Podcast: Father James Martin on his meeting with Pope Francis 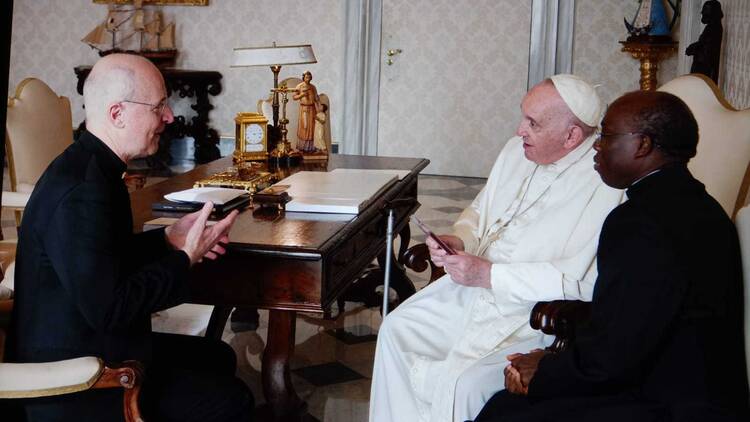 Fr. James Martin speaks with Pope Francis with the help of a translator. (Photo courtesy of James Martin, S.J.)

Pope Francis met with America editor-at-large James Martin, S.J. in the Vatican’s apostolic palace on Nov. 11 for 45 minutes. This week on “Inside the Vatican,” Father Martin joins hosts Colleen Dulle and Gerard O’Connell to discuss their exchange, which focused mostly on ministry to LGBT Catholics.

Gerry explains the significance of the meeting’s duration—about twice as long as most heads of state have with the pope—and its location. “It’s a message to be received in the apostolic palace,” Gerry says on the podcast. “It means that the pope wants this known publicly.”

In the second half of the show, Gerry and Colleen dig into Pope Francis’ message for this year’s World Day of the Poor, and how the pope hopes that his initiatives for the day will trickle down to dioceses around the world.

Finally, the hosts give an update on the case of French Cardinal Jean-Pierre Ricard, who despite publicly confessing to abusing a 14-year-old girl remains a cardinal with full privileges, including the ability to vote in a conclave. The Vatican now says it will investigate the cardinal after French prosecutors have finished their own investigation. Despite the confession, the cardinal has neither been removed nor suspended from ministry, although he admitted in his letter of confession that he would go on retreat to pray and meditate on his actions.

“I have been here long enough in the Vatican to see we get statements [that] say something to satisfy the public demand, but they don’t give the whole story,” Gerry tells Colleen. “So, I would not exclude that other things are happening behind the scenes [at the Vatican].”

Pope Francis on World Day of the Poor: Do not listen to ‘prophets of doom’ but instead ‘light candles of hope.’

Cardinal Ricard confessed to abusing a 14-year-old. What we know and what the Vatican will do next