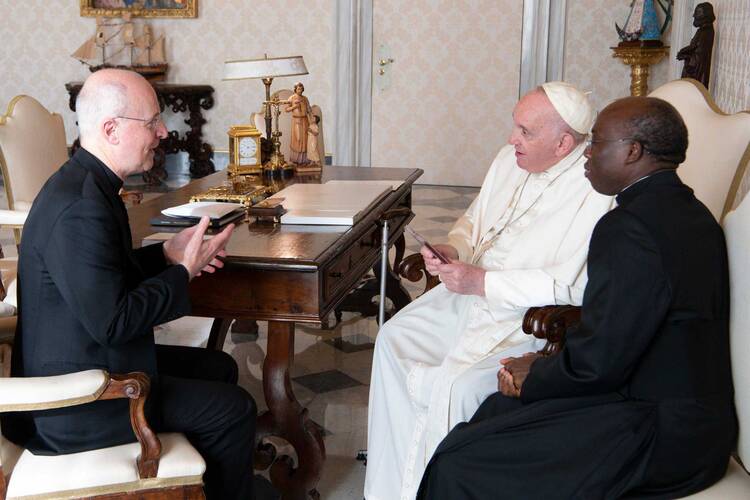 Pope Francis received James Martin, S.J., for the second time in private audience in the papal library of the Vatican’s Apostolic Palace this morning, Nov. 11.

Father Martin, an editor at large at America, is known as one of the leading figures in the U.S. Catholic Church for his pastoral ministry and outreach to L.G.B.T.Q. Catholics. He has been criticized and attacked for this pastoral work by some in the U.S. church, including clergy and a few bishops.

“This morning’s audience was amazing. It lasted 45 minutes and was punctuated with a lot of laughter. It was very warm, very inspiring, and very encouraging,” Father Martin said. Francis spoke in Spanish and conducted the audience with the aid of an interpreter. Early on in their conversation, however, Father Martin read in Spanish a brief summary paper “of the lights and shadows of L.G.B.T.Q. Catholics” that he had prepared in advance. He would not disclose the contents of that paper or indeed any other aspect of their conversation, except to say, “we had a very friendly and warm conversation. He laughed a lot.”

“He was incredibly supportive of me,” Father Martin said.

“This morning’s audience was amazing. It lasted 45 minutes and was punctuated with a lot of laughter. It was very warm, very inspiring, and very encouraging,” Father Martin said.

He revealed that he gave the pope a gift of an icon of “Christ the Life Giver,” a copy of the icon that hung in the Jesuit novitiate where he once studied.

Francis “looked in great health,” he said, and when at the end of the audience Father Martin knelt for his blessing, the pope stood up to give it.

It was the second time that Francis has received him in this way. Their first meeting was on Sept. 30, 2019, when the pope received him in the same library for a 30-minute private audience in what was seen in Rome at that time as a significant public gesture of support and encouragement for this American Jesuit, who is known internationally for his pastoral ministry to L.G.B.T.Q. people and as a public speaker and author. His best-selling book,Building a Bridge: How the Catholic Church and the LGBT Community Can Enter into a Relationship of Respect, Compassion, and Sensitivity, published in 2017, has been translated into several languages.

On that first occasion, Father Martin said: “I shared with Pope Francis the experiences of L.G.B.T. Catholics around the world, their joys and their hopes, their griefs and concerns. I also spoke about my own ministry to them and how they feel excluded.” He concluded then, “I saw this audience as a sign of the Holy Father’s care for L.G.B.T. people.”

They have met briefly on other occasions, but the Sept. 2019 encounter was the first substantial private conversation that he had with the pope in his private library, where he meets heads of states and international organizations, cardinals and bishops’ conferences, leaders of the other Christian denominations and of the world’s major religions, as well as distinguished persons. By choosing to meet him in this place, Pope Francis made a statement in 2019 and again today. After his meeting with Father Martin, Pope Francis received the Dutch bishops for their ad-limina visit. Father Martin came to Rome for the plenary meeting of the Dicastery for Communications of which he is a consultor.

In between these two private audiences, Father Martin has communicated with the pope on various occasions and has received encouraging responses for his pastoral ministry to L.G.B.T.Q. persons. On the eve of the Outreach June 2021 L.G.B.T. Catholic ministry conference that took place by webinar, he received a handwritten letter in Spanish from Francis expressing his encouragement and support for this work.