Cardinal Ricard confessed to abusing a 14-year-old. What we know and what the Vatican will do next 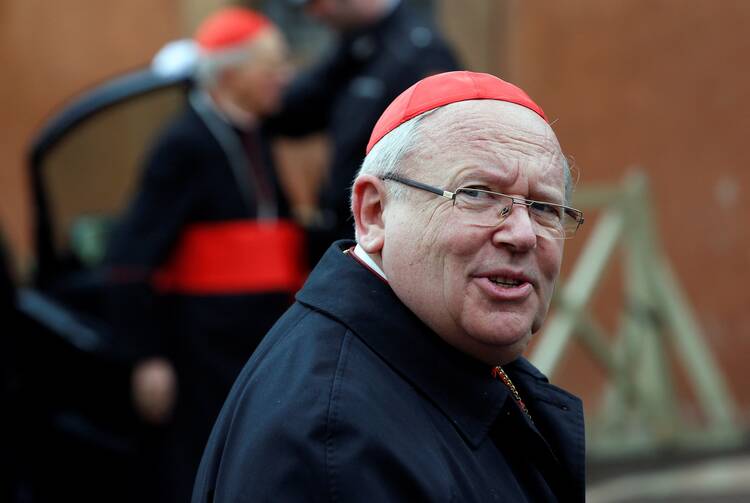 French Cardinal Jean-Pierre Ricard of Bordeaux is pictured in a 2013 photo at the Vatican. The Vatican will begin an investigation of Cardinal Ricard, who admitted in a public letter that he had abused a 14-year-old girl 35 years ago. (CNS photo/Alessandro Bianchi, Reuters)

On Monday, Nov. 7, Archbishop Eric de Moulins-Beaufort of Rheims, the president of the French bishops’ conference, read aloud a shocking letter from the former conference president Cardinal Jean-Pierre Ricard, in which the cardinal wrote, “Thirty-five years ago, when I was parish priest, I behaved in a reprehensible way with a 14-year-old girl.” The letter was read during a press conference on sexual abuse in church settings, which was held during a meeting of the French bishops.

The letter is only the latest in a series of abuse revelations that have rocked the French Catholic Church since the release of last year’s report by the Independent Commission on Sexual Abuse in the Church, also called the Sauvé Commission, which found that more than 200,000 minors—with estimates of up to 330,000—had been abused by clergy or church employees since 1950. In the same address to the bishops in which Archbishop Moulins-Beaufort read Cardinal Ricard’s letter, the archbishop also said that 11 current or former French bishops were accused of abuse; that is, almost 10 percent of the French episcopate. Eight bishops are being investigated for abuse and three for cover-up.

Many questions remain concerning Cardinal Ricard’s revelation. Here are a few of the most pressing.

Cardinal Ricard did not admit explicitly to sexually abusing a 14-year-old girl; rather, he phrased it as “behav[ing] in a reprehensible way,” adding, “My behavior necessarily caused serious and lasting consequences for this person.”

He said he had sought forgiveness from the victim and her family. A report published in La Croix on Nov. 10 revealed that the victim had contacted the Vatican twice about the case; the second time, when she reached out via the pope’s nuncio in May or June of this year, the nuncio confirmed he had received her message.

Many questions remain concerning Cardinal Ricard’s revelation. Here are a few of the most pressing.

It remains unclear how much the Vatican knew about Ricard’s case, or whether they were given any advance notice before the cardinal’s letter was made public.

Vatican spokesman Matteo Bruni announced Nov. 11 that the Vatican would open an investigation into Cardinal Ricard.

​​“As a result of the elements that have emerged in the last few days and the statement made by the cardinal, in order to complete the examination of what happened, it has been decided to initiate an ‘investigatio praevia,'” or preliminary investigation, Matteo Bruni, the director of the Vatican press office, said.

Mr. Bruni would not say whether the decision was made by Pope Francis, although because the case involves a cardinal who is a member of Vatican dicasteries and who, at 78, is still eligible to participate in a conclave, people familiar with the workings of the Vatican assume the pope had to agree. His 2021 reforms to the church’s penal code allow for the 20-year statute of limitations for “grave offenses” to be waived when necessary.

Pope Francis’ 2021 reforms to the church’s penal code allow for the 20-year statute of limitations for “grave offenses” to be waived when necessary.

The question of whether Cardinal Ricard will remain a member of the College of Cardinals and able to vote in a conclave also remains. Pope Francis removed former cardinal Theodore McCarrick from the college and, subsequently, from the priesthood, leading some to speculate that the Vatican could follow the same formula in dealing with Cardinal Ricard.

The announcement of the Vatican investigation comes after French authorities said they were opening their own investigation into the cardinal. While the Marseille prosecutor’s office has already announced that it is opening an investigation of Cardinal Ricard for “aggravated sexual assault,” no complaint has been filed against the cardinal yet.

As of now, Cardinal Ricard remains a member of the Dicastery for the Doctrine of the Faith, the Vatican body tasked with handling abuse cases.

It remains to be seen whether an investigation would lead to a criminal trial of the cardinal, given that the French statute of limitations for rape victims who were minors at the time of their assault only extends 30 years after the victim reaches the age of majority, 18, meaning one could file a complaint until age 48. This 30-year statute was revised last year; previously, the statute was 20 years.

According to Cardinal Ricard’s letter, his victim is just outside the statute of limitations at age 49. The statute for this case could be extended if another, younger victim were to file a complaint against the cardinal, to 30 years after that person had reached the age of majority. Cardinal Richard, however, made no mention of any additional victims.

According to Mr. Bruni, the Vatican spokesman, the Vatican’s customary practice would be to wait until the French civil authorities have closed their case to begin any kind of canonical procedure, in which case the Vatican could request documentation from the judicial authorities to use in their process as well.

The cardinal wrote in his letter that he is now “tak[ing] a time of withdrawal and prayer” and awaiting any decisions from church or civil authorities.