Archbishop Broglio, questioned on abuse, homosexuality and whether he’s a ‘Pope Francis’ bishop in first press conference as USCCB head 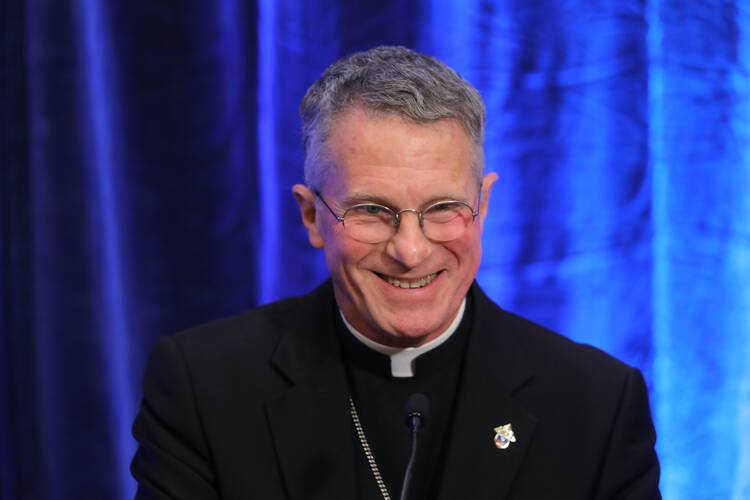 Archbishop Timothy P. Broglio of the U.S. Archdiocese for the Military Services, smiles during a Nov. 15, 2022, news conference after being elected president of the U.S. Conference of Catholic Bishops during the fall general assembly of the bishops in Baltimore. (CNS photo/Bob Roller)

If his first press conference is any indication of what is in store for him over the next three years, Archbishop Timothy Broglio, the president-elect of the U.S. Conference of Catholic Bishops, may be in for a bit of a bumpy ride—and with him the church in the United States. In just a few short minutes after being introduced to the press for the first time as president-elect of the conference on Nov. 15, the archbishop was asked about his past relationship with Cardinal Angelo Sodano, whether or not he still believed that homosexuality in the priesthood was among the primary drivers of the church’s clerical abuse crisis and, finally, whether his election to the U.S.C.C.B presidency signified a continued estrangement among bishops in the United States from the aims and hopes of Pope Francis for the global church.

Archbishop Broglio neatly batted away each challenging question without losing his cool, but the tough Q&A suggests that his past will affect perceptions of his impending leadership, at least until he is able to do something about changing them when he begins his tenure after the end of this fall assembly in Baltimore on Nov. 17.

He was lauded by many who cheered his election as a “staunch” opponent of abortion and the kind of leadership required “at a time when the Church in the U.S. desperately needs unity.” Writing in The Catholic World Report, Michael Heinlein expressed a hope that a talk on the Eucharist given by the archbishop in 2013 could “help chart a way forward amid our new Eucharistic controversies.”

If his first press conference is any indication of what is in store for him over the next three years, Archbishop Timothy Broglio, the president-elect of the U.S.C.C.B., may be in for a bit of a bumpy ride.

But some online reaction to the archbishop’s election in certain church precincts suggested misgivings about his leadership. Some lay people and theologians had been hoping that this episcopal election cycle might result in the ascendancy of a “Francis” bishop, a conference leader more in step with the pope’s pastoral vision and style and less inclined to engage as a culture warrior.

Archbishop Broglio’s predecessor, Archbishop José Gomez of Los Angeles, had acknowledged the election of a Catholic, Joseph Biden, to the U.S. presidency in 2020 by admonishing the president because of his embrace of his party’s pro-choice position on abortion, beginning what became a fractious discussion of whether or not pro-chioce politicians could receive Communion. Archbishop Gomez never met with Mr. Biden, but asked if he would be interested in such a meeting, Archbishop Broglio said, “If [President Biden] wants to meet with me, I’ll be happy to meet with him.”

The archbishop said he welcomed any opportunity “to dialogue with political leaders in the United States.” “I don’t see my role as primarily political,” he said, “but if there is any way to insert the Gospel into all aspects of life in our country, I certainly will not miss any occasion to do that. I know that there has been a great desire on the part of the outgoing presidency to meet with the president—that hasn’t been possible. If it’s possible in the future I will certainly take advantage of that opportunity.”

The new president-elect declined to speculate about the significance of his election in terms of the conference’s relationship with Pope Francis, suggesting to reporters that they ask his brother bishops why they had voted for him because “I really don’t know the answer to that question.”

“I’m most certainly in communion with Pope Francis,” Archbishop Broglio said, describing the pope as a “brother bishop.”

“I’m most certainly in communion with Pope Francis,” he added, describing the pope as a “brother bishop.”

“We certainly know each other,” Archbishop Broglio said, “and I’m not aware that this [election] necessarily indicates some dissonance with Pope Francis.”

Last year, Archbishop Broglio attracted national attention when he asserted that servicemembers should be able to receive religious exemptions from a Pentagon mandate that all troops receive Covid-19 vaccinations.

“Notwithstanding the moral permissibility of these vaccines, the Church treasures her teaching on the sanctity of conscience,” he said in October 2021. “Accordingly, no one should be forced to receive a Covid-19 vaccine if it would violate the sanctity of his or her conscience.”

In 2013 he spoke out against the military recognizing gay marriage. “This new policy under the guise of ‘equal benefits,’” he said, “undermines marriage as the union of one man and one woman because it treats two persons of the same sex as spouses.”

Archbishop Broglio, 70, was elected to a three-year term from a field of 10 candidates. He will succeed Archbishop Gomez, who assumed the post in 2019.

Archbishop Broglio was made a bishop by St. John Paul II in 2001, immediately after working as chief of cabinet from 1990 to 2001 for the late Cardinal Sodano, then Vatican secretary of state. Archbishop Broglio was appointed to the Archdiocese for the Military Services, USA, in 2007 by Pope Benedict XVI.

He has been an advocate for members of the U.S. military around the world and regularly visits U.S. service members as part of his responsibilities in leading the military archdiocese. In an article for America in 2009, he urged that more resources be devoted to returning veterans suffering from post-traumatic stress disorder. Archbishop Broglio has also been an advocate for pro-life causes.

Archbishop Broglio was questioned by press about his experience under Cardinal Sodano when allegations of sexual abuse.

Archbishop Broglio was questioned by press about his experience under Cardinal Sodano when allegations of sexual abuse—including most notoriously reports about the serial abuser, drug addict, embezzler and founder of the Legion of Christ, the Rev. Marcial Maciel—were suppressed by Cardinal Sodano’s office.

He responded: “I think I would say two things about that. First, that hindsight is always 20-20. So many things that we’ve learned now, perhaps, certainly weren’t known then, and my own experience, working in Cardinal Sodano’s office, the main question would have been about [Father Maciel], and I think at that point, he had everyone fairly well-buffaloed because there were so many vocations.” He added, “I had actually left the office by the time the great accusations came up.”

Archbishop Broglio concluded, “I think these things are always a good reminder that we have to be attentive, and we have to be proactive, and I think certainly the U.S. conference of bishops has given us a good example of that.”

Allegations against Maciel, now deceased, accelerated in the 2000s, but they initially came to light in a major report in 1997 by the Hartford Courant, which detailed accusations against him by eight former Legion seminarians, children at the time of their abuse.

Archbishop Broglio said, “I intend to continue the good work that Archbishop Gomez began…by giving us a good example of listening but then also an example of leading.”

Archbishop Broglio argued in 2018 that “there is no question that the crisis of sexual abuse by priests in the USA is directly related to homosexuality. [Ninety percent] of those abused were boys aged 12 and over. That is no longer pedophilia.” A study released in 2011 by the John Jay College of Criminal Justice, commissioned by the bishops, had found that homosexuality was not a cause of abuse by priests, which researchers argued were crimes of opportunity by pedophiles.

Asked if he stood by that statement today, he said, “It’s certainly an aspect of the sexual crisis that can’t be denied.

“That’s certainly not to point a finger at anyone,” he added, “but I think it would be naïve to suggest that there’s no relationship between the two.”

Asked how he intended to lead the nation during a period of great division within the body politic and the church, Archbishop Broglio said, “I intend to continue the good work that Archbishop Gomez began…by giving us a good example of listening but then also an example of leading.”

He added, “I think that the bishops have made great strides working together and talking to one another. Hopefully this process will continue.”