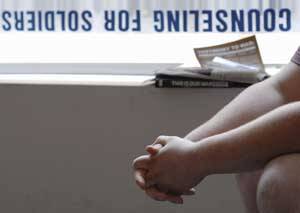 Our country is at war. Although there has been no declaration of war, thousands of young men and women—our brothers, sisters, sons, daughters and neighbors—have been sent to the Middle East and elsewhere as members of the United States military. Many have experienced the effects of war: tension, aggression, separation from loved ones, hostile conditions, wounds and the unexpected. Some have returned physically maimed; others have damaged psyches.

Many questions about U.S. policy in the Middle East can and should be raised. My role here, however, is as the shepherd of Catholics in the U.S. military responding to an ongoing pastoral situation: Returning veterans are in need, and all of us can offer solace and support. Christians bear a responsibility to those coming back from military service and to their families. Jesus tells us that our ability to see and respond to anyone in need not only determines how we will be judged but is the way in which we meet the Lord himself (Mt 25:31-46).

Remember the parable of the rich man and Lazarus? It always strikes me that the rich man is not particularly evil. We are not told that he mistreated Lazarus or denied him the scraps from his table. Rather, he never noticed Lazarus until he perceived that the beggar could be useful in relieving the rich man’s torment in the afterlife. Do we see the needs of returning military personnel?

Post-traumatic stress syndrome is not new. Since the Civil War the ill-effects of combat have been described. Shell shocked was the expression used after World War I, battle fatigue after World War II. Post-traumatic syndrome currently affects 22 percent of those who have served in Iraq or Afghanistan. It is widely believed that many more military personnel, perhaps all who have served in wars, are afflicted to some degree. Last year in a medical facility, I visited a young marine who was completely unresponsive. Not only could he not speak; despite his youthful, strong appearance he simply sat in his room and stared. His case was extreme.

Some in the military who are afflicted do not seek help. Those still on active duty might be reluctant; they may fear discharge, which in the current economic situation could easily mean unemployment. Others no longer on active duty may worry about harm to their post-service career. Some do not even realize that they have been adversely changed.

The symptoms include distressing recollections, nightmares and flashbacks to events in the war zone. Military personnel have seen comrades violently killed and experienced explosions at close quarters—events they try to keep from their minds. Some avoid activities that used to bring them pleasure. They feel detached, unable to love anyone. Sleep may be difficult, which leads to increased irritability, outbursts of anger and an exaggerated concept of how much vigilance is necessary. If one or more of these symptoms persist longer than a month or two, then the person is likely suffering from a disorder.

The syndrome affects a victim’s family. After experiencing the hardship of separation, family members find themselves reunited with a person who seems unknown. Tension results from the simplest situations. Misunderstandings are common.

What can we do as individuals and as Catholic communities? First, recognize what is going on (in biblical terms, see Lazarus at the door), then take up our duty to love him or her and consider how best to help. Second, we can all pray for our military personnel and their families, asking God unceasingly for peace and understanding in our world.

Third, we can “turn down the volume” in our society. One of the most striking changes I have noticed in returning to the United States after 29 years of residence abroad is the abrasiveness of our discourse. Across the political spectrum people write and speak without any attempt at civility. Being convinced that my belief is correct is no excuse to shout at my neighbor, call him names or question his sincerity. If we would treat everyone with kindness, as created in the image and likeness of God, we would render the Gospel more accessible to our world. It would also contribute to the returning veteran’s tranquility and ease.

Fourth, while medical care and rehabilitation of veterans are responsibilities of the Armed Forces and the federal government, we can make a difference in our parishes by seeking out returning veterans. As a community, we can help them adjust to the rhythm of life here. Shaken by the atrocities of war, some veterans need time and assistance to refamiliarize themselves with those dearest to them. Assistance might mean babysitting, gratis; or a tax expert might volunteer services to help a vet with the family budget or I.R.S. forms. A lawyer might help resolve a claim or a mechanic repair the family car. A psychologist or psychiatrist or teacher could help families through the transition. Any one of us could listen as a returning military man or woman tells us his or her story. That has an amazingly positive effect on persons who suffer from post-traumatic stress syndrome.

As Catholics we can welcome home wounded members of our community. Fundamentally the issue is not about donating resources, though that can help, but about giving of ourselves and of our time. We cannot lose the value of solidarity. Giving of our time, attentiveness to others and the search for an encounter with Christ in the returned veteran who is in need—these actions are possible now. Members of our military have been sent to fulfill a difficult task. They deserve our gratitude and our welcome home.

Most Rev. Timothy P. Broglio is archbishop for the military services, U.S.A.

Show Comments (
3
)
Comments are automatically closed two weeks after an article's initial publication. See our comments policy for more.
john vercellone
13 years 3 months ago
one topic that should be public information about american catholics in the usa military is the very very low number of catholic chaplains for them.it in my opinion one of the first obligation to usa catholics in the usa military that they have catholic spiriitual support while in thier high risk duties to being killed or injured and/also to kill and to injure others.i would think that catholic chaplains from 1940 on to the gulf war were in much,much higher ratio for usa catholic servicepeople..it is time to to take a more realistic view of the preist shortage in the usa,and that would include less austere liife styles after odination and that would be a moderate pension option after 20years of pastoral care to move on to the secular society or a new definition of marraige and the deaconate as an option than entering the secular world after the 20years of preistly functions-i dotn think it would be an enourmous financial burden to provide a moderate pension after 20yeaqrs of pastoral service,if the church starts to reexamine what it has been spending money on(and it appears that it wasnt for provding catholic spiritual help to the less forunate insociety as was a usa catholic tradition up to 1980..  blacklisted italo american roman catholic health professional
13 years 3 months ago

Funny, I don't recall reading ANYTHING about 'how abrasive' politics got during the previous 8 years...I guess when a Republican is President it's OK to have books, plays, and short movies glorifying his assassination... and that's in no way a 'coarsening' or uncivil way to proceed....until it is.

As for returning vets... yes, PTSD is a devastating phenomena. Losing one's best friend in a horrific way, or alternatively being blasted away from one's best friends via some trauma is a real load for anyone to carry alone. Unfortunately many of our military got the GW Bush treatment from the so-called "peace movement" crowd from 2002 to 2008. It's only now that some, from the mysteriously vanished movement are acknowledging that military personnel are not responsible for public policy and shouldn't be targetted with blame for foreign policy. I applaud those who take the time to visit our military hospitals, support those non-profits who do great work helping rehabilitate wounded veterans and support their families. But let us not turn a blind eye to the real guilt of those who spent 6 years demonizing these young people as proxies for their hated political opponents. Those among us who did this must repent, seek to make amends and learn to suspend judgment until they actually know the facts.

Yes, of course the bishop is right that these American victims of war must receive our compassion and care.  That goes without saying.  But it troubles me that Bishop Broglio expresses not even the slightest hint of concern for the tens of thousands of innocent civilians we killed in Iraq in a war two popes judged to be unjust. Are they not children of God?  Dare we ignore Jesus' teaching to love our enemies? Have we not yet internalized the lessons of the parable of the Good Samaritan? Have we become "cafeteria Christians"?