Cardinal Angelo Sodano, Vatican Secretary of State under two popes, has died at 94 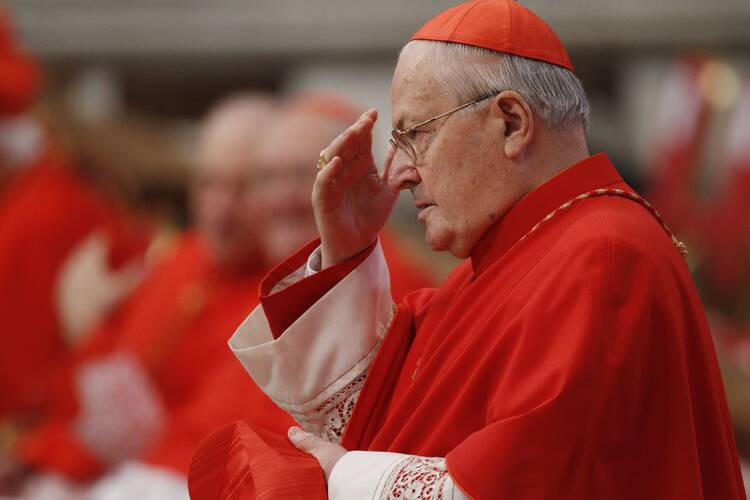 Cardinal Angelo Sodano, dean of the College of Cardinals, makes the sign of the cross during a Mass celebrated by Pope Benedict XVI in St. Peter's Basilica at the Vatican in this Nov. 21, 2010, file photo. (CNS photo/Paul Haring)

Cardinal Angelo Sodano died in a Rome hospital last night from complications related to Covid-19, and other ailments related to his advanced age. The 94-year-old cardinal served as the Vatican Secretary of State under John Paul II and Benedict XVI. He was the dean of the college of cardinals for 15 years.

“The passing of Cardinal Angelo Sodano stirs in my soul sentiments of gratitude to the Lord for the gift of this esteemed man of the church,” Pope Francis said in a telegram of condolence to the cardinal’s sister. The cardinal “lived his priesthood with generosity,” the pope said, recalling the cardinal’s “diligent work alongside many of my predecessors, who entrusted important responsibilities to him in Vatican diplomacy, culminating in the delicate office of Secretary of State.”

Pope Francis also remembered the cardinal’s “exemplary dedication” as a Vatican diplomat in Ecuador, Uruguay, and Chile. “He devoted himself zealously,” the pope said, “to the good of those populations, promoting dialogue and reconciliation.”

The 94-year-old cardinal served as the Vatican Secretary of State under John Paul II and Benedict XVI.

Pope Francis expressed he had personally benefited from the cardinal’s “gifts of mind and heart” in his role as dean of the college of cardinals. “In every task,” Pope Francis said, “he showed himself to be an ecclesially disciplined man, and an amiable pastor, inspired by the desire to spread the leaven of the Gospel everywhere.” The pope extended his condolences to the cardinal’s family and expressed his gratitude to the Sisters of Saint Marta who, he said, “lovingly assisted the cardinal.”

“He was a great priest and a great diplomat,” a Vatican official, who worked with him for several years but preferred not to be named because of the position he holds today, told America. “He was a good superior and very kind. He respected those who worked for him and relied on their counsel and their contribution. He was very organized, a hands-on manager who could move the dossiers quickly. He was a man of government.”

“He was a great priest and a great diplomat,” a Vatican official told America.

After ordination to the priesthood on 23 September 1950, he spent the first years of his priestly life teaching theology at the diocesan seminary and working with youth, before going to the Pontifical Ecclesiastical Academy, where he was trained as a Vatican diplomat. He joined the Vatican’s diplomatic service in 1959 and served missions in Ecuador, Uruguay and Chile.

Cardinal Sodano was not only a big man, physically, he was also a large figure at the Vatican, where he exercised extraordinary influence in the Roman Curia and in the global Catholic church.

Paul VI called Sodano to the Vatican in 1968, to serve in the Council for Public Affairs of the Church, an office now known as the Section for Relations with States in the Secretariat of State. While at the council, he made diplomatic trips to Romania, Hungary and East Germany. In November 1977, Paul VI appointed him as the apostolic nuncio to Chile and ordained him archbishop.

He served in Chile for 10 years and was there through the pontifical mediation that brought a peaceful resolution to the dispute between Chile and Argentina over three territories in the Beagle Channel.

Cardinal Sodano was a large figure at the Vatican, where he exercised extraordinary influence in the Roman Curia and in the global Catholic church.

But Cardinal Sodano’s legacy is not an uncontroversial one. People within and outside the Vatican question the role he played as nuncio in Chile (1977-88) when the country was under the military dictatorship of General Augusto Pinochet, with whom the cardinal was close. At the same time, his critics also acknowledge that he arranged for the leaders of the opposition to Pinochet to meet with John Paul II during his visit to Chile in 1987.

As nuncio and later as Secretary of State under the instruction of the Polish pope, archbishop and later Cardinal Sodano presided over the nomination of far-right bishop-candidates. Several of those appointed bishops were later found guilty of sexual abuse and, during a crisis that has devastated the Chilean Catholic Church, were subsequently removed from office by Pope Francis.

The cardinal was also widely criticized when, as nuncio and in the senior positions he later held in the Roman Curia, he took strong stances against liberation theology in Latin America, though not without approval of John Paul II.

The cardinal was also widely criticized for taking strong stances against liberation theology in Latin America.

At the behest of John Paul II, from May 1988 through December 1990, Archbishop Sodano was made what is commonly referred to as the Vatican’s foreign minister. He was later promoted to Secretary of State and served in this role until John Paul II died on April 2, 2005. When Benedict XVI was elected pope, he briefly renewed the cardinal in this role until September 2006. In 1991, he was made a cardinal.

The Vatican official mentioned earlier recalled the extraordinary efforts Cardinal Sodano made as Secretary of State, after the fall of the Berlin Wall and the collapse of communism in Eastern Europe, to reach international agreements between the Holy See and the former Soviet states, and to support the work of the church in those lands, among them Hungary, Slovakia, Croatia and Slovenia.

Cardinal Sodano, as Secretary of State, accompanied John Paul II on his visits to countries on all continents and played a major role in the final stage of his pontificate. He was elected vice dean of the College of Cardinals in 2002 and, after the pope’s death, as cardinal elector, he participated in the conclave that elected Benedict XVI as pope in April 2005.

The strongest criticism of Cardinal Sodano came, undoubtedly, for his role in the Vatican’s handling of the clerical sexual abuse of minors.

The strongest criticism of Cardinal Sodano came, undoubtedly, for his role in the Vatican’s handling of the clerical sexual abuse of minors. He was accused of blocking the Congregation for the Doctrine of the Faith from taking action against the Rev. Marcial Maciel, the Mexican founder of the Legionaries of Christ, despite numerous allegations of crimes of sexual abuse of young men and other immoral acts. The cardinal has also been condemned for his strong support, defense and protection of the Legionaries. It is widely claimed such action was taken in close collaboration with the private secretary of Pope John Paul II, who is now Cardinal Stanisław Dziwicz.

The cardinal’s history of alleged coverups is not limited to the notorious Mexican pedophile-priest. In 2010, Cardinal Christoph Schönborn of Vienna publicly accused Cardinal Sodano of also blocking a 1995 investigation by the Congregation for the Doctrine of the Faith into allegations that Cardinal Hans Groër, the former archbishop of Vienna, Austria, had sexually abused seminarians in his archdiocese.

Others have accused Cardinal Sodano, when he was secretary of state, for not taking strong enough action against the promotion of Theodore McCarrick as archbishop of Washington and later as cardinal.

Cardinal Sodano was elected dean of the college of cardinals in April 2005, a post he held until December 2019. As dean, he convened the conclave that elected Pope Francis, but he could not vote in that conclave as he was over the age of 80.