Baseball and forgiveness: It’s time for me to put my Astros grudge in the trash can 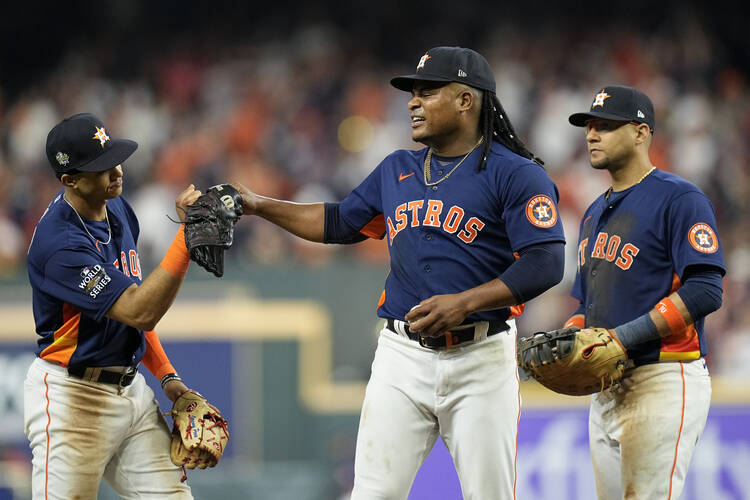 Houston Astros starting pitcher Framber Valdez, center, speaks with Jeremy Pena, left, on the mound during the seventh inning in Game 2 of baseball’s World Series between the Houston Astros and the Philadelphia Phillies on Saturday, Oct. 29, 2022, in Houston. (AP Photo/Eric Gay)

In 2017, I watched the Houston Astros win the World Series with my mom. I have a lot of friends in Los Angeles, so a big part of me wanted the Dodgers to win. But my mom was definitely pulling for the Astros for other reasons.

That August, Hurricane Harvey had crushed Houston. More than four feet of rain flooded the bayous and the city was submerged. Then, less than a month later, two hurricanes—Irma and Maria—ravaged Puerto Rico. A couple of Houston’s players were from Puerto Rico—including Carlos Correa and Carlos Beltrán. The team and its players did a lot for hurricane relief in Houston and Puerto Rico.

Those stories were enough for my mom. When the Astros won, it seemed like they were playing for something more than themselves. They played for their beautiful, diverse city and the devastated island of Puerto Rico. I felt bad for my friends in L.A., but it also felt right for Houston to win that year. The city needed it.

When the Astros won, it seemed like they were playing for something more than themselves. They played for their beautiful, diverse city and the devastated island of Puerto Rico.

Two years later, the world learned that the Astros had been cheating. In 2019, former Houston pitcher Mike Fiers shared with The Athletic that his former team used a camera in center field to steal signs from the opposing team’s catcher. By banging on a trash can, or perhaps whistling, the Astros alerted fellow players in the batter’s box of the kind of pitch that was coming. (Social media is replete with examples of how the team did it.)

Major League Baseball launched an investigation and Commissioner Rob Manfred released a report in January 2020 that confirmed Mr. Fiers’s claims. I watched the video reports on ESPN, and while some of the players looked embarrassed and apologetic, others just shrugged it off. The investigation found that the Astros’ owner, Jim Crane, was unaware of the sign stealing. Some coaches were suspended for a year and team ownership was fined $5 million. The team lost draft picks. But the players themselves received no punishment from the commissioner’s office, and the Astros were not stripped of the 2017 championship.

This year, the Astros are back in the World Series, playing the Philadelphia Phillies. A lot of baseball fans are pulling for the Phillies, or at least against the Astros. I was watching one of the games with my son, and José Altuve, who had been one of the most likable players on the 2017 team, stepped to the plate.

Before I’m a baseball fan, I’m a Christian. And Jesus is pretty clear about forgiveness.

I had a kind of spontaneous examination of conscience. Something felt terribly wrong. My child was watching a World Series game and seemed resentful. Then I saw my own resentment.

“Poor José Altuve,” I heard myself blurt out. My son made a face at me. But I began to think about how, at every stadium except the Astros’ Minute Maid Park, Mr. Altuve is mocked. Fans of opposing teams boo him and bring homemade signs to berate him. They cheer when he fails.

I get it, of course. I’m still angry about 2017. Baseball is practically sacred to me and my family. It hurt to learn that the team that rallied for hurricane victims was the same team that cheated their opponents—and baseball fans—of a fair game.

The Astros said they did not cheat in the 2017 World Series. But there were reports—from an anonymous Astros player no less—that then-Dodger’s player Yu Darvish tipped his pitches in the series. Such reports seem dubious now. Mr. Darvish, one of my favorite players, has had to live with the personal and professional consequences of losing two games in that series—and it may not have been his fault.

I’m not forgiving the Astros because they deserve it. In forgiving, I will be set free.

Nothing about what the Houston Astros did was O.K., and it hurt a lot of people. To me, what they did is worse than the infamous scandal involving the 1919 White Sox, in which players accepted bribes to lose the World Series. Those White Sox players, who lived paycheck to paycheck, received lifetime bans from the sport. But the 2017 Astros, many of whom are millionaires? Well, they’re playing in another World Series, their fourth in the last six years.

I have so many reasons to justify my resentment. But I have one very important reason to let it go. Before I’m a baseball fan, I’m a Christian. And Jesus is pretty clear about forgiveness. See, for example, the prodigal son or the lost sheep. Or the Our Father! To the woman caught in adultery, the Lord says, “I do not condemn you.”

Well, José Altuve, how then can I condemn you?

Why, five years later, do I allow this bitterness to linger? I cannot change what happened in 2017, and I cannot change the punishment that was handed down. But I can decide to let go—or at least begin to let go—of this and other grudges I bear.

Perhaps the Astros will suffer the karmic curse of the 1919 White Sox—the team did not win a World Series until 2005. Or perhaps they’ll beat the Phillies this year. But whatever happens in the series, I now name this festering resentment for what it is: poison. And I’ve had quite enough. I’m not forgiving the Astros because they deserve it. In forgiving, I will be set free.