Lizzo’s theology of the body 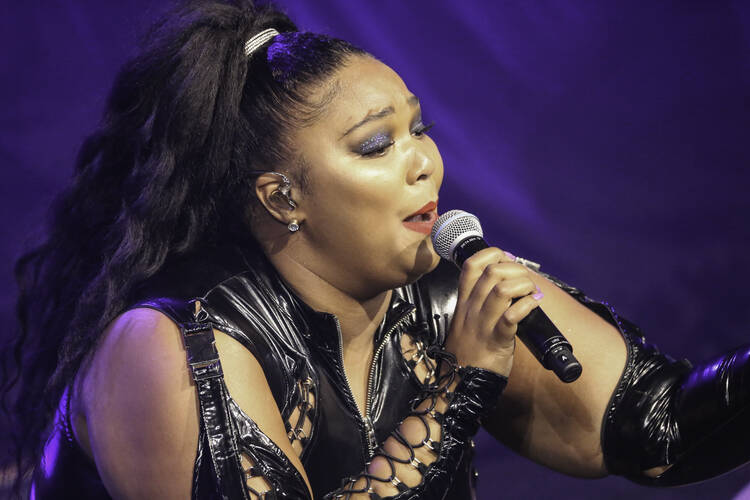 Lizzo performing at the Palace Theatre in May 2018 (Wikimedia)

My kids were astonished to hear that I love Lizzo. But how could you not? The woman radiates joy. Generosity of spirit flows from all her limbs, and her face shines with happiness. Happiness! When’s the last time you saw someone on stage who looks happy?

But I was kidding when I said, “How could you not love Lizzo?” The internet is flooded with people who find it very easy not to love her. The other day, I mentioned offhand that I wish my mother had lived to see her perform, and I was informed that Lizzo is disgusting, that she’s perverted, she has no self-respect, that she’s degrading the culture, and of course that she celebrates obesity, which, in case you haven’t heard, is unhealthy. Such courage, coming out and taking a public stand against fat people!

Part of me understands the discomfort. Lizzo is a lot. Her lyrics are smart and funny and clever but also sometimes fairly raunchy. Her outfits are sometimes gorgeous and elegant, sometimes deliberately outrageously revealing. I watched her strut onto a jet wearing jeans that had a window instead of a rear end. And of course, horror of horrors, she twerks.

Lizzo is incontrovertibly provocative, but I am not sure it is lust she is trying to provoke. Instead, she is provoking people to simply…deal with her.

But the thing about Lizzo is she does not seem to be doing any of this to turn you on. She is incontrovertibly provocative, but I am not sure it is lust she is trying to provoke. Instead, she is provoking people to simply…deal with her. And she is provoking people to deal with themselves, as they are. In a post-Christian world, for an audience of people who are radically alienated from any idea of the inherent goodness of creation, it is the closest thing to theology of the body I have seen.

Let’s be clear: This is not some coy argument that she is secretly Catholic. She absolutely is not. She’s a pro-choice, sex positive and plenty of things a Catholic really should not be. Pope John Paul II’s groundbreaking series of 129 scholarly lectures regarding the spiritual meaning of the human body and sexuality makes very specific claims, and they are about much more than just liking yourself and being upbeat.

But so is Lizzo. I encourage everyone to read her recent interview in Vanity Fair magazine, for some truly refreshing, occasionally moving insights into the mind of a thoughtful, intentional, hilarious young woman who is so much more than the raunchy provocateur some folks make her out to be.

Also vital to understand: Lizzo’s audience is not fresh and innocent young folks who would otherwise be sitting on a park bench practicing their embroidery, but because of her spangled thongs and her shenanigans, they suddenly become exposed to sex. They are people who are already several generations into a heavily degraded culture, where the most overt objectification and pornification of the body, by men and by women, is absolutely the norm and has been for some time. She is offering a course correction—one she is uniquely and enthusiastically able to provide.

Lizzo is saying: “Hello, yes, the human body. What a good thing it is. Stop being so afraid. Stop freaking out. Stop hiding from it, and stop using it as a weapon. Stop using it, period.”

She is saying: “Hello, yes, the human body. What a good thing it is. Stop being so afraid. Stop freaking out. Stop hiding from it, and stop using it as a weapon. Stop using it, period.”

She speaks in the Vanity Fair interview of healing her own hurt by helping other people through theirs—letting them see her survive and thrive through “extreme negativity” and responding by dancing harder. “Hell yeah, it made me feel better,” she said, describing seeing a girl dancing to her song after an avalanche of online abuse. “This is why I do what I do: this is my Grammy.” The interview describes her performing just as passionately for a handful of people as she would for a crowded hall. This is what we call “self-donation,” the kind that makes sense for the age we are in.

If you miss that Lizzo is a great satirist, you miss a large part of her genius. She is someone who understands our age thoroughly, and this is why she is able to skewer it so hilariously. One of her trademark backdrops is simply an enormous, inflated human derriere, wagging back and forth to the beat, and the first time I saw it, I laughed so hard, my own butt almost fell off.

This is how Lizzo operates. Her message is the Home Depot 12-foot-skeleton version of self love. We really haven’t the time for subtleties. There is so much noise, so much “extreme negativity,” the message has to be louder, larger, happier, stronger, dancier, more energetic, more more more in every way.

This is what got me about Lizzo. As a fat woman, I’m intrigued by rich and famous glamorous fat women and how they dress. So many of them dress so cleverly to make themselves look smaller. But Lizzo often makes herself look bigger than she actually is. Some of her outfits make her look like a fountain, like a volcano, like a force of nature, like a weather front. She is not only not apologizing for being the size she is; she is deliberately trying to take up even more space.

When you have thoroughly internalized the idea that you ought to be taking up less space than you do, Lizzo is the most beautiful thing you have ever seen.

When you have thoroughly internalized the idea that you ought to be taking up less space than you do, Lizzo is the most beautiful thing you have ever seen.

And she is not some slob. From what I’ve read about her, it is clear she takes such good care of herself. She’s a vegan; her daily workouts would turn most of us into a damp spot on the floor. She is constantly re-assessing her own habits and her own health, but it is clear that what she is looking for is wholeness. She is thinking hard about what the body is for, what can be done with it; what life is for, what can be done with it. I think she is getting it a heck of a lot closer to right than someone who dresses modestly (which Lizzo does not) but will not go on stage unless the paycheck and the audience are huge; or someone who promises to be faithful to one’s partner (which Lizzo does not) but who treats their spouse as if they are property to be used; or someone whose body is socially acceptable (which Lizzo’s is not) but who thinks nonstop about food and ascribes all kinds of moral weight to calories and pounds and weight gain and loss.

It is an indictment of the American public that so many people are furious at her for being fat and for setting a bad example by her body size, but they have not one word to say about rail thin performers who exist on cocaine and lemon water. Do people even realize it is possible to be fat and healthy, or thin and unhealthy? It really is.

So, you tell me. If Lizzo is getting it wrong, who is getting it right? Who is the right one to deliver a message of wholeness, kindness, self-donation and joy to the current generation? I’m not going to step out wearing one of Lizzo’s mesh dresses or her sparkly thongs. But my goodness, I will dance to her beat.