From 1962: America’s editors on the Cuban Missile Crisis 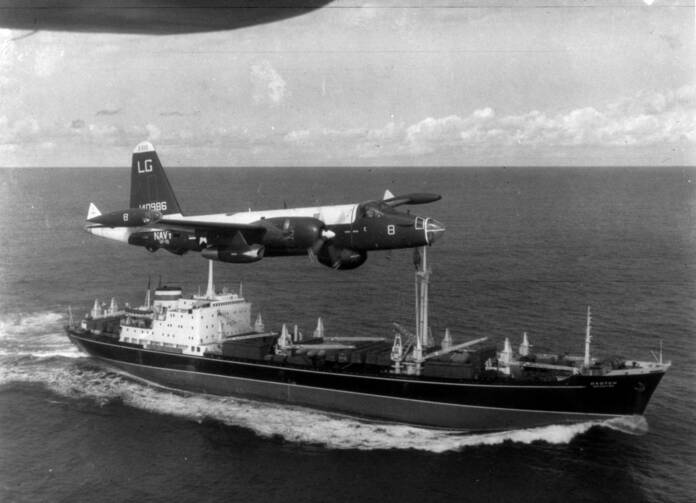 A US Navy P-2H Neptune of VP-18 flying over a Soviet cargo ship with crated Il-28s on deck during the Cuban Crisis. (Wikimedia Commons).

Editor’s note: This article first appeared in America on Nov. 16, 1962, headlined “After the Victory.”

At the late Masses on the Feast of Christ the King, the prayers of Catholics for peace, “with freedom and justice,” which the U. S. hierarchy had requested from Rome, carried overtones of joyous thanksgiving. For by that time it was widely known that Chairman Khrushchev had agreed to dismantle Soviet bases in Cuba and ship his missiles back to Russia. This gesture, subject to UN verification, seemingly removed the cause of the crisis which, for nearly a week, gripped the attention of the world.

We say “seemingly” removed the danger because the Kennedy Administration, fresh from its latest experience with Soviet duplicity, is taking no chances of another doublecross. As this is being written, the Navy and Air Force remain on the alert in the Caribbean. There will be, and should be, no relaxation of U. S. vigilance until the removal of the Soviet threat has been fully confirmed.

Although we are too close to the event for full evaluation of the U. S. response to the Soviet challenge, it is clear that in one respect, at least, the Cold War has taken a hopeful turn.

Although we are too close to the event for full evaluation of the U. S. response to the Soviet challenge, it is clear that in one respect, at least, the Cold War has taken a hopeful turn. If the men in the Kremlin, unlike the late Adolf Hitler, are coldly rational in their grab for world power, they are now aware that the policy of atomic blackmail has its limits. Like people everywhere, Americans blanch at the thought of a nuclear holocaust. Nevertheless, so firmly are they persuaded that there exist higher values than mere survival that there is a point beyond which they cannot be pushed. They would not rather be Red than dead, as Moscow suspected they might be.

We cannot be sure, of course, what it was that finally led Khrushchev, after several momentous days of blustering and face-saving indecision, to capitulate. But it could have been evidence, which grew as the crisis deepened, that the American people as a whole were standing solidly with their President, come what might. Except in the stock and commodity markets, which have their own special laws, there were remarkably few signs of panic. And if a tiny minority of Americans demonstrated against the quarantine of Cuba, an even larger minority felt that the President had not gone far enough. The Kremlin had good reason to conclude that, if it didn’t back down, it would have a real shooting war on its hands.

In this sense, the Cuban crisis, which may well have been provoked to test the mettle of our people, can be said to have been a turning point in the Cold War. From now on, there will be less chance than formerly that the Soviet Union will, through miscalculation, precipitate a nuclear war.

The danger from the expansionist drive of world communism remains, of course, as even the Indian government is now beginning to realize. (It’s good Leninist tactics to take a backward step today in order to move two steps forward tomorrow.) The Kremlin has lost a bold gamble; it has not been deflected from its goals. The Administration understands this, as its measured reaction to its brilliant diplomatic victory shows. But having successfully resorted to power once, the government will not be inclined to underestimate its future uses. The goal remains peace—but not peace at any price. The lesson, we trust, will not be lost on the so-called neutral nations in the UN.