If you had to pick just one day to pray the Rosary, let it be today 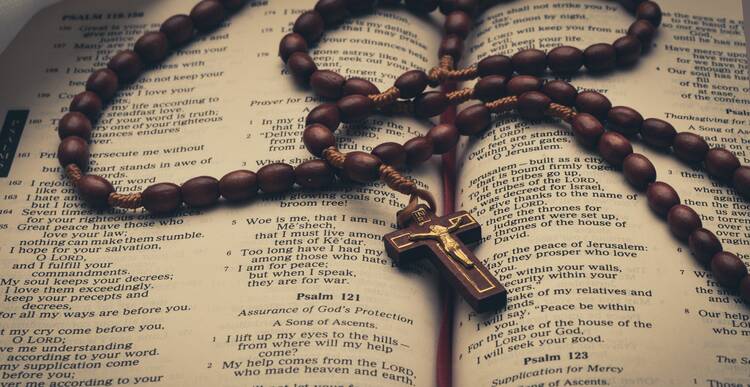 A Reflection for the Memorial of Our Lady of the Rosary

“But if it is by the finger of God that I drive out demons, then the Kingdom of God has come upon you. When a strong man fully armed guards his palace, his possessions are safe. But when one stronger than he attacks and overcomes him, he takes away the armor on which he relied and distributes the spoils.” (Lk 11:20-22)

I’ve always had a special love for Mary—maybe because she’s the mother of God, maybe because she was another female religious figurehead in my life, along with my own mother and nearly all of my religion teachers. Praying the Hail Mary often feels easier to me than the Our Father, some of my favorite hymns are Marian devotionals, and I love the month of May, partially because it is the month dedicated to her. But October is also the month of the Rosary, which happens to be today’s feast.

I could tell you the whole story of the European victory over the Turkish fleet at the Battle of Lepanto in 1571 (the original reason for today’s feast, once known as Our Lady of Victory), but you can read more about it if you are interested. Many at the time credited this win of Christianity over Islam to the intercession of Mary, as Pope Pius V had urged people to pray the Rosary on behalf of the Christian forces. This wasn’t the only time in history that the praying of the Rosary is said to have political impact—just think of Our Lady of Fatima asking the children to pray the Rosary for the conversion of Russia or Our Lady of Lourdes telling St. Bernadette to say the Rosary.

The sky’s not even the limit to the power Mary can yield through this deceptively simple prayer.

It’s easy to remember how connected Mary is to peace and harmony; after all, her sinless nature means she’s never acted on any ill will she felt. It can sometimes be hard to reconcile the Mary who avenges Christians and defends the world against sin with her own epithet as Queen of Peace. But really, doesn’t it only make sense that the woman who always does her Son’s will is also a fierce defender of the just?

In today’s Gospel, we hear of Jesus casting out demons—something that can be rather violent, compared to his healings or his food multiplication. Jesus makes a comparison to a strong man defending himself against an attacker, who then scatters his armor when someone even stronger comes along. The obvious stronger attacker is Jesus, but in many cases, including the reason for today’s feast, Mary is that someone stronger. Sure, she works on behalf of her Son (as she always does), but there is something extra-powerful about her in particular that has drawn people to her strength for centuries.

In a time when women were expected to be little more than housewives—this was a century after Joan of Arc lived and died—Mary is exceptionally powerful, even in the eyes of the mightiest men in Europe. Her prayer has withstood the test of time and continues to have an impact today.

If you had to pick just one day to pray the Rosary, try to do it today. The sky’s not even the limit to the power Mary can yield through this deceptively simple prayer.