Catholic, Muslim and Jewish schools in New York are lobbying ‘with one voice’ for STEM education funding 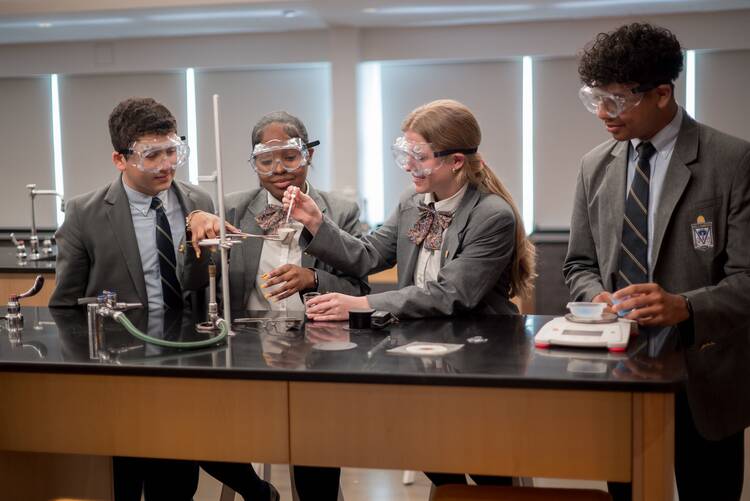 Catholic, Jewish and Muslim students, “singing out of the same hymn book.”

This is how Maury Litwack and Jim Rowen described their trip to Albany in 2017, when they and other advocates from the three faith traditions lobbied together for a program that would help fund science and math education in New York state’s religious schools.

“Every representative we met in Albany said this is the first time that they have met with Muslim, Jewish and Catholic schools with one voice,” Mr. Rowen said.

The New York program became a reality that year, earmarking $5 million for nonpublic schools to help pay salaries of qualified STEM teachers. Today, $58 million is available for the 2022-23 school year, marking the huge success and growth of the program in its fifth year.

“Every representative we met in Albany said this is the first time that they have met with Muslim, Jewish and Catholic schools with one voice.”

Over 260 different religious schools have received funding, according to the most recent state data provided by the nonprofit advocacy group Teach Coalition, which helped create the program.

Mr. Litwack, founder of Teach Coalition, said that the idea for the program came after lawmakers in Albany rejected a push for education vouchers that could be used at religious schools. Several of those lawmakers signaled their openness to other forms of financial support for nonpublic, religious schools. Mr. Litwack said he responded by polling religious schools from all around New York to identify their biggest needs.

“Parents… are struggling with the cost of tuition, and schools are struggling from wanting to increase the educational product but not burden parents with additional costs and increase tuition,” Mr. Litwack said. “When we met with schools, they identified the ability to attract and retain STEM teachers as a major problem.”

The importance of STEM education has become broadly accepted among U.S. educators. A majority of Americans see STEM jobs as higher paid and more attractive to the smartest young people, according to a Pew Research study. And the Bureau of Labor Statistics reports that the highest median salaries of any occupation are all in STEM, particularly medicine and engineering.

Mr. Litwack said that this perception helped convince legislators to fund STEM education even in nonpublic schools. “Politicians soon got around the idea of investing in STEM education because they viewed this as an investment in the state itself,” Mr. Litwack said. “This is not about theology. This is about supporting schools.”

Today, half of the applications for the program are filed by Catholic schools.

Mr. Litwack met Mr. Rowen, chief operating officer of Renaissance Technologies L.L.C. and a graduate of Fordham Preparatory School in the Bronx, and asked for his help looping Catholic schools into the advocacy effort. Mr. Rowen said that Catholic schools expressed enthusiastic interest, and when the funding was approved as part of the 2017-18 state budget, they jumped at the opportunity.

Today, half of the applications for the program are filed by Catholic schools. Mr. Rowen said that once word got out, even the archdiocese was surprised at how quickly Catholic schools started receiving grants.

“We were nimble, we were articulate, and we were focused. And that made a really big difference,” Mr. Rowen said.

Schools that apply for the program receive reimbursement for STEM outlays after paying their teachers. Funded STEM teachers must meet certain criteria: They have or are seeking graduate degrees, are state certified and do not teach any religious subjects. The state then informs the school how much of a salary reimbursement each teacher qualifies for.

“If I didn’t have those two teachers, it would be another burden for the science classroom teacher to have to do their lesson plans, set up the labs, instruct the labs and take down the lab,” Brother Hoagland said.

“A lot of our parents are taxi drivers, or they just don’t earn a lot of money. A lot of people lost their jobs due to Covid.”

He said that Kellenberg is also expanding its computer science program from just two grades to all grades.

Another grant recipient is the Islamic Cultural Center School in Manhattan, which serves 169 students in total, from pre-K to eight grade. It has a staff of 19 people.

Principal Khadijah Jean Pryce said that the school lost about a quarter of its students because of economic hardship heightened by the Covid-19 pandemic. She had to increase financial aid for the students that remain.

“A lot of our parents are taxi drivers, or they just don’t earn a lot of money. A lot of people lost their jobs due to Covid,” Dr. Pryce said.

She said that grants from New York state helped the I.C.C. School hold on to qualified teachers. She hopes that the reimbursement program continues to expand so that her school and others can continue their mission.

Mr. Rowen and Mr. Litwack believe that the STEM model can be used to persuade legislators to fund other secular resources at religious schools.

Mr. Litwack believes that the “investment” in students of New York religious schools will continue to pay dividends for the state and the students themselves. He said that programs like these will continue to serve the common interests of everyone involved.

“When you see the results … and you hear what the graduates are doing, there’s no one legislator who supported this bill who doesn’t say this was a massive investment in the state of New York,” he said.

@cparkernews
Provide feedback on this article
Join the conversation: Login or create an account
Before you can comment, you need to update your profile to include your first and last name, as required in our comments policy. Then reload this page and you'll be set up for commenting. Update your profile
Show Comments ()
Login to comment.