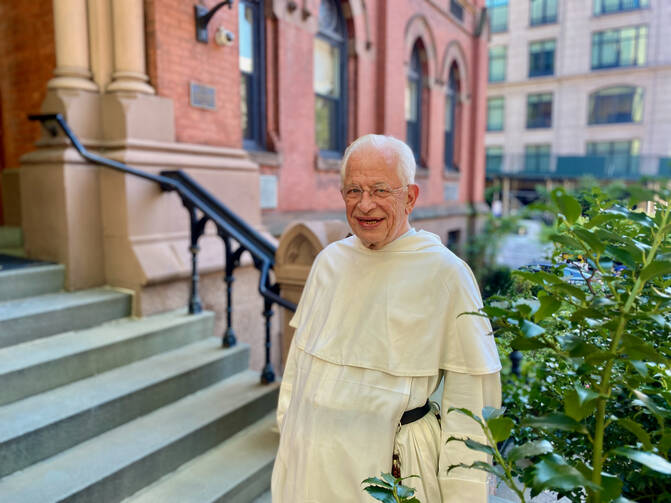 On Oct. 5, the Rev. William Holt, an 80-year-old Dominican priest, went viral on social media. He was photographed for the popular Facebook page, Humans of New York, where he shared a story of an inspiring encounter with a young girl with leukemia. On Oct. 6, I met him at the Church of St.Vincent Ferrer, on the Upper East Side of Manhattan, to learn a little more about his life and journey to the priesthood and his secrets to living a fulfilling and happy life. Our conversation has been edited for style, length and clarity.

Tell me about “Humans of New York.” How did you get involved with them?

I was walking down Park Avenue and he stopped me, Brandon Stanton [the creator of the “Humans of New York” project], and he said, “Can I ask you something?” And I said, “Sure.” And he said, “I have met many unhappy priests.”

Are you still ministering in the parish here at St. Vincent Ferrer?

I help out; I say Mass publicly. I’m the main celebrant twice a week and I hear confessions three times a week. And then I see some people. I stand on the porch and smoke and I meet the world, right? But I’ve met, and I’ve had, some very interesting conversations.

I stand on the porch and smoke and I meet the world, right?

And you have a Jesuit background?

So you were in the parish at St. Peter’s?

Yes. It was the center of our lives, you know, the gym and the schoolyard. And the priests there were all very friendly. And my first Mass was at St. Peter’s and Joseph Taylor, S.J., preached. He was there for 42 years.

So you entered the Dominicans and your first Mass was in a Jesuit parish?

Yep. That’s where we all grew up.

You say in the short piece that was published by “Humans of New York” that you only want to be around happy people: [“But I want to hang out with people who enjoy life.”] What do you mean by that?

I mean people that really have a positive outlook on life, who really understand the resurrection of Christ that said: peace, wholeness.

And I really think that if people understand who they are and why they are here, they have a much better frame of mind. When people feel they are the only ones in the world, it’s tragic, really tragic. Or people who are very, very self-centered or materialistic.

When people feel they are the only ones in the world, it’s tragic, really tragic.

And yet as a priest, you’re probably not around happy people all the time. Right?

No. You’re in the confessional and you hear it.

What have been your ministries as a Dominican?

Mainly parishes. I was in fundraising; I hated it. I really hate to raise money. But I did it—three and a half years.

And I was a missionary in Peru. I ran a retreat house and I was the procurator for the community. We had a big retreat house, and Cursillos were the big thing.

So what do you want to say to people about living a happy life?

Well, I think that they really should understand why God made them and who Christ is for them. You know, ‘How is your soul?’ Not a bad question.

And I often suggest, you know, [your parish priest] is your priest, if you feel connected with him ask to see him, and let him pick your brain. Let him find out what makes you tick. And then you can have an ongoing conversation.

I think that they really should understand why God made them and who Christ is for them. You know, ‘How is your soul?’ Not a bad question.

What made you want to become a priest?

I think the priests that were at St. Peter’s really were dedicated wonderful men, really and truly happy men—every one. I could name them, and they were very good to us.

So the Jesuits made you want to be a priest? And then you joined the Dominicans? Why?

Well, because I was with them at Dominican [summer] camp.

I think I was impressed to see [the Dominicans] had meditation and Mass—I was always impressed with the meditation. The priests would be in the choir stalls just looking at the tabernacle, focused on Jesus. That’s all. I really think it’s so important.

So who is Jesus for you?

How would you encourage young people to find Jesus?

I always tell them to make a retreat. I always send them to [St. Joseph’s Abbey, the Trappist monastery in] Spencer, Mass. I think you need a thunder of silence.

Have you ever heard of the Nashville Dominican Sisters? It’s a community of Dominican sisters in Nashville, Tenn.—St Cecilia. At 5:30 in the morning, 150 [sisters] looking at the tabernacle, not a bead rattling, not a cough, not a page turning. And then they start the Office and then Mass. The ones that are home, infirm or ancient, they make a holy hour in the morning, exposition all morning, and they have prayers at noon and then evenings. And a lot of silence. Wonderful work. I’ve given two retreats there; more than that, but two big ones, and I love them.

What advice would you give to young people who want to be happy?

I think that they should have a great relationship with their siblings, parents and classmates. But they really have to have their own identity. They really have to understand who they are and their gifts. I always ask kids: “Tell me three great things about you.”

How do they do that?

I want them to write it down. You have to really think about this. No, this isn’t some TV program. And I really think that they have to experience silence.

What do we learn in the silence?

I think you really learn to listen to God.

My favorite is the story about the prodigal son, because I think that that’s what happens to a lot of people. A lot of people get alienated from their parents over money.

The father in the story, like God, is always running after us and there’s mercy there. I love the stories of people coming home; I love convert stories. I love them. I always ask people: “Why do you want to become a Catholic?” The best answer I’ve ever heard: “I hunger for the Eucharist.”

What do you want people to know about faith today?

What has silence taught you over the years?

Silence taught me to listen.

I think that people really should know how blessed they are by God, and all the gifts that he’s given them. They should be aware of that. And I think that the real essence of understanding God’s love is all that: people’s intellect, their imagination, their energy, their enthusiasm... but their real love for one another, I think that really shows—it really does. You see it in families a lot; you know, people that really care for one another; especially when, say, the mother gets Alzheimer’s and the kids care for her at home. It’s very difficult to do, very difficult. But when you care for them at home, it really tells. I really think it does.

This really is my very last question. Who was the happiest person you’ve ever met?

James Murphy, O.P., one of our brothers in Somerset, Ohio. High energy; but he was in the chapel before anybody else, in the chapel after everybody else—really a prayerful man.