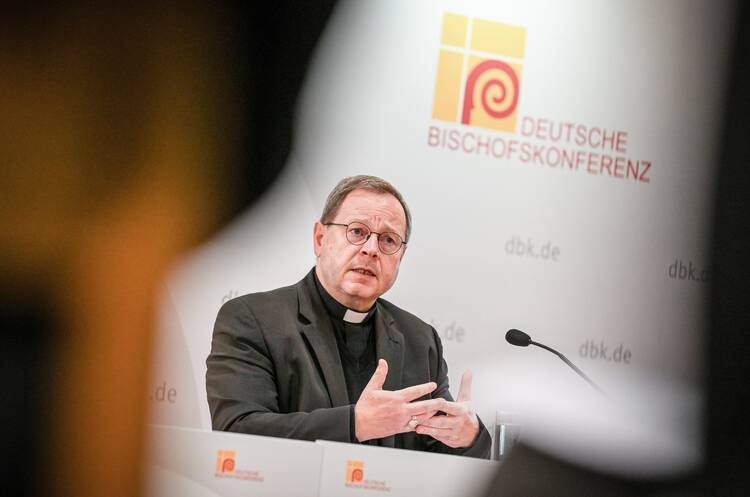 Bishop Georg Bätzing, president of the German bishops' conference, speaks during a new conference at the end of the bishops' fall assembly in Fulda Sept. 29, 2022. (CNS photo/Harald Oppitz, KNA)

This story has been updated here.

FULDA, Germany (CNS)—The president of the German bishops’ conference demanded an apology from a Swiss cardinal at the Vatican over comments that brought up Germany’s Nazi past.

Bishop Georg Bätzing, president of the German bishops’ conference, demanded an apology from Cardinal Kurt Koch, prefect of the Dicastery for Promoting Christian Unity, who seemed to compare what is underlying the German bishops’ Synodal Path process with a mistaken Christian ideology that underpinned the rise of Nazism.

Cardinal Koch said he has been misunderstood.

At the end of the German bishops’ plenary assembly Sept. 29, Bishop Bätzing said that, with his remarks, Cardinal Koch had “disqualified himself from the theological debate” about the Synodal Path.

Cardinal Koch: “I simply assumed that we can still learn from history today, even from a very difficult period.”

“If a public apology does not happen immediately, I will file an official complaint with the Holy Father,” Bishop Bätzing said.

That evening, Cardinal Koch published a statement rejecting the accusations. He said he had in no way compared the Synodal Path reform project with Nazi ideology, “and I will never do so.”

Koch went on to emphasize that he had not wanted to hurt anyone: “I simply assumed that we can still learn from history today, even from a very difficult period. As the vehement reaction of Bishop Bätzing and others show, I have to realize in retrospect that I failed in this attempt. And I also have to realize that memories of phenomena in the National Socialist period are obviously taboo in Germany.”

The following day, Bishop Bätzing intensified his criticism. He said he could not accept the cardinal’s response “since Cardinal Koch, in essence, does not apologize for the indefensible statements, but—on the contrary—aggravates them.” He said he still expects a “clear dissociation from these statements.”

Bishop Bätzing: “If a public apology does not happen immediately, I will file an official complaint with the Holy Father.”

Bishop Bätzing said the cardinal must have “consciously chosen” the comparison to the Nazi era, thus placing the participants of the Synodal Path “in the horizon of the regime that brought unimaginable suffering, especially to the Jewish people.”

In his interview with the conservative weekly newspaper Die Tagespost, Cardinal Koch referred to an orientation text decided on during the Synodal Path. In addition to the Bible, tradition, the magisterium and theology, the text also mentions the “signs of the times” and the “sense of faith of the people of God” as the most important sources of revelation for Christian.

“It irritates me that new sources are being accepted alongside Scripture and tradition as sources of revelation; and it frightens me that this is happening—again—in Germany,” Cardinal Koch told Die Tagespost. “That is because this phenomenon already existed during the National Socialist dictatorship, when the so-called ‘German Christians’ saw God’s new revelation in blood and soil and in the rise of Hitler.”

Cardinal Koch said that he had “in no way compared the Synodal Path with the mentality of the German Christians, nor did I intend to do so.”

The German Christians were a movement in German Protestantism that wanted to align the Protestant Church with Nazi ideology and transform it along National Socialist lines in the period from 1932 to 1945. Its members embraced racist and anti-Semitic ideology.

In his statement the evening of Sept. 29, Cardinal Koch added that he had “in no way compared the Synodal Path with the mentality of the German Christians, nor did I intend to do so.” He had in mind only those Christians who, invoking the spirit of the times, wanted to change the teachings of the church: “I hope I can continue to assume that this assertion is not the opinion of the Synodal Path.”

In his Die Tagespost interview, the cardinal said the Christian faith must always be interpreted in a way that is true to its origins and at the same time contemporary. The church is therefore obliged to take the signs of the times seriously, he said, “but they aren’t new sources of revelation. I miss this necessary distinction in the orientation text of the Synodal Path.”

Theologian Thomas Söding, a member of the Synodal Path’s executive committee, said, Cardinal Koch did not differentiate enough between German Christians and the Synodal Path.

“I refuse to be lumped together with the German Christians,” Söding said.

The German bishops’ conference and the Central Committee of German Catholics launched the Synodal Path in 2019 in the wake of Germany’s clerical abuse scandal. The process includes forums in which questions are discussed and assemblies at which people from the forums report back and proposals are discussed and voted on. Some texts not only must receive approval of more than two-thirds of all delegates, clerical and lay, but also must have the approval of more than two-thirds of the bishops.