Archbishop Lori: Post-Roe, Catholics must help build a world that welcomes all 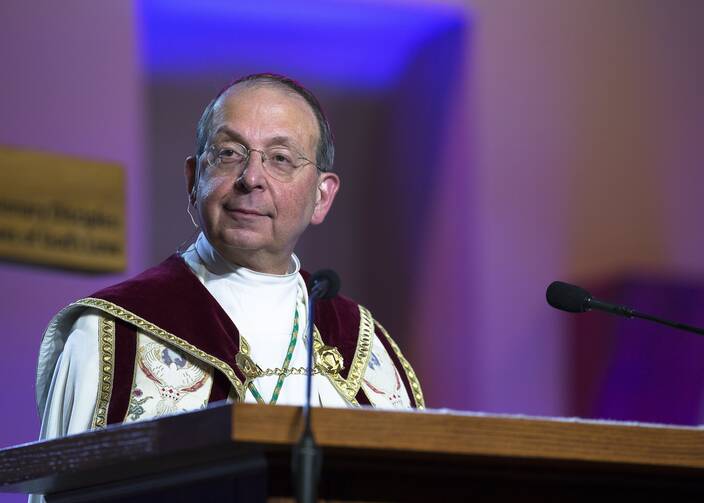 WASHINGTON (CNS)—The U.S. Supreme Court’s reversal of Roe v. Wade “is, without question, an answer to prayer,” but in a post-Roe world, “Catholics must now work together for another, even deeper paradigm shift,” said the U.S. bishops’ pro-life chairman.

“We must move beyond a paradigm shift in the law in order to help the people of our nation better see who we can be as a nation by truly understanding what we owe to one another as members of the same human family,” said Baltimore Archbishop William E. Lori, chairman of the U.S. Conference of Catholic Bishops’ Committee on Pro-life Activities.

“To build a world in which all are welcome,” he said, Catholics “must heed” the words of St. Teresa of Kolkata “and remember ‘that we belong to one another.’”

“We must shift the paradigm to what St. John Paul II described as ‘radical solidarity,’ making the good of others our own good, including especially mothers, babies—born and preborn—and families throughout the entire human lifespan.”

“We must shift the paradigm to what St. John Paul II described as ‘radical solidarity,’ making the good of others our own good, including especially mothers, babies—born and preborn—and families throughout the entire human lifespan,” Archbishop Lori said.

He made the remarks in a Sept. 21 statement for the U.S. Catholic Church’s observance of Respect Life Month, which is October. The theme of the observance is “Called to Serve Moms in Need.”

The first Sunday of October is designated as Respect Life Sunday, which is Oct. 2 this year.

In their June 24 ruling in Dobbs v. Jackson Women’s Health Organization, a majority of the justices ended the court’s nearly 50-year nationwide “regime of abortion on demand,” the archbishop said.

“Catholics must now work together for another, even deeper paradigm shift.”

This “regime” was “based on the indefensible view that the U.S. Constitution implicitly forbids government from protecting the preborn child in the womb from the violence of abortion,” he said.

The court “concluded that there is nothing in the Constitution’s text, history, American legal tradition or the court’s precedents that justified the extreme holding of Roe,” he said.

Dobbs was a challenge to a Mississippi law banning abortion after 15 weeks. The court affirmed the law 6-3 and also voted 5-4 to overturn the 1973 Roe ruling, which legalized abortion nationwide, and 1992’s Casey v. Planned Parenthood ruling, which affirmed Roe.

The ruling returned the issue of abortion to the states.

“To build a world in which all are welcome requires not only justice, but compassion, healing, and above all, unconditional love.”

With Dobbs, the high court “cleared the way for a paradigm shift in American law, allowing it to enlarge its boundaries to again welcome a segment of the human family that had been outside of its protections for close to half a century,” he added.

He called Dobbs “a victory for justice, the rule of law and self-governance.”

“But for those of us who have prayed for this moment to arrive, it is the time for a renewal and rededication of our efforts to build a culture of life and civilization of love,” he said. “Justice is, of course, essential to this end. But it is not sufficient.

“To build a world in which all are welcome requires not only justice, but compassion, healing, and above all, unconditional love.”

“Abortion is a gruesome sign of how we have forgotten our mutual belonging,” Archbishop Lori continued. “The logic of Roe v. Wade has framed our national discourse on the issue of abortion as a zero-sum conflict among individual strangers.”

“The new life that is developing under the heart of the mother is already situated in a network of relations, including family, neighbors and fellow citizens.”

But “mother and child are not strangers; they are already bound together by flesh and kinship,” he said. “The new life that is developing under the heart of the mother is already situated in a network of relations, including family, neighbors and fellow citizens.”

Roe’s logic “offers the woman only the right to see lethal force used against her child, but it otherwise abandons her,” he explained.

But “the logic of the culture of life recognizes that the pregnant woman and her child are not alone—they are fellow members of our larger human family whose interwoven vulnerability is a summons to all of us, but especially Catholics because of the teaching of Jesus and his proclamation of the Gospel of life,” the archbishop said.

“Millions of individual Catholics from all walks of life are already personally endeavoring to build the bonds of solidarity and compassion throughout our society.”

To practice “radical solidarity and unconditional love in a post-Roe world,” he said, means speaking and living the truth” with compassion—the truth that abortion not only “unjustly kills a preborn child, but also gravely wounds women, men, families and the nation as a whole.”

Through law, policy, politics and culture, society must do whatever it can to provide mothers, children and families in need “with the care and support necessary for their flourishing throughout the entire arc of life’s journey,” he said.

“Building a world in which women are esteemed, children are loved and protected, and men are called to their responsibilities as fathers, requires us to understand and address the complex and tragic tangle of affliction and strife that culminates in the violence of abortion,” Archbishop Lori said. “This is a massive and daunting undertaking.”

“Catholics already have a strong foundation in the church’s centuries-long encouragement of parental and societal duties,” he said. “Millions of individual Catholics from all walks of life are already personally endeavoring to build the bonds of solidarity and compassion throughout our society.”

Many also are engaged in parish and community initiatives such as pregnancy resource centers, post-abortion counseling, he said, as well as Walking with Moms in Need, an initiative of the U.S. bishops to connect pregnant women and their families with parishes and to a growing network of resources.