When Detroit’s Catholic schools started moving to the suburbs, one Jesuit high school stayed. It’s made all the difference. 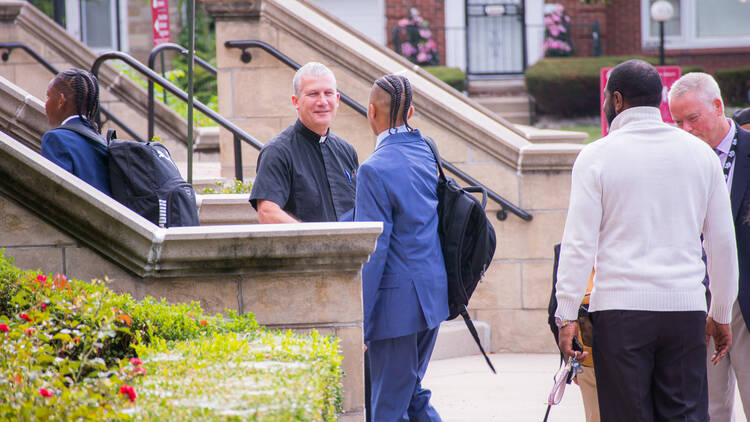 Brother Jim Boynton greets an incoming freshman at University of Detroit High School and Academy (photo: U. of D. Jesuit).

Brother James J. Boynton, S.J., was named the 30th president of University of Detroit Jesuit High School and Academy in July after serving as interim president for seven months. He is one of the first Jesuit brothers to serve as president of a Jesuit secondary school. He has worked in a variety of roles at the school, including as teacher, department chair, advancement officer and principal. I spoke to Brother Boynton about what it means to run one of the few Catholic high schools in the city of Detroit and how being a Jesuit brother shapes his leadership style. This interview has been edited for length and clarity.

M.T.R.: U. of D. Jesuit was founded in 1877. How has the school changed over time? Has it changed along with the city?

J.B: How has the school changed with the city? I would actually like to flip that question on its head and make the point that we haven’t changed.

There were once over 30 Catholic high schools in the city of Detroit. But after the Detroit riots in 1967, and slowly following it, all of those schools closed. U. of D. Jesuit is the only school of the original schools before the riots that is still in the city. All the rest went to the suburbs. And so, we made a conscious commitment, a strategic decision to stay in the city of Detroit and to be committed to the city. Had we moved outside the city to the suburbs, we’d probably be three times the size we are right now and wouldn’t look anything like we look right now.

There were once over 30 Catholic high schools in the city of Detroit. There are now three.

That decision to stay has really formed the identity of the school in a big way in the last 50 years.

That’s correct. It forms who we are, our identity of being Jesuit Catholic. Being in the city of Detroit and the diversity that comes with that, not only our student body, but our faculty and staff—that is a huge part of who we are. We are racially and economically diverse, and that’s a big part of our strength. And [our student body] is now over a third African American and other minorities.

What are some of the biggest challenges you’re facing as you begin your tenure?

This year, we’re back in the classroom 100 percent. I don’t want to be naïve and say that Covid is behind us, but our response to Covid has grown and changed and developed, and we’re able to more or less live normal lives now. I’m not sure that anyone realized the psychological effect that Covid would have on not only students, but also faculty and staff, and that’s still there.

What are some of the most exciting things happening right now?

Under the vision of our last president, Ted Munz, S.J., we purchased a recreation center that was abandoned for 15 years just north of the school. It gives us another means to be committed to the city of Detroit and to interact with our neighbors and partner with the community. This community center, which was closed, is now open and available to the members of the community, not just to our students.

Being a brother in the Society of Jesus, in a way it’s the road less traveled, but it’s a really cool road.

Could you speak a little bit about how you decided to be a brother?

I joined the Jesuits at age 20. And then it was during the 30-day long retreat, the silent retreat, that I clearly saw Jesus as my brother. And that’s how I want to relate to other people in the world, with the people that I minister with, that I live with, my family, friends and community.

To this day, that’s how I see myself relating to people. And I love it. Being a brother in the Society of Jesus, in a way it’s the road less traveled, but it’s a really cool road.

How will your identity as a Jesuit brother inform your role as a leader of the school?

Well, a priest is in front of the people, preaches, does the sacraments and ministry. A priest acts, according to the Latin term, as an alter Christus, in the place of Jesus Christ. And I think that’s wonderful and I love that.

I want to be Jim Boynton. I want to be me. It allows me to fully be me and to lead from within. We have a leadership team here of eight people. And I know that I’m the president, and I know that they all report to me; but we sit around the table. I don’t sit at the head of the table. I don’t always lead the meeting. I don’t always open it up with a prayer. Other people do that.

You were recently part of a group of Jesuit brothers who met with Pope Francis. What was that like?

We talked about all the issues you talk about with young people today, whatever the issue might be, anything from Covid to mental health, to sexual identity, to you name it. The Holy Father said when he was a soccer coach, he said, he always told the kids, “Follow the ball or lose. Know where the soccer ball is going and go there.” So, be there at the important junctures of these kids’ lives and help them, help them to kick that ball.

He also said, “Beg for joy in your prayer.” And he said, “If you do that, you can have consolation even if everything’s not perfect and everything’s not right.” And I thought those were good words of advice. Not to have fear in the future. Go forward even if you don’t know where you’re going. But go forward.