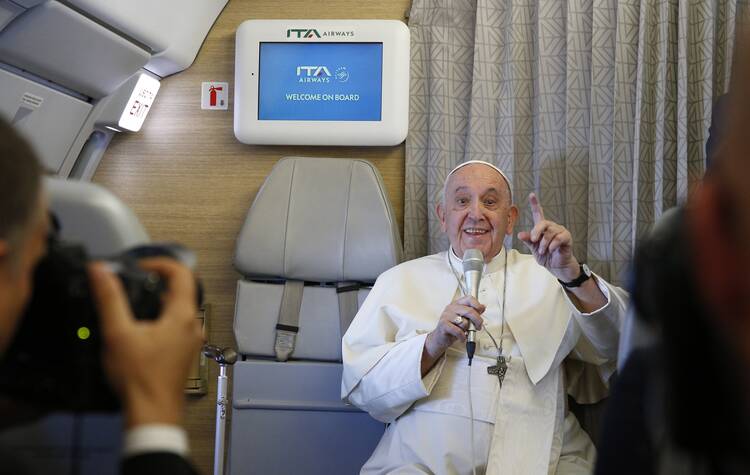 Pope Francis gestures as he answers questions from journalists aboard his flight from Nur-Sultan, Kazakhstan, to Rome Sept. 15, 2022. (CNS photo/Paul Haring)

ABOARD THE PAPAL FLIGHT FROM KAZAKHSTAN (CNS)—Under the right moral conditions, a country has the right to purchase weapons to defend itself from those who attack it, Pope Francis said.

Speaking to journalists Sept. 15 after his three-day trip to Kazakhstan, the pope responded to a question regarding the sale of weapons to Ukraine, saying that it can be “morally acceptable if done under the conditions of morality.”

However, “it can be immoral if done with intentions of making more war or of selling weapons,” the pope said.

In what has become a tradition for the papal flight after a visit to another country, Pope Francis answered a variety of questions. He touched on dialogue with warring countries, religious freedom in places like China and Nicaragua and the possibility of future travels abroad.

“To defend oneself is not only licit, it’s also an expression of love toward one’s homeland; whoever doesn’t defend something, doesn’t love it. Instead, those who defend, love.”

Speaking of the purchase of weapons, the pope said: “The motivation is what in a great part qualifies the morality of that act. To defend oneself is not only licit, it’s also an expression of love toward one’s homeland; whoever doesn’t defend something, doesn’t love it. Instead, those who defend, love.”

He also said it was important to reflect “now more than ever on the concept of just war.” While everyone “speaks of peace today,” there are still “so many wars happening.”

Although recent flare-ups in tensions between Azerbaijan and Armenia were halted due to Russian intervention, he noted that Russia became “a guarantor of peace here yet is making war there” in Ukraine.

While dialogue with an aggressor is difficult, it was important to give everyone an opportunity to dialogue “because there is always the possibility that things may change through dialogue.”

When asked whether there was a limit to engaging in dialogue with Russia if it continues to persist in its attacks, the pope said it’s always “difficult to understand the dialogue with states that have started war.”

He said that while dialogue with an aggressor is difficult, it was important to give everyone an opportunity to dialogue “because there is always the possibility that things may change through dialogue.”

“I don’t exclude dialogue with any sort of power that is at war, even if it is with the aggressor,” the pope said. “It may smell, but one has to do it.”

Pope Francis also addressed questions regarding religious freedom, which was among several issues he highlighted in his Sept. 14 address to the Congress of Leaders of World and Traditional Religions.

Nevertheless, the pope said he preferred “to choose the path of dialogue.”

Journalists asked the pope his thoughts on religious freedom in China, as well as the upcoming trial of Cardinal Joseph Zen Ze-kiun who, along with four others, was charged with failing to properly register a now-defunct fund to help anti-government protesters.

A longtime critic of the Chinese government, Cardinal Zen also drew Beijing’s ire for his continued critique of the Vatican’s controversial 2018 deal with China regarding the appointment of bishops.

“It is not easy to understand the Chinese mentality, but it must be respected,” the pope said. “It is true there are things that for us seem undemocratic. Cardinal Zen is an elderly man who will go to trial in these days. He says what he feels; and we see that there are limitations (in Hong Kong).”

Nevertheless, the pope said he preferred “to choose the path of dialogue.”

He also spoke about concerns over religious persecution in Nicaragua, including the arrest of outspoken Bishop Rolando Álvarez of Matagalpa.

“These women [Missionaries of Charity] are brave revolutionaries, but of the Gospel. They don’t make war on anyone.”

The government of Nicaraguan President Daniel Ortega—who has treated the Catholic Church as a political enemy—also has arrested priests, expelled the Missionaries of Charity and the apostolic nuncio and closed Catholic media outlets as well as educational and charitable projects.

Pope Francis said there is a “dialogue, but that doesn’t mean that we approve everything the government does.”

He also expressed his hope that the Missionaries of Charity would be allowed to return to Nicaragua.

“These women are brave revolutionaries, but of the Gospel. They don’t make war on anyone,” he said. Their expulsion “is a gesture that can’t be understood, but we hope they can return and resolve (the situation). But we continue with dialogue. Never, never stop dialogue.”

While his knee problems have made traveling “difficult,” the pope confirmed that he recently spoke with Anglican Archbishop Justin Welby of Canterbury, England, and “we saw a possibility” of visiting South Sudan and Congo in February.

In July, due to his continuing health concerns, Pope Francis was forced to postpone his visit to the African countries. He had hoped to go with Archbishop Welby and the Rev. Iain Greenshields, moderator of the (Presbyterian) Church of Scotland.

Matteo Bruni, Vatican spokesman, also confirmed that a possible visit to Bahrain in November is currently being studied.