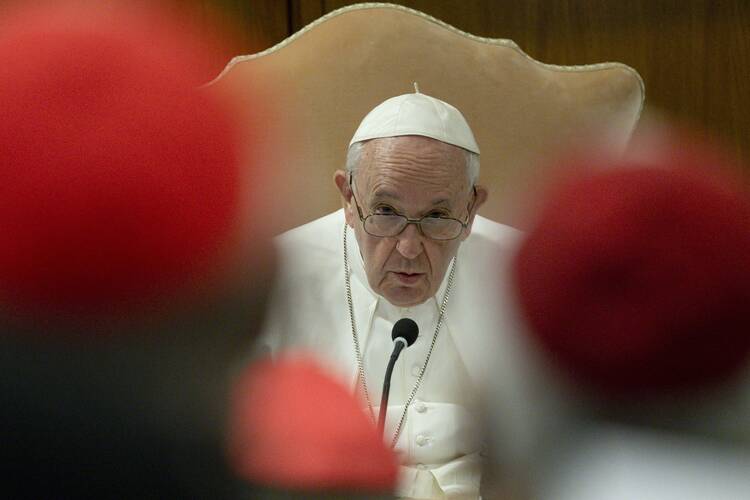 Pope Francis meets with cardinals at the Vatican Aug. 29, 2022. The meeting was to reflect on the apostolic constitution "Praedicate evangelium" (Preach the Gospel) on the reform of the Roman Curia. (CNS photo/Vatican Media)

Pope Francis opened a two-day meeting of almost 200 cardinals this morning, Aug. 29, to discuss “Predicate Evangelium,” the constitution for the reform of the Roman Curia that he promulgated on March 19 and which came into force on June 5.

The last time the College of Cardinals came together for a meeting to discuss a major topic was in 2014 to discuss the family ahead of the Synod of Bishops on the Family in October of that year. This meeting is not only as an opportunity to discuss the new constitution, which will impact their dioceses, but also to get to know each other. A great many cardinals do not know their brother cardinals, and it is important that they have an opportunity to become acquainted well in advance of a future conclave. A conclave is not yet on the horizon as the pope has not given any indication that he intends to resign.

Several cardinals, who wished to remain anonymous, told America that Pope Francis recalled in his brief introduction for the meeting that the reform of the curia had been called for by the cardinals in the pre-conclave meetings in March 2013. He said he had appointed a council of cardinals to advise him on this and other tasks. He emphasized that a new approach was required of the Roman Curia and that it should be a body at the service of the Petrine office and the bishops of the world, with evangelization as its priority. He recalled that since 2013, wide consultation had been carried out at various stages, resulting in the final text.

Pope Francis opened a two-day meeting of almost 200 cardinals this morning, Aug. 29, to discuss “Predicate Evangelium,” the constitution for the reform of the Roman Curia.

He encouraged the cardinals “to speak freely” as they discussed the text in two sessions today and in a session on Tuesday morning. He made clear that he wanted them to discuss the Holy Year 2025 in the final session on Tuesday afternoon, before the Mass that he will celebrate with the 20 new cardinals at 5:30 p.m. that evening.

The cardinals, who had received a copy of the constitution and a series of questions to guide their discussion, then broke into language groups ranging from about 10 to 15 in each group. English appears to be the most-spoken language among the cardinals, and there are four English-language groups. The other languages spoken are Spanish, French and Italian.

The first session was dedicated to discussing the introduction to the constitution. “There was a synodal climate,” according to Cardinal Juan José Omella y Omella, the archbishop of Barcelona, quoted by SIR, the agency of the Italian bishops’ conference. He said the main themes to emerge so far are “evangelization” and “how all the baptized are called to be evangelizers” and that they should do so through “acts of charity, closeness, tenderness, and especially by listening.”

Spanish and Italian media report that some cardinals who do not fully agree with the constitution intend to raise questions at the meeting regarding the separation of the power of governance from that of holy orders (by, for example, allowing lay people to hold top positions of the Roman Curia) and the emphasis on being a synodal rather than on a hierarchical church. But sources told America that there seems to be strong support for the emphasis on being a missionary church that reaches out to people.

These are but the early indications of what is happening at this first major gathering of cardinals since 2014, an event that has given rise to all kinds of speculation, even to rumors that the pope would announce his resignation, a rumor that lacks foundation according to several cardinals who spoke to America.