The U.S. Southwest should have a vote for the next pope. That’s why I want Cardinal McElroy to stay in San Diego. 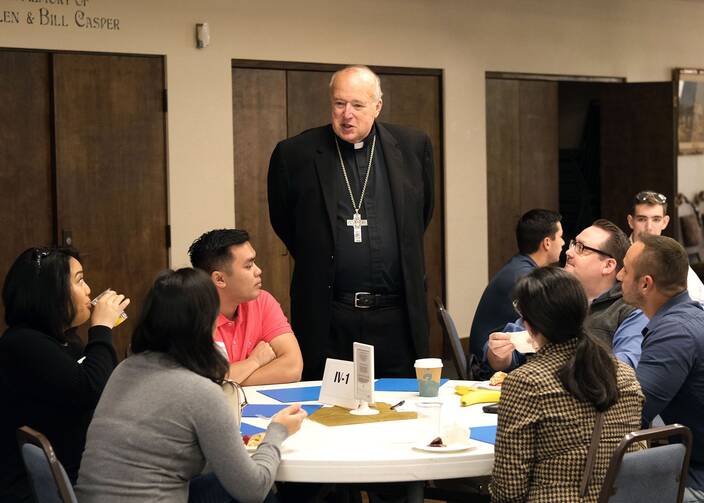 On Aug. 27, Pope Francis will create 20 new cardinals, including the current bishop of San Diego, Robert W. McElroy. Cardinal-designate McElroy would be among the cardinals who vote for the next pope—assuming that happens before 2034, when he turns 80.

I have heard plenty of speculation of where the Vatican will move Bishop McElroy after he becomes a cardinal—Washington, D.C., Boston, even Rome. Personally, I prefer that he stays in San Diego. In a sense, he would be representing the southwestern United States in the next papal conclave, and someone from our region of the country should get a vote.

The geographical center of U.S. Catholicism has shifted away from the East. It is unlikely to shift back any time soon.

The reason is simple. The church is growing fastest in the southern and western regions of the United States. Those two regions are where the majority of U.S. Catholics live today, in large part due to the growing Latino community. In fact, more than 60 percent of Catholics in the Diocese of San Diego are Hispanic, by far the fastest growing ethnic group in the diocese.

The geographical center of U.S. Catholicism has shifted away from the East, and since Catholics in the South and West tend to be younger than Catholics in the Northeast and Midwest, it is unlikely to shift back any time soon. The Diocese of San Diego represents the future of the U.S. Catholic Church, and it is appropriate that it is led by an energetic cardinal who has Pope Francis’ confidence.

The Diocese of San Diego represents the future of the U.S. Catholic Church, and it is appropriate that it is led by an energetic cardinal who has Pope Francis’ confidence.

I can’t say that I know Cardinal-designate McElroy well, other than from his speeches and writings. But my friends and colleagues describe him as a deeply pastoral bishop. I briefly met him in 2017 while reporting on a conference of the World Meeting of Popular Movements in Modesto, Calif. The San Francisco native is pretty tall and smiles a lot. During his address, he had the gathering of 700 members of grassroots organizations shouting, standing and clapping in approval. There were many quotable parts of that speech, but the following perhaps grabbed the most attention:

President Trump was the candidate of “disruption.” He was “the disruptor,” he said, challenging the operations of our government and society that need reform. Well now, we must all become disruptors.

The disruption he spoke of, to be clear, was consonant with Francis’ image of the church as a field hospital. “We must disrupt those who would seek to send troops into our streets to deported the undocumented, to rip mothers and fathers from their families,” Bishop McElroy said in the same speech. He also said that as “disruptors” we must not portray refugees as enemies and that we must recognize Muslims as children of God. Further, we cannot allow medical care or food stamps to be taken away from the poor.

But people of faith must not simply be disruptors, he said. They must also be rebuilders:

We have to rebuild this nation so that we place at its heart the service to the dignity of the human person and assert what the American flag behind us asserts is our heritage: Every man, woman and child is equal in this nation and called to be equal.

It is clear that in making Bishop McElroy a cardinal, the pope has elevated a voice very much in harmony with his own. And while it is hard to argue that relatively prosperous San Diego is a diocese on the periphery, Bishop McElroy has unquestionably kept his focus on the margins.

It is also important that Bishop McElroy has embraced Francis’ calls to synodality. His support of the synodal approach puts him in touch with the burgeoning Latino community in San Diego—many of whom, studies show, are leaving religious practice. Nationally, he is a stalwart voice in our Catholic conversations, contributing guiding insights as the church re-examines its role during a tumultuous time in the United States.

Not taking anything away from his national leadership, but I am still glad he is (relatively speaking) from my neck of the woods. So I hope Francis allows him to continue his ministry in his home state. I would take it as a sign that the Vatican recognizes where the U.S. church is growing the fastest.