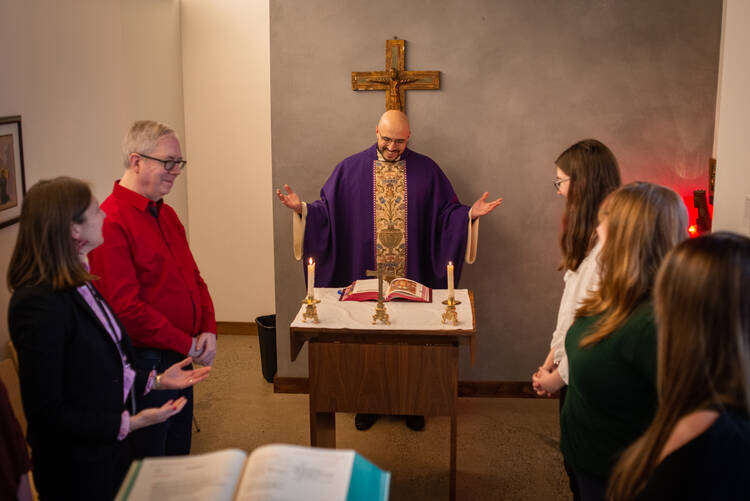 Members of America’s staff at Mass in the office chapel (photo: Keara Hanlon)

The following editorial announcement was published in America’s inaugural issue on April 17, 1909. From the start, the editors were adamant that the goal was not to cover simply church affairs or religious topics: America was to be “cosmopolitan not only in contents but also in spirit,” a journal of general interest to all Americans despite its specific Jesuit charism and Catholic foundation. More than a century later, any survey of America’s content shows that the original mission remains relevant for our staff and readers alike. Telegraph and cable are no longer used, but neither labor nor expense are spared to “make America worthy of its name.”

The object, scope and character of this review are sufficiently indicated in its name, and they are further exhibited in the contents of this first number.​

AMERICA will take the place of the monthly periodical, The Messenger, and continue its mission. It is in reality an adaptation of its precursor to meet the needs of the time. Among these needs are a review and conscientious criticism of the life and literature of the day, a discussion of actual questions and a study of vital problems from the Christian standpoint, a record of religious progress, a defense of sound doctrine, an authoritative statement of the position of the Church in the thought and activity of modern life, a removal of traditional prejudice, a refutation of erroneous news, and a correction of misstatements about beliefs and practices which millions hold dearer than life. These needs, moreover, are too numerous, too frequent and too urgent to be satisfied by a monthly periodical, no matter how vigilant or comprehensive it may be.

‘America’ has always sought to be journal of general interest to all Americans despite its specific Jesuit charism.

The march of events is too rapid, and every week has its paramount interests which are lost or forgotten, unless dealt with as soon as they arise. In the opinion of many, a daily organ would be required to treat these interests adequately. Until such time as a daily may be possible, if really desirable, the weekly review we propose to publish is an imperative need. The newspapers which appear every week under Catholic auspices in the United States, Canada and Mexico do not attempt to chronicle events of secular interest or to discuss questions of the day in the light of Christian principles. They are for the most part diocesan or local journals, many of them excellent in their way, but limited in the range of subjects, and circumscribed in territory.

There are hundreds of these local Catholic weekly newspapers, but not one general Catholic weekly review; or, to express it in terms which will appeal to many of our readers, we have no organ in America similar to The Tablet in England, and such an organ is quite as much needed here as it is indispensable there. Even the most unfriendly critic of this leading English Catholic weekly will admit that to it the Church in the British Isles owes much of its standing and influence. A periodical of equal merit in America will be of incalculable benefit to religion.

There is still more need of a first-class Catholic weekly periodical in this Western Hemisphere, and a wider field of utility for the same than in England, because with us, non-Catholics as a rule are not only more ready to hear our views, but they are also more eager to have us exert our proper influence in the national and social life. When counselling Father Coleridge, at the time he was planning The Month, Cardinal Newman advocated a periodical which would induce Catholics to take an intelligent interest in public affairs and not live as a class apart from their fellows of other beliefs. His counsel to Catholics in America even more than it applied to England in his day.

We are of a people who respect belief but who value action more.

We are of a people who respect belief but who value action more. We are going through a period when the most salutary influences of religion are needed to safeguard the very life and liberty and equal rights of the individual, to maintain the home, to foster honesty and sobriety, and to inculcate reverence for authority, and for the most sacred institutions, civil as well as ecclesiastical. We are more responsible than our non-Catholic fellow citizens for the welfare of thousands of immigrants of our own religion who come to us weekly, and for their amalgamation into the national life. We are responsible also for much of the ignorance of religious truth and for the prejudices which still prevail to a great extent, because, satisfied as we are of the security of our own position, we do not take the pains to explain it to others or to dispel their erroneous views.

The object, therefore, of this Review is to meet the needs here described and to supply in one central publication a record of Catholic achievement and a defense of Catholic doctrine, built up by skillful hands in every region of the Globe. It will discuss questions of the day affecting religion, morality, science and literature; give information and suggest principles that may help to the solution of the vital problems constantly thrust upon our people. These discussions will not be speculative nor academic, but practical and actual, with the invariable purpose of meeting some immediate need of truth, of creating interest in some social work or movement, of developing sound sentiment, and of exercising proper influence on public opinion. The Review will not only chronicle events of the day and the progress of the Church; it will also stimulate effort and originate movements for the betterment of the masses.

True to its name and to its character as a Catholic review, AMERICA will be cosmopolitan not only in contents but also in spirit.

​The name AMERICA embraces both North and South America, in fact, all this Western Hemisphere; the Review will, however, present to its readers all that interests Catholics in any part of the world, especially in Europe. It will preserve and expand the popular features of The Messenger, namely, the editorial, chronicle, reader or book reviews, notes on science, literature, education and sociology. Special short articles or leaders on current topics of interest, biographical sketches of prominent persons, comments on passing events, and correspondence from international centres, will be among the additional features which the editors hope to make equally popular with the readers of the new Review. Owing to the wide scope of its contents, and its strict avoidance of proselytism and of all unnecessary controversy, it is hoped that the Review will prove attractive, not only to Catholics, but to the large number of non-Catholics who desire information about Catholic affairs.

True to its name and to its character as a Catholic review, AMERICA will be cosmopolitan not only in contents but also in spirit. It will aim at becoming a representative exponent of Catholic thought and activity without bias or plea for special persons or parties. Promptness in meeting difficulties will be one of its chief merits, actuality will be another. Its news and correspondence will be fresh, full and accurate. Courtesy will preside over its relations with the press and other expounders of public sentiment. Far from interfering with any of the excellent Catholic newspapers already in existence, AMERICA will strive to broaden the scope of Catholic journalism and enable it to exert a wholesome influence on public opinion, and thus become a bond of union among Catholics and a factor in civic and social life.

​The task of editing this Review has been undertaken at the earnest solicitation of members of the Hierarchy and of prominent priests and laymen. Indeed, not a few non-Catholics have frequently expressed a desire to have such an organ of Catholic thought and influence, and surprise that nothing of the kind has hitherto existed. The Archbishop of New York, in whose jurisdiction the Review will be published, has cordially approved the project. It goes without saying that loyalty to the Holy See, and profound respect for the wishes and views of the Catholic Hierarchy, will be the animating principle of this Review. The board of editors consists of men representing various sections of North America. They will be assisted by eminent collaborators and contributors drawn from all ranks of the clergy and from the laity in every part of the world, some of whose names we publish in this number. ​

Bureaus of information established in the leading cities of Europe, Mexico, Central and South America will supply prompt and correct information concerning Catholic interests. Telegraph and cable will be used when needed, and neither labor nor expense will be spared to make AMERICA worthy of its name.