Christianity is not a self-help group 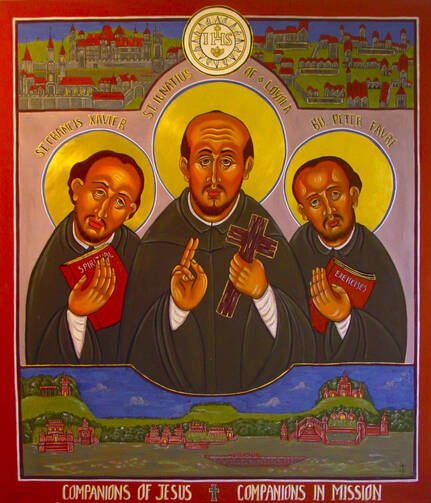 St. Francis Xavier, St. Ignatius of Loyola and Blessed Peter Faber are shown in an icon. Pope Francis is expected to issue a decree declaring one of his favorite Jesuits, Blessed Peter Faber, a saint. (CNS photo/courtesy of Jesuit General Curia)

Of the many changes we have made here at America in the last decade, among my favorites is the travel and pilgrimage program we launched for our readers, listeners and viewers. And of all the places we journey to together, my favorite is the Basque region of Spain, where we follow the path of St. Ignatius Loyola, a co-founder of the Jesuits. It’s one of the most beautiful places on earth, imbued with old world charm and world-renowned hospitality. Though I knew the story of Ignatius long before I first visited Spain, it was not until I literally walked in his footsteps that I came to really know the man.

Many of you probably know the story of St. Ignatius Loyola, whose feast day we celebrated in July—how an ambitious, vainglorious young man in the service of the king found himself in 1521 leading the defense of Pamplona against the most powerful army in Europe; how he refused to surrender in the face of the most desperate odds; how a cannonball shattered his leg as his army collapsed. You may have heard about how Ignatius was carried back to Loyola—for two excruciating weeks over mountainous terrain—to his ancestral home, where, while recovering from his wounds, he had a “conversion” experience while reading the Life of Christ and the Book of the Saints.

For most of us conversion is a process, a series of moments, of advance and setback, and the process lasts a lifetime.

You can visit the room where it happened—it is called the Chapel of the Conversion. Except that name is a misnomer. True, Ignatius’ conversion began there, but it did not end there. Other Christians may describe their conversion experiences as having occurred at a specific moment. They may even pinpoint the exact date and time. But Catholics don’t generally think about it that way. For most of us conversion is a process, a series of moments, of advance and setback, and the process lasts a lifetime. That was certainly true for Ignatius. He had resolved in his sickbed to serve his earthly king no more, but rather, to follow the King of Kings. So he set out to rival the greatest saints through extreme feats of prayer and fasting—and nearly killed himself in the process. Ignatius was sincere in his desire to become a new man when he left Loyola, but he was still pretty much what he had always been—willful and ego-driven.

It was not until he reached Manresa, a small town on the River Cardoner—where he was so distraught from the lack of progress in his new life that he even contemplated suicide—that he finally gave up his will to a higher power. At the banks of the Cardoner, he told God, in effect: “I give up. I have done all I can. I have tried everything. I’m handing it over to you, to do with it what you will.” And that’s the moment things really started to change. In the days that followed, Ignatius’ eyes were opened to mystical visions of God and creation that would nourish and inspire him for the rest of his life. At Pamplona, he had refused to surrender and lost the battle. At Manresa, he surrendered at last and won the war.

There is a big lesson in that: We are not in ultimate control of our faith journeys, any more than we control our ultimate destinies. It’s true that we have to put in the time and effort—God can do little for us if we are unwilling to cooperate. But Christianity is not a self-help group; it’s a God-help group. As long as Ignatius continued to act out of his grandiosity—out of the belief that he was the origin and destination of everything—then it didn’t matter which king he served. Yet when he finally began to act out of gratitude—out of the acknowledgement that God is the origin and destination of everything—then all things became possible. Indeed, things came to be that Ignatius could never have imagined—like a worldwide company of men and their lay colleagues laboring today to advance the kingdom of God on nearly every continent and in every conceivable kind of good work, including the many schools mentioned in this issue.

“Put to death, then, the parts of you that are earthly,” St. Paul told the Colossians. “Stop lying to one another, since you have taken off the old self with its practices and have put on the new self, which is being renewed, for knowledge, in the image of its creator.” Ignatius surely loved those words and would have seen his own experience in them, just as surely he would have seen his younger self in the words “vanity of vanities, all is vanity.”

To all that he might have added this admonition, a lesson forged in the crucible of his lifelong conversion: Stop lying to yourself too. The One who is the way and the life is also the truth. And the truth will set you free.

Matt Malone, S.J.
@americaeditor
Show Comments ()
Join the conversation: Login or create an account
Before you can comment, you need to update your profile to include your first and last name, as required in our comments policy. Then reload this page and you'll be set up for commenting. Update your profile