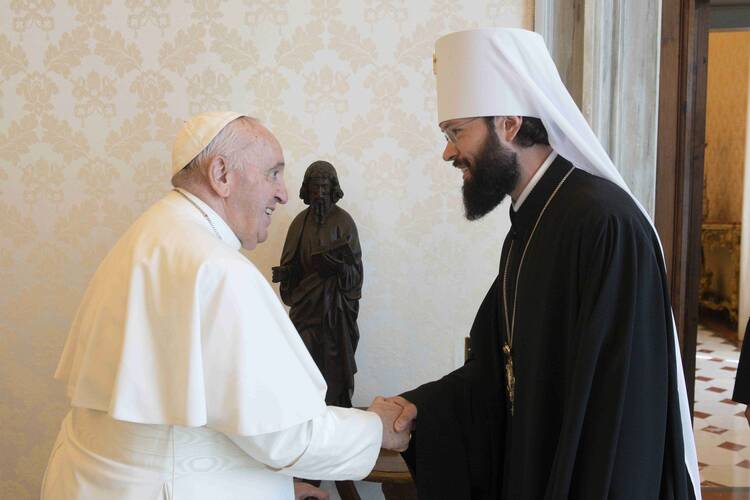 For the first time since the start of the war in Ukraine on Feb. 24, Pope Francis received in a private audience this morning a top-ranking member of the Russian Orthodox Church, second only to patriarch Kirill of Moscow. He welcomed Metropolitan Antonij [Anthony] of Volokolamsk, the president of the department of external affairs of the Moscow patriarchate, the equivalent of a foreign minister.

The meeting is significant for several reasons. It came at the request of the Patriarchate, according to a Vatican source who wished to remain anonymous, and comes ahead of Pope Francis’ visit to Kazakhstan (Sept. 13 to Sept. 15) for the VII Meeting of Leaders of World and Traditional Religions at Nur-Sultan (formerly Astaná), Kazakhstan’s capital. Patriarch Kirill of Moscow and All Russia will also attend. It is possible that the purpose of the visit is to arrange for a second face-to-face meeting with the patriarch in Nur-Sultan.

The Vatican did not reveal the contents of their conversation; it simply reported in its daily news bulletin that the encounter had taken place. But the Moscow Patriarchate’s department for external affairs issued a statement that read:

On August 5, at the invitation of Pope Francis, the chairman of the Department for External Church Relations of the Moscow Patriarchate, Metropolitan Anthony of Volokolamsk visited the Vatican, where he met with the head of the Roman Catholic Church in the Apostolic Palace. During the conversation, which was held in Italian, Pope Francis and Metropolitan Anthony discussed numerous issues on the agenda of Orthodox-Catholic relations, including in the context of political processes taking place in the world.

At the end of the long meeting, the interlocutors exchanged souvenirs.

The first-ever meeting between a pope and an Orthodox patriarch of Moscow and All Russia, since the division between Eastern and Western Christianity in 1054, took place in Havana, Cuba, on Feb. 12, 2016. The two religious leaders were scheduled to meet for a second time in Jerusalem on June 14 this year, but the Vatican canceled this encounter because of Patriarch Kirill’s public support for the Russian invasion of Ukraine. The patriarch refuses to call it a war, referring to it as “a special military operation.” He sees the invasion as a way to protect Russia and its Orthodox believers against a decadent West.

It is possible that the purpose of the visit is to arrange for a second face-to-face meeting between Pope Francis and Patriarch Kirill at the VII Meeting of Leaders of World and Traditional Religions in Kazakhstan.

Pope Francis, on the other hand, has spoken out more than 70 times against this “senseless war,” without ever blaming President Vladimir Putin directly so as to keep open the door for a possible mediation. He has repeatedly expressed his closeness to the “martyred people of the Ukraine,” called for a ceasefire and negotiated peace, and said he wants to visit Kyiv, a visit that could happen soon.

The pope and patriarch also held a 40-minute virtual meeting over Zoom on March 16, during which the patriarch sought to justify the war against Ukraine. The pope pushed back, however, by emphasizing that as religious leaders, they are called to work for peace and not to be “state officials.” He called on the patriarch not to be “the acolyte of Putin.” The pope made his remarks known in a press conference, something that did not go over well with the patriarchate.

This week’s meeting was Metropolitan Antonij’s first visit to the Vatican as the Russian Orthodox Church’s foreign minister. Last June, he replaced Metropolitan Hilarion, who had held the number two position in the Russian church from 2009 to 2022 but was removed unexpectedly and reassigned to be Metropolitan of Budapest, Hungary, reportedly because he disagreed with Kirill over the war in Ukraine. It is well known that Kirill’s support for the invasion and the war has created deep divisions within the Orthodox world, and especially in Ukraine, and it has been strongly criticized throughout most of the Christian world.

Pope Francis has spoken out more than 70 times against this “senseless war,” without ever blaming President Vladimir Putin directly so as to keep open the door for a possible mediation.

Before meeting Pope Francis, Metropolitan Antonij met his Vatican counterpart, the English archbishop Paul Gallagher. They reportedly met for just under one hour, but no details of their conversation have been released by the Vatican. Archbishop Gallagher had visited the Kremlin before the war started, at the invitation of Russian foreign minister Sergei Lavrov. The archbishop also visited Kyiv in May at the invitation of the Ukrainian foreign minister, Dmytro Kuleba. There he described Russia as “the aggressor” and said the Holy See supports “the territorial integrity”of Ukraine, positions clearly not shared by the patriarchate.

The visit of Metropolitan Antonij to Pope Francis is significant for other reasons, too. It could not have happened at this time without the approval of President Putin. As David Nazar, S.J., the rector of the Pontifical Oriental Institute in Rome, explained in an interview with America on March 17, “the Russian Orthodox Church…like everything else in Russia, is under the thumb of the government. To explain this simply, I sometimes say that if Putin says something on Tuesday, the Russian Patriarch has to say the same thing on Wednesday but just putting the word ‘God’ into the sentence.”

The question that arises from today’s meeting is, if President Putin would want Patriarch Kirill to meet Pope Francis in Kazakhstan, why at this time? Is it an attempt to neutralize or stop Francis speaking out against the war, or to show the world that Russia retains good relations with the Vatican?

Pope Francis has stated publicly that he would like to visit Moscow to speak to the Russian president, even before visiting Kyiv, in an effort to bring an end to the war, but so far Putin has shown no desire to invite him.

Reuters reports that Bulat Sarsenbayev, the head of the Kazakh organization hosting the congress, told the Astana Times that Kirill has confirmed his presence there. A senior Vatican source, who wished to remain anonymous because he was not authorized to speak publicly on the matter, told America that the two religious leaders were likely to meet in Nur-Sultan since they would both be present at that event. But whether they would meet in a private, face-to-face meeting was something yet to be decided.

Today’s meeting is also significant because it comes on the eve of Pope Francis’ meeting with Andril Yurash, the Ukrainian ambassador to the Holy See tomorrow morning on Aug. 6, during which they are expected to discuss his potential trip to Kyiv.