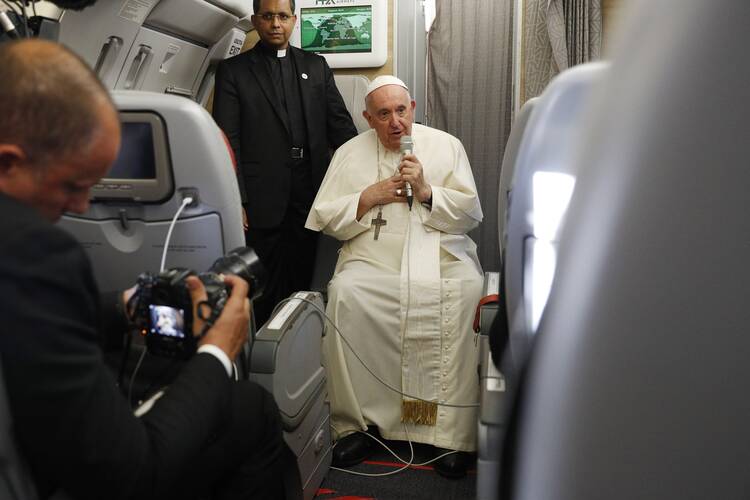 Pope Francis answers questions from journalists aboard his flight from Iqaluit, in the Canadian territory of Nunavut, to Rome July 29, 2022. (CNS photo/Paul Haring)

A relaxed and visibly happy Pope Francis gave a 45-minute press conference July 29 on the return flight from Canada. It marked the end of his successful weeklong “penitential pilgrimage” to the Indigenous peoples of Canada that took him on a journey of more than 12,000 miles.

He answered eight questions. The first two related directly to issues of concern to the Indigenous People, three of them were linked to the possibility of resignation and foreign travel, one asked whether there might be a development in church teaching regarding the use of contraceptives, another regarded the German synod, and last one was on the current Italian political crisis.

Francis told journalists that his weeklong trip to Canada was “a test” and since he felt he had passed it, he announced his intention to continue his foreign travels, though at a more measured pace than in the past.

“I don’t think I can go with the same pace of the trips as before. I think at my age and with this limitation, I have to save [my energies up] a bit to be able to serve the church or, on the contrary, think about the possibility of stepping aside. This [I say] with all honesty: it is not a catastrophe, it is possible to change [the] pope, it is possible to change, no problem! But I think I have to limit myself a bit with these efforts,” he said.

“I will try to continue to make trips and be close to people, because I think closeness is a way to serve.”

During the trip to Canada, he used a wheelchair, a walking stick, a walker and at the press conference he sat on a chair.

“Knee surgery for me isn’t an option, it isn’t O.K. for me, in my case. The technicians [health care professionals] say it is, but there is the whole problem of anesthesia. [Twelve] months ago, I underwent more than six hours of anesthesia, and there are still traces. You don’t play [around], you don’t mess around, with anesthesia. And that’s why I don’t think it is entirely appropriate,” he said.

Pope Francis concluded, “I will try to continue to make trips and be close to people, because I think closeness is a way to serve.”

He said he “desires” to go to Kyiv, plans to visit Kazakhstan in mid-September for a World Meeting of Religions, and wishes to pay his debts to the Democratic Republic of the Congo and South Sudan by visiting them with the Archbishop of Canterbury and the Moderator of the Church of Scotland. He said he also owes a debt to Lebanon and will pay it with a visit.

Prior to his trip to Canada, he was forced to cancel trips to Lebanon, South-Sudan and the Democratic Republic of the Congo because of problems in his right knee and leg.

The cultural genocide of residential schools and the doctrine of discovery

A Canadian journalist asked why he hadn’t used the term “cultural genocide” in reference to the residential school system in the country as the Truth and Reconciliation had done. Francis responded: “I didn’t use the word because it didn’t come to mind, but I described the genocide and asked for forgiveness, forgiveness for this ‘operation’ that is genocidal.” He recalled that, “for example, I condemned this too: Taking away children, changing culture, changing mentalities, changing traditions, changing a race, let’s say, a whole culture.” He concluded, “Genocide is a technical word but I didn’t use it because it didn’t come to mind, but I described [what happened]. It is true. It was genocide... You can say that I said that it was genocide.”

Responding to a Canadian journalist who said Indigenous people claim the doctrine of discovery somehow promoted the idea that the Indigenous Peoples of the countries newly “discovered” were inferior to the Catholics, Pope Francis said “this is a problem of all colonialism” and “even today’s ideological colonizations have the same pattern. Whoever doesn’t enter its path is inferior.”

“Even today’s ideological colonizations have the same pattern. Whoever doesn’t enter its path is inferior.”

He said that not only were they considered inferior, “some rather crazy theologian even wondered if they had a soul!” He recalled that Africans were put on a ship in dire conditions to become slaves in America, and while some like Bartolomé de las Casas or Peter Claver, spoke out, “they were the minority.” He recalled that “the consciousness of human equality came slowly” but “in the unconscious there is still something.” Because we still have “a somewhat colonialist attitude of reducing their culture to ours. It is something that comes to us from the developed way of life, our own, because of which we sometimes lose the values that they have.”

He said, “this doctrine of colonization, which it is true is bad and unfair, is used even today, with silk gloves.” He recalled that bishops from some countries told him, “When our country asks for credit from an international organization, they put conditions on us, even legislative, colonialist conditions. To give you credit they make you change your way of life a little bit.”

Pope Francis recalled that “in the colonization of America—let’s say that of the Americas—that of the British, the French, the Spanish, the Portuguese, there has always been a danger, a mentality of 'we are superior, and these indigenous people don’t matter.'” He denounced that as “serious” and for this reason, he said, “we have to go back and heal, let’s say, what was done wrong, in the knowledge that even today the same colonialism exists.”

The use of contraception

Asked if he was open to a revision of the church’s teaching regarding the use of contraception, Pope Francis said “dogma, morality, is always in a path of development, but in a development in the same direction.” He explained that “for the theological development of a moral or dogmatic issue” Vincent of Lerins identified “a rule that is very clear and illuminating” in the 10th century. Lerins said “that true doctrine in order to go forward, to develop, must not be quiet, it develops ut annis consolidetur, dilatetur tempore, sublimetur aetate. That is, it consolidates with time, it dilates and consolidates and comes more still but always progressing.”

“Theological development must be open, theologians are there for that. And the Magisterium must help to understand the limits.”

Francis explained that “the duty of theologians is research, theological reflection” and said, “you cannot do theology with a ‘no’ in front of it. Then it will be the Magisterium to say no, you have gone further, come back.” He said, “theological development must be open, theologians are there for that. And the Magisterium must help to understand the limits.”

On the issue of contraception, a book has been published on this and other marital issues, Pope Francis said. He was referring to the book containing the proceedings from a congress organized by the Pontifical Academy of Life. He explained that “those who participated in this congress did their duty, because they tried to move forward in doctrine, but in an ecclesial sense.” Francis added that, “then the Magisterium will speak.”

He cited how there had been a development of the church teaching on atomic weapons, and on the death penalty. He appeared to hint that there could be development too in the church’s teaching in regard to contraception. He said, “a church that does not develop its thinking in an ecclesial sense is a church that goes backwards … and this is the problem of today, of so many who call themselves traditional.” He said, “Tradition is precisely the root, the inspiration to go forward in the church.”

On the German synod

A German journalist, noting that the Holy See had issued an unsigned statement some days ago on Germany’s Synodal Way, asked Francis, “Do you think this way of communication contributes or is an obstacle to dialogue?”

Francis responded, “that communiqué was made by the Secretariat of State... It was a mistake not to sign it as Secretariat of State, but a mistake of office, not of ill will.” He recalled that he had written a letter about the Synodal Way two years ago, and said, “I wrote a letter, by myself I did it: a month with prayer, reflection, consultations. And I said everything I had to say about the Synodal Way, more than that I will not say.” He said that letter “is the papal Magisterium on the Synodal Way.”

He revealed, “I jumped over the Curia, because I didn’t do consultations [in the Curia], nothing. I did as my own path also as a pastor [for] a church that is looking for a path, as a brother, as a father and as a believer. And that is my message.” With this response, Francis distanced himself from the Holy See’s statement.

Italy without a government

An Italian journalist asked Francis for his thoughts about the recent collapse of the Italian government led by Mario Draghi. The pope began his response by saying, “I do not want to meddle in Italian domestic politics.” At the same time, he noted that President Draghi was recognized as “a man of high international quality” and “president of the [European Central Bank].” He said he had asked one of his staff, “tell me, how many governments has Italy had in this century? And he told me 20.” Francis concluded by saying political parties in Italy should show “Responsibility. Civic responsibility.”

[Read next: Birth control, IVF, euthanasia: The Vatican encouraged dialogue on polarizing life issues. Is a papal encyclical next?]