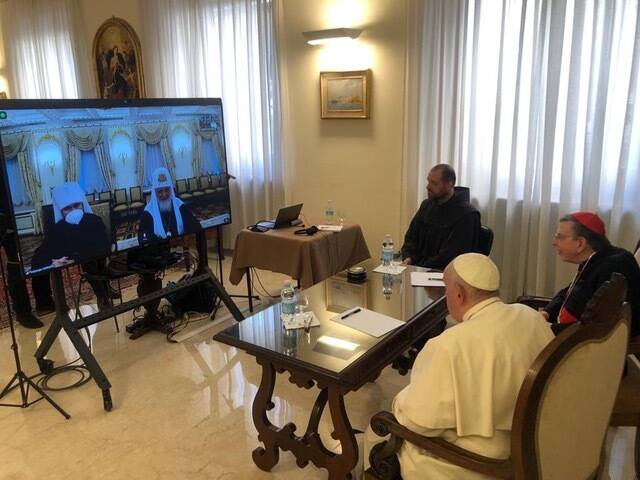 Pope Francis and Patriarch Kirill of Moscow met via video conference today, March 16, and expressed their joint hope that a just peace may be reached as soon as possible through the important negotiations between Ukraine and Russia now underway.

“The conversation centered on the war in Ukraine and the role of Christians and their pastors in doing everything so that peace prevails,” Matteo Bruni, the director of the Holy See Press Office said in a statement given to the press.

Earlier in the day, ANSA, the Italian news agency, reported on the meeting and offered a translation of a statement published on the website of the Russian Orthodox Patriarchate of Moscow. “The parties have underlined the exceptional importance of the negotiation process that is underway and expressed their hopes for the reaching of a just peace as soon as possible,” read the statement.

The Vatican statement, issued later, confirmed the call. But there was a significant difference in the language used in the two statements. The Moscow Patriarchate never used the word “war” in reference to Ukraine, whereas the Vatican quoted Pope Francis using the word several times.

“Pope Francis thanked the Patriarch for this encounter, which was motivated by the will to indicate, as shepherds of their people, a road to peace, to pray for the gift of peace, so that the fire may cease,” said the Vatican in their statement.

“The pope agreed with the Patriarch that ‘the church must never use the language of politics but the language of Jesus,’” the Vatican statement said. “We are shepherds of the same Holy People, who believe in God, in the Most Holy Trinity, in the Holy Mother of God: That is why we must unite together in the effort to help peace, to help those who suffer, to seek the ways of peace, to stop the fire.” According to the Vatican’s statement, “both church leaders underlined the exceptional importance of the ongoing negotiations between the two nations, because, the pope said, ‘The one who pays the bill for the war is the people, the Russian soldiers and the people who are bombed and die.’”

The pope reminded the patriarch that as pastors, “we have the duty to be close and to assist all those persons who suffer because of the war,” said the Vatican. “Once in our churches also there was talk of a holy war, a just war, but today one cannot speak this way. There has developed a Christian conscience of the importance of peace.”

Pope Francis agreed with the patriarch that “the churches are called to contribute to strengthening of peace and justice,” the Vatican added, quoting the pope, who said: “Wars are always unjust. For the one who pays is the people of God. Our hearts cannot help but cry in the face of the children, and the women killed, and all the victims of the war. War is never the way. The Spirit that unites us, calls us as pastors to help the people who suffer from the war.”

America has learned the meeting between the two religious leaders was first planned a week ago. It was not confirmed who initiated the exchange, but it was the first time the two have spoken since this war broke out. It is clear Pope Francis and Patriarch Kirill have in the past three weeks taken very different stances on the war in Ukraine.

“Once in our churches also there was talk of a holy war, a just war, but today one cannot speak this way,” the pope told the patriarch. “There has developed a Christian conscience of the importance of peace.”

The pope had sought to prevent the war entirely and has repeatedly called for an immediate ceasefire, an end to the attacks and bombings, and the guarantee of humanitarian corridors. On Feb. 25, 2022, the pope spoke with Aleksandr Avdeyev, the Russian Federation’s ambassador to the Holy See, who represents President Vladimir Putin. Throughout the escalating three-week conflict, Pope Francis has carefully avoided naming either Russia or President Putin in his public statements denouncing the war, so as to keep the door open for dialogue such as we have seen today.

Patriarch Kirill, for his part, has taken a stance that until now has been widely read as supportive of the Russian invasion, much to the dismay of many among the Russian Orthodox clergy and laity not only in Ukraine but also in the diaspora and elsewhere in the Orthodox world. The patriarch was also perceived as being close to President Putin on this and other issues. In Rome and in several Orthodox Churches and in the World Council of Churches, it was considered vitally important that Kirill, as Patriarch of Moscow and all Russia, should join the call for a ceasefire, an end to the fighting in Ukraine and support the search for a just and peaceful solution through negotiation.

It was considered vitally important that Patriarch Kirill should join the call for a ceasefire.

The two church leaders “had a long and detailed discussion on the situation in Ukraine,” said the statement by the patriarchate. “Particular attention was given to the humanitarian aspects of the present crisis and the actions of the Russian Orthodox church and the Roman Catholic Church to overcome its consequences.” The statement added that the two leaders “discussed also some current questions related to bilateral cooperation” but did not specify the issues to which this referred.

The patriarch was assisted at the conversation, according to the statement, by Metropolitan Hilarion di Volokolamsk, the president of the Department for Foreign Ecclesiastical Relations of the Patriarchate, and by an employee of the Department for Inter-Christian Relations, I. A. Nikolaev. Pope Francis was assisted by Cardinal Kurt Koch, the president of the Pontifical Council for the Promotion of Christian Unity, and the Rev. Jaromir Zadrapa, who is also a member of that council.

Pope Francis and Patriarch Kirill met for the first time in Havana, Cuba on Feb. 12, 2016, and are expected to meet again soon. Before the war in the Ukraine started, the Russian ambassador to the Holy See said their second encounter could take place in either June or July.