For Jesuits (and everyone else), the people you live with can be the hardest to serve. But that’s what we're called to do. 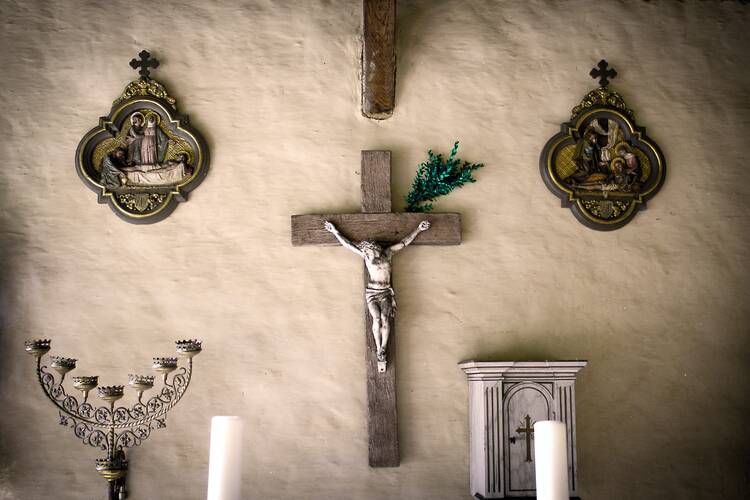 Photo by Matthieu Pétel on Unsplash

In December of 1994 I was walking with a group of people to the French Quarter when a kid stopped us, clearly sized me up as a tourist in my dusty-rose, suburban-Western snap-front shirt, and said, “For five bucks I can tell you where you got your shoes.”

Being ridiculously smarter than anyone else on that fey and bacchanal street, I said to this young fella, “Go ahead. Tell me.” You’ll never get this. How could you, living in New Orleans, have seen me hungrily roaming the orange and tan aisles of the Payless Shoe Source in downtown Boston? The boy said, quickly, with a straight-ahead grin, “You got your shoes on your feet and your feet on the street.”

I hope he used that fiver to buy himself a beignet and a nice rosary.

Members of the Society of Jesus have been called in recent years to see as mission territory not just our works out in the world, but the very communities in which we live. The “vineyard,” we are told, is not simply the refugee center, retreat house, painter's studio, communion line. It is more than the dun tiled walls of a slouchy geometry classroom; it is the homes we live in, the meals we share, the liturgies we celebrate. We are “sent” to one another.

This means, in part, shifting the measure of our lives away from only seeking success in our work. It calls us to bring a sharp “apostolic” game to dinner, faith sharing, preprandials (a recharche way of saying “gin”); those seemingly mundane things a Jesuit tends to want to finish so as to be able to rush off to pray with the JV basketball team before tipoff. . .

The call instead is to notice where we live, who we live with, and actually live there. To pay real attention, in other words, to where we got our shoes when our shoes are at home.

This new (though not really new) angle on Jesuit life is intended to aid us in giving witness to that which we exhort others to do. If we live together with at least some measure of esprit de corps (even if you have to fake it until you make it), if we engrain in ourselves some kind of ecological awareness, if we live in solidarity with the poor, we will “authenticate what we proclaim,” as one decree from our General Congregation 35 puts it. If we are living it, we can better preach it.

Jesuit leaders point us to the time the ten “First Companions” spent in Venice in 1537. Ignatius, Xavier, Faber, Lainez. They had taken vows together in Paris but were thwarted from going to the Holy Land. Finding themselves in Venice, they decided to work where they were. They were priests and academics but chose to minister directly to the sick, cleaning wounds, emptying slop buckets, hacking graves out of the soil. They piously licked sores and slept next to lepers. They ventured into other cities, going into town squares, yelling and waving their arms to gather people to be preached at.

The call instead is to notice where we live, who we live with, and actually live there. To pay real attention, in other words, to where we got our shoes when our shoes are at home.

As the documents of the Jesuit “General Congregation 36” put it, “During their time in Venice, the companions were not always together….nevertheless, it was at that time that they shared the experience of constituting a single group, united in following Christ, in the midst of the diversity of their activities.”

Being intentional as Jesuits “in here” apparently seeded and fueled their mission “out there,” and vice versa.

Honour is flashed off exploit, so we say,
And those strokes once that gashed flesh or galled shield
Should tongue that time now, trumpet that field…
But be the war within, the brand we wield
Unseen, the heroic breast not outward-steeled,
Earth hears no hurtle then from fiercest fray.

Ahhh, the war within! It is one thing to be in solidarity only with the poor out there, to flush out sin and ignorance in the vasty fields of France; it is often more elusive and even uncomfortable to also be in solidarity with the poor in our own houses: the guy whose mother is fading into incomprehension and what do you say; the brother who everyone says is a fantastic teacher but, assuming he’s already stuffed to the gills with accolades, few of us praise; the one who lives astride a burning wire of low-grade resentment that is never dealt with.

This is not an internal memo just for Jesuits. Nearly any passionate, good-hearted Christian who wants to serve the world with everything they’ve got, and also has obligations domestically—children, spouse, parents, housemates—might find themselves in this tension. Can you actually serve well both inside and outside?

In the Society, how can we in good faith spend a generous portion of time and energy attending to other men in our homes who seem to have so much already? Who already have been taught to run through with alacrity the five steps of the examen; who have already studied and worked their way into (pretty much) secure and (mostly) fulfilling jobs; who have long since read at leastthe first hundred pages of Ulysses and can swiftly translate Buck Mulligan’s opening lines to Dedaulus? Why spend our time working in fields that have already reaped their harvest?

Shouldn’t a Jesuit community—or the residence of any world-embracing Christian soldier—be pretty much just a flight attendant’s apartment? A place shared by three gals outside O’Hare where they briefly stay in between their jaunts around the airborne world, a kind of timeshare we visit for a hot second and then rush off into the mission fields to shepherd a waiting flock through the great journeys of their lives. Isn’t that more fitting for us?

There is that somewhat eye-rolling spiritual line found in retreat houses and spirituality centers, about the nature of the human creature. You know the one: stitched Amishly into a framed yellow cloth resting on a quivering end table in a small overheated mauve prayer room, it proclaims: You are a human being, not a human doing.

It is a spiritual axiom that, once you see it, you cannot get out of your mind. Because it makes a piercing claim: that people, no matter how much we do the opposite, are not simply “doers of things”; not even of the most socially just, pastorally beautiful, academically groundbreaking things. These words make the case that, no matter how vital those things are to our mission, the ultimate work of a Jesuit, and of anyone, is “not work”; that when it all comes down to it, every Christian, every person is called like St. Ignatius was, to lay down before the Black Madonna the sword of our labors and just simply be alive; be alive, and be with each other, and with our God.

"You are a human being, not a human doing."

Is that really true? That ultimately we’re just sort of supposed to sit around and…exist? Or is that the case only for the type of people who have time to stitch aphorisms into fabric?

There was a moment, once, in the dim sacristy of a chapel with five other Jesuits before the wedding of a mutual friend. The Jesuits were priests I had studied or worked with over the years. Some were friends, some just “friends in the Lord.” One I knew only distantly. They were vesting to celebrate the Mass, putting on albs and stoles and chasubles. Quiet tones, not the typical banter; the congregation a stone’s throw away outside the door, the main presider paging through the sacramentary, placing ribbons in the right places.

I would be serving the Mass and was putting on my cream-colored cassock, one of those kinds that has a thin braided rope that ties around the waist—a cincture. I didn’t know how to tie up the cincture of my cassock correctly, how to make the rope go just right. I felt, just for a moment, that way you feel when you are an adult and do not know how to do something it seems like you should know how to do. Ever so faintly stricken.

One of the priests, a former youth rancher who knew well the cinching of cassocks, came over and gently tied it for me. He showed me how the rope goes, over here and under there and down this way, a couple of the other guys coming over and watching his deft work. He got it to just the right length, trailing smartly down the waist and it looked just very good.

One of those moments on a Saturday afternoon in the back of a Marian chapel at a small northeastern women's college. If it seems very small, insignificant, if it seems like not the kind of heroic thing you “give everything up” to join religious life for, you are probably right. It probably does not matter that much.

But then why do I remember it so distinctly? And why is it a catch in time that I slip back into every so often as the years pass, the cincture, the ribbons, candles flickering just outside the door, the pre-liturgy quiet. A man is fixing, so to speak, the black bowtie of a fellow groomsman. The world doesn’t know and doesn’t care. A simple moment with a few men who were all trained basically the same way—discernment of spirits, bedpans, Aristotle, El Salvador, meretricious sophomores—and appear to have liked it; a moment with these guys that was wildly unproductive for the common good and later you realize is the common good.