The Parkland shooter, the death penalty and the limits of human compassion 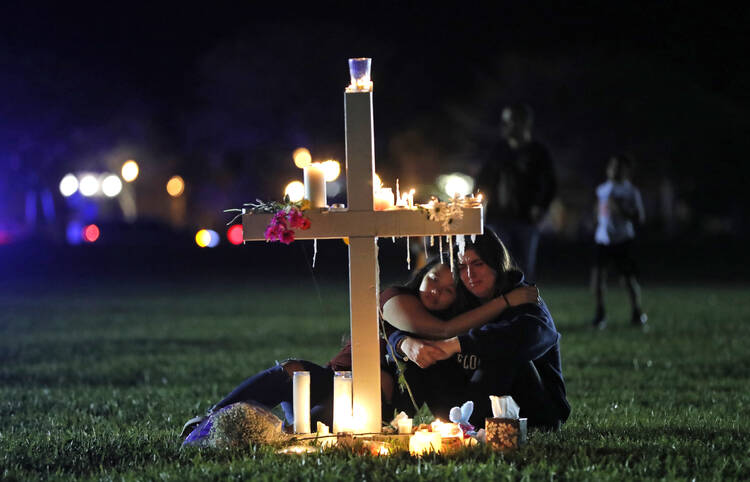 People comfort each other as they sit and mourn at one of seventeen crosses, Feb. 15, 2018, after a candlelight vigil for the victims of the shooting at Marjory Stoneman Douglas High School, in Parkland, Fla. (AP Photo/Gerald Herbert, File)

The first time I had to think about the death penalty was in 2013. I was 9 years old.

At that time, the United States had just experienced one of the most high-profile terrorist attacks on our soil since Sept. 11, 2001. I remember watching the local news that night and seeing the streets of Boston in shambles, trying to process their shaken security. One of the victims was 8 years old. My hometown is on the Boston Marathon route, and I’ve stood by the side of the road and watched the runners go by countless times.

When we learned more about the bomber, Dzhokhar Tsarnaev, it was hard to have any semblance of compassion for him, even though no one I knew was directly affected by the bombings. I can only imagine how hard it was for the victims and their families.

At the time, I wanted him to die.

It now seems that will come to pass; after nearly a decade on death row, in March the Supreme Court reinstated the death penalty for Mr. Tsarnev, though his attorneys have appealed the decision. I’ll admit, it is still hard to feel anything for him.

The Parkland shooter has already pleaded guilty. The only choice before the jury is whether to give the 23-year-old the death penalty or life without parole.

This week, there is another high-profile death penalty case in the national news. The trial has just begun for Nikolas Cruz, the Parkland shooter, who killed 17 people at a Florida high school in 2018. He has already pleaded guilty. We all saw the camera footage, and the evidence is undeniable. The only choice before the jury is whether to give the 23-year-old the death penalty or life without parole.

Once again, it is hard to feel anything for the shooter, let alone feel outrage if he ends up getting the death sentence. I’m part of a generation for whom school shootings have always been present; people like him are part of the reason why my peers have grown up afraid to even go to school.

I was also 9 years old when my parents sat me down and told me that 20 children were gunned down at Sandy Hook Elementary. We had that same conversation again when I was 15, this time about Parkland. The two biggest school shootings of that decade both happened to children who were around my age at the time; our generation’s school-age years were bookended by mass shootings.

I don’t say this to center myself. Once again, I’m not personally connected to either incident. I can only imagine how deep of a scar these shootings leave on those who experience them. Even then, my imagination is stretched beyond its limits.

The two biggest school shootings of that decade both happened to children who were around my age at the time; our generation’s school-age years were bookended by mass shootings.

It’s only to say that finding compassion in cases like Parkland is hard—for anyone.

Some death penalty cases are clear miscarriages of justice. Take Melissa Lucio, who was, many now believe, wrongfully convicted of killing her child following what amounted to a forced confession. It is easy for many, myself included, to believe that Ms. Lucio deserves to live.

I cannot say the same for Nikolas Cruz. Just like with my feelings toward Mr. Tsarnaev, there’s a part of me that wants to see him dead. I imagine I am not alone.

Our Catholic faith, though, calls us toward steadfast opposition to the death penalty in all circumstances. As Pope Francis explained in “Fratelli Tutti,” “There can be no stepping back from this position. Today we state clearly that ‘the death penalty is inadmissible’ and the Church is firmly committed to calling for its abolition worldwide” (No. 263).

No stepping back. So what do we do when we really, really want to “step back”? When we find ourselves at the furthest limits of human compassion, trying to muster up an ounce of feeling for someone who showed no compassion for others?

It is right and just to feel anger at people like the Parkland shooter. What do we do with that anger, though?

I think the key is to take a moment and breathe. Anger is a powerful emotion, and it is important to let ourselves feel it. The whole spectrum of human feeling has a place and a time; it is right and just to feel anger at people like the Parkland shooter.

What do we do with that anger, though? I remember a few years ago on Good Friday, I got into an argument with a friend. We both said some rude things to each other, over a dispute so small I can’t even remember it anymore.

A few hours later, that friend came back to me and said something that’s stuck with me to this day: “Good Friday is not the time to be angry. I’m sorry.”

That friend was entirely right, and I’m glad he took the space to pause and realize what I could not. The story of the Passion demonstrates exactly what happens when we let our anger control us—we find ourselves in the crowd, crying out the infamous lines from John’s Gospel: “Crucify him! Crucify him! Give us Barabbas!”

If we do not believe that Nikolas Cruz was created in the image and likeness of God, all is lost.

Of course, Nikolas Cruz is no Jesus. If anything, he’s more like Barabbas. That doesn’t change one crucial fact, however. Every human being—yes, even the Parkland shooter—is a unique person, created in the image of God.

That is a hard pill to swallow, but it’s at the center of the Christian faith. If we do not believe that Nikolas Cruz was created in the image and likeness of God, all is lost.

When we’re able to take a moment and step out of our justified rage, we begin to understand that truth, and we begin to see that when human lives are on the line, it’s not the time to let our rage overcome us. Good Friday isn’t the time to be angry, and in this world, every day is a little Good Friday. Even if Mr. Cruz or Mr. Tsarnaev deserve to be punished for their actions, it is not our place to kill them.

The death penalty is inadmissible, and there can be no stepping back from this position.

That is only the beginning of our questioning, though—and it is the easiest part. The jury in Mr. Cruz’s case will either sentence him to death or to life without parole. There are hard and serious questions to ask about that choice.

Is it right for someone who committed a crime at 19 years old to be paying for it when he is 90?

There is another section in “Fratelli Tutti” that gets overlooked entirely, at least in the United States. “All Christians and people of good will are today called to work not only for the abolition of the death penalty, legal or illegal, in all its forms, but also to work for the improvement of prison conditions, out of respect for the human dignity of persons deprived of their freedom,” Pope Francis writes. “I would link this to life imprisonment…. A life sentence is a secret death penalty.”

A life sentence is a secret death penalty, and there are over 200,000 people in U.S. prisons today serving those life sentences. Some countries, like Canada, have already abolished life without parole. Are we ready to have the even harder conversations about what it would really take to create a system rooted in restorative justice, even where it’s hard?

I’m not ready, honestly. I still want Nikolas Cruz to never see daylight again. I certainly think that we should decrease our use of life sentences, but I’m just not ready to extend that compassion to the furthest limits of my human capacity. I’m still angry.

At some point, however, we have to ask the real questions. Is such a sentence just? Even prison sentences beyond 20 years are exceptionally rare in many parts of the world. Is it right for someone who committed a crime at 19 years old to be paying for it when he is 90?

I don’t know, and we haven’t even begun to scratch the surface of that conversation in this country. The reason we haven’t is easy to understand: It’s hard. It tests our commitment to restorative justice at the absolute extremes.

I’m trying to think harder about what it means to believe that every human person has been created in the image and likeness of God. Frankly, that’s quite possibly the hardest part of the Christian faith for me to accept. Much harder than the real presence or even the Trinity.

For now, a simple prayer will suffice. “Lord, I believe; help my unbelief.” 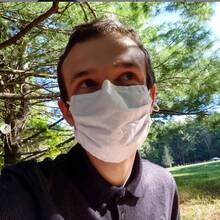 Stephen McNulty
@mcnulty_sm
Show Comments ()
Join the conversation: Login or create an account
Before you can comment, you need to update your profile to include your first and last name, as required in our comments policy. Then reload this page and you'll be set up for commenting. Update your profile