When it comes to abortion, are Catholics imposing their religion on others? 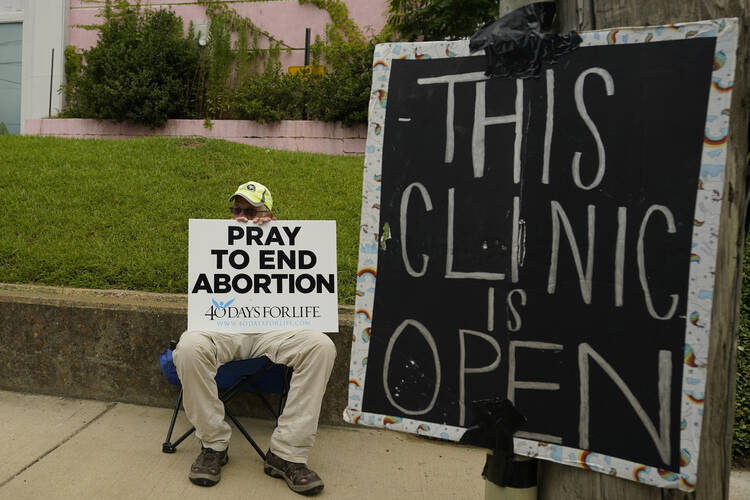 A Reflection for the Fifteenth Sunday in Ordinary Time

Are Catholics trying to impose their religion on others? Or, in the wake of the demise of Roe v. Wade, is an old prejudice being refitted by those who perceive Christian moral teaching to be personally restrictive?

“Keep your religion away from my rights,” some abortion rights activists will say.

It is an effective meme because most of us do hold that faith in God is the concern of the individual, not the community. Yet, the charge distorts Catholic moral teaching by suggesting that moral commands, conveyed through byzantine points of power and self-interest, are foisted upon the faithful, who then seek to impose them upon their societies.

Believers who oppose abortion are not doing so by divine dictate. On the contrary, though our ethical thought is certainly inspired by our religious faith, it is not directly derived from it. The three major religions of the West—Judaism, Christianity and Islam—teach that God has entered history through acts of revelation, but only fundamentalists within these faiths believe that God has dictated moral precepts that require no interpretation before application. Most Jews, Christians and Muslims are not fundamentalists. We do not believe that a quote, selected from a sacred Scripture, silences discussion.

Believers who oppose abortion are not doing so by divine dictate. On the contrary, though our ethical thought is certainly inspired by our religious faith, it is not directly derived from it.

Yes, religious people are influenced by group affiliation. Who is not? We all avoid swimming upstream. But it is not religious belief that divides the West on the question of abortion. Believers and unbelievers stand on both sides. Indeed, our primary ethicist never heard of Moses, Christ or Mohammed. The ancient Greek philosopher Aristotle defined humans as those who reason. We observe and respond as we interact with a changing world.

Here is a great cipher that evolutionary theory cannot decode: Reason ineluctably seeks to preserve itself. We are compelled to choose, both as individuals and as communities, whatever allows us to flourish, and we shun that which hinders the same. As Aristotle first enunciated it, reasoning involves obligation, a sense of purposeful involvement.

Most of us who profess belief in God do not think that God dictates laws to us. We do, however, think that a purpose has been written into reality, by the very intelligence from which it emerged. Over time and through collective effort, we believe that our intelligence is obligated to perceive and to respond to this purpose, thus allowing ourselves and our surrounding world to flourish.

This is what believers and nonbelievers have traditionally called “natural moral law.” Of course, it is not natural in the sense of biology. (We would not hesitate to amputate a gangrened limb.) And it is not “law” in the sense of being promulgated. If you understand natural moral law as “interactive learning with the world,” you can see why it defies both codification and quick consensus.

If you understand natural moral law as “interactive learning with the world,” you can see why it defies both codification and quick consensus.

The West has another great proponent of natural moral law. When a fundamentalist asked Jesus to spell out divine moral dictates, he responded with a story, not a list. The Good Samaritan is a pointed parable, asking if it is not obvious that we should look after a person who is in need. Religion, the attention we pay to divine revelation and the life and flourishing that we discover within it should make this apparent, but often it does not. Parables interrogate us. Are we the Good Samaritan? Or do we keep our eyes on faith and off the palpable needs of others?

Defenders of legal abortion present themselves as advocates of women and the poor, but many refuse to even discuss what is growing in a mother’s womb. To employ the now infamous and rightly ridiculed saying, is it really “just a clump of cells”? If some of us deny that abortion is a fundamental human right, what are we seeing in the womb, even more so as science has advanced since the 1973 Supreme Court decision? We see a person, one whose right to live cannot be legislated or ruled away.

Reality cannot be reduced to personal preference. We call this “clump” a child, and we mourn its loss in a miscarriage. In certain circumstances, this “clump” has the right to inherit from a parent who died before it emerged from the womb. And in most states, if you kill a woman with a wanted “clump” of such cells, you are charged with fetal homicide. Does the choice of word alone make all the difference: child or fetus? Reason repels contradiction. How has it not done so among us?

The United States has never been comfortable with Catholicism, but it is not the faith’s distinctive features and practice that frighten. Nation states resist transnational institutions from fear of foreign interests. With Roe v. Wade now washed away, Catholic thought is again being impugned as alien: Given the chance, Catholics only impose; they cannot truly engage in the construction of the commonweal.

But who says this when the Catholic Church teaches that racism is a sin? Or when the church reminds us that we have an obligation to care for the poor?

No one truly wants to live in a world where morality is not imposed.

Our system of nation states puts poor people on one side of a border and their exploiters on the other. It then speaks of illegal immigration. Transnational that it is, the Catholic Church responds by insisting that legislation cannot override our obligation to seek economic justice for all. Many Catholics do not like to hear this. In response, even they start to suggest that popes and bishops are imposing belief.

It is true that abortion cannot be legislated out of existence, yet many pro-life Christians refuse to ask themselves: Is there anything that would allow unborn children to flourish more than granting universal health care access to their mothers?

No one truly wants to live in a world where morality is not imposed. We legislate against tax fraud; we create statutes that protect the environment; we decry the Russian invasion of Ukraine as immoral. Yet, we rightly insist that communities impose upon individuals only when strong moral consensus has been achieved, and when the very values at stake must be defended.