Podcast: Is Pope Francis preparing for the next conclave? 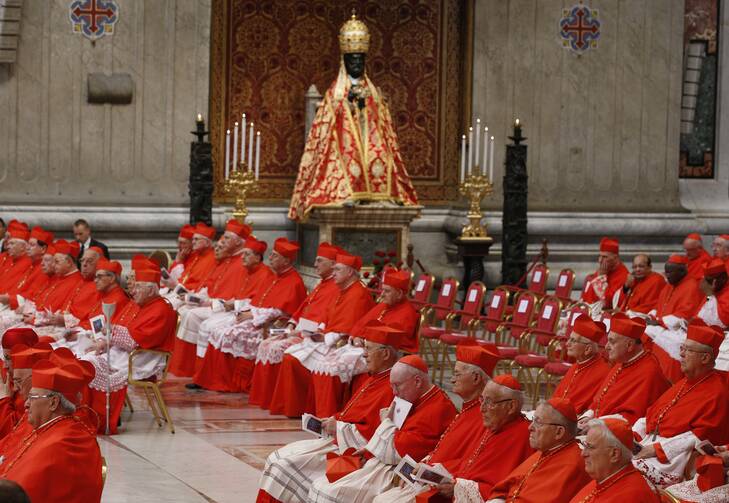 Cardinals attend a consistory led by Pope Francis to create new cardinals in St. Peter's Basilica at the Vatican in this June 28, 2018, file photo. The pope will create 21 new cardinals at an Aug. 27 consistory. (CNS photo/Paul Haring)

On Sunday, May 29, Pope Francis announced he would create 21 new cardinals this year, including U.S. Bishop Robert McElroy of San Diego and several other surprise choices. Sixteen of the new cardinals are under 80 and will be able to vote in a conclave, meaning Pope Francis has now appointed just under two-thirds of the current cardinal-electors. As of December, that number will rise to 69 percent.

This week on “Inside the Vatican,” host Colleen Dulle and veteran Vatican correspondent Gerard O’Connell discuss some of Pope Francis’ most interesting picks for the College of Cardinals. He has usually passed over “cardinalatial sees,” big cities where the bishop has often been named a cardinal, in favor of bishops from underrepresented communities.

“He wanted the conclave to reflect the diversity of the Catholic world,” Gerry says on this week’s show. “So now, on the 27th of August, when he makes the new batch of cardinals, you will have 69 countries reflected in the college of electors.”

Francis, it’s often said, chooses the person of the cardinal over the place the cardinal comes from. This idea was evident in the choice of the sole American bishop who was named a cardinal-designate this weekend: Bishop Robert McElroy of San Diego. Bishop McElroy, one of the leading intellectuals in the U.S. hierarchy, has been named while bishops from two other important metropolitan areas, Archbishop José H. Gomez in Los Angeles and Archbishop Salvatore Cordileone in San Francisco, were not. Gerry and Colleen discuss the message this appointment sends to the U.S. church, while dispelling speculation that Bishop McElroy was appointed in direct response to Archbishop Cordileone’s decision to bar U.S. House Speaker Nancy Pelosi from receiving communion.

“It had nothing to do with the last few weeks,” Gerry says, adding that his understanding is that the pope had made a decision about McElroy “way back.” “The pope has chosen him because of his overall vision; he’s not a single-issue cardinal.”

Then, Colleen and Gerry turn their focus to the global stage. Pope Francis named the first cardinal from the Dalit, or “untouchable,” caste in India. The hosts examine what effect this will have on India’s political leadership, which sees Christianity as a threat to the caste system. Gerry also tells the story behind Cardinal-designate Peter Ebere Okpaleke, a Nigerian prelate who was once rejected by the priests of a diocese for belonging to a different ethnic group. Ultimately, Bishop Okpaleke resigned and was assigned to another diocese.

“Francis, I’m told, one of the reasons that he chose this man was obviously in reaction to this [situation], but also because he saw that he was humble, that he resigned,” Gerry says. “The message is strong. Just as in India, he’s hitting against the caste system by making cardinal one of the untouchables, here in Africa he’s choosing a candidate who was rejected because he was of another tribal group.”

Colleen and Gerry also discuss Mongolia’s first cardinal-designate, the Italian-born Bishop Giorgio Marengo who, Gerry points out, met the pope with a delegation of Buddhists from Mongolia just before being named bishop. “Whether he got inspiration at that meeting to make the new cardinal, we don’t know,” Gerry says, “but it would not surprise me.”

The College of Cardinals’ primary job is to elect a new pope, so Colleen and Gerry end the show by discussing how Pope Francis may be preparing for the next conclave by calling the world’s cardinals to Rome for an extraordinary meeting just after the new cardinals are created in August. The meeting, on paper, is meant to be a time for the cardinals to reflect on Pope Francis’ reform of the Roman Curia, but there could be another motivation: “He hasn’t explained it, but I think this is really his way of providing a possibility for the cardinals to get to know each other”—responding to a key complaint of cardinals at the 2005 conclave, who, having not gathered since the second 1978 conclave, didn’t know each other well. This lack of familiarity led, in part, to the election of Cardinal Ratzinger, a high-ranking, well-known Curia official, as pope.

Nonetheless, Gerry says, “I do not see a conclave on the immediate horizon.” While some journalists have speculated that this could be Pope Francis’ final consistory, Gerry is not convinced. “He’s got a problem with his knee, and that incapacitates his mobility, but that is all,” he said, recalling that Franklin Delano Roosevelt governed the United States from a wheelchair for more than a decade.

Bishop McElroy: Pope Francis and Vatican II give us a road map for the synodal process

Voting Catholic: How to vote Catholic with Bishop Robert McElroy

Bishop McElroy: When bishops increase barriers to Communion, we are not being the pastors Pope Francis called us to be.

The Election of Pope Francis: An Inside Account of the Conclave That Changed History by Gerard O’Connell