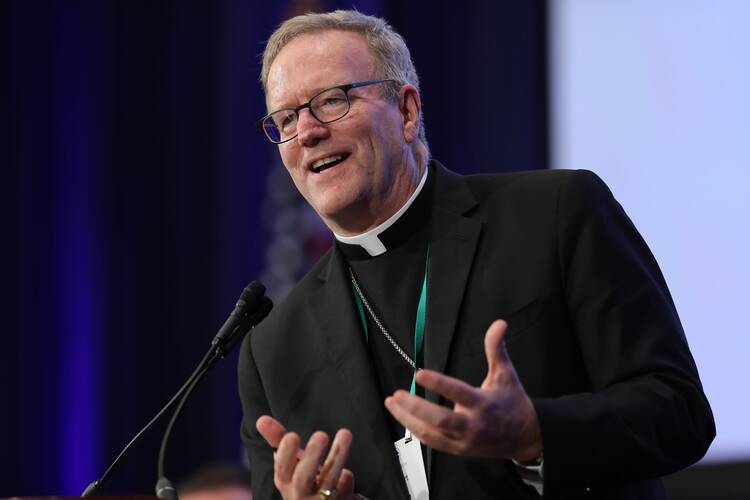 Bishop Robert Barron is headed back to the Midwest.

The 62-year-old Chicago native who founded the Word on Fire ministry and who has served as an auxiliary bishop in Los Angeles since 2015 was appointed the next bishop of Winona-Rochester, Minn., by Pope Francis, the papal nuncio to the United States announced Thursday.

Word on Fire, an influential publisher and content creator, is perhaps most known for its 10-episode Catholicism series, which aired on PBS in 2011. Bishop Barron is a prolific writer and speaker about Catholic issues and has over 3 million Facebook followers, 517,000 YouTube subscribers, 349,000 Instagram followers and 198,000 Twitter followers.

The 62-year-old Chicago native who founded the Word on Fire ministry was appointed the next bishop of Winona-Rochester, Minn., by Pope Francis.

In a statement about his appointment, Bishop Barron expressed gratitude to Archbishop José Gomez of Los Angeles and to Catholics in Southern California and said that he looked forward to his move to Minnesota. Word on Fire, which is based in Illinois, would continue its work, he said.

“Through our gifted staff, we will keep bringing you regular videos, interviews, articles, sermons, and daily reflections,” he said. “We will press forward with the Word on Fire Institute, the Word on Fire Bible series, the Liturgy of the Hours initiative, our many books and YouTube shows, and more exciting things coming down the pipeline.”

His installation will be July 29.

Bishop Barron’s appointment comes on the heels of revelations that several staff members have left Word on Fire amid fallout from how the organization handled sexual misconduct complaints against a senior leader. According to a June 1 article in the National Catholic Reporter, Word on Fire’s Joseph Gloor contributed to a hostile work climate at the organization, which is alleged to have mishandled complaints of sexual misconduct against him. The alleged misconduct did not involve other employees, and Word on Fire has denied the allegations.

Bishop Barron called it “an extraordinary privilege” to have served as a Los Angeles auxiliary bishop for the past seven years.

Bishop Barron called it “an extraordinary privilege” to have served as a Los Angeles auxiliary bishop for the past seven years.

“The priests and people received me, from the beginning, with warmth and enthusiasm,” he said in his statement, adding that he had “the good fortune to observe close up” the ministry of Archbishop Gomez, whom he called “one of the great churchmen on the scene today.”

In Minnesota, Archbishop Bernard A. Hebda of St. Paul and Minneapolis welcomed Bishop Barron’s appointment and said he looked forward to collaborating with him “as he joins the bishops of our state in striving to provide pastoral leadership after the heart of Christ, the Good Shepherd.”

“I have long admired his ministry and am delighted that he will now be bringing his rich experience and considerable gifts as a teacher and preacher to the people of southern Minnesota, building on the firm foundation that is Bishop John Quinn’s legacy after 13 years of faithful ministry,” Archbishop Hebda said in a statement.

The former rector of Chicago’s Mundelein Seminary, Bishop Barron has risen in the ranks of leadership in the U.S. Conference of Catholic Bishops, heading its Committee on Evangelization and Catechesis from 2017 to 2020 and will lead the Committee on Laity, Marriage, Family Life and Youth beginning later this year.

Bishop Barron will replace the retiring Bishop John M. Quinn, who has led the Minnesota diocese since 2009.

Material from Catholic News Service was used in this story.