Is there a better way to pray the Our Father? Our readers weigh in. 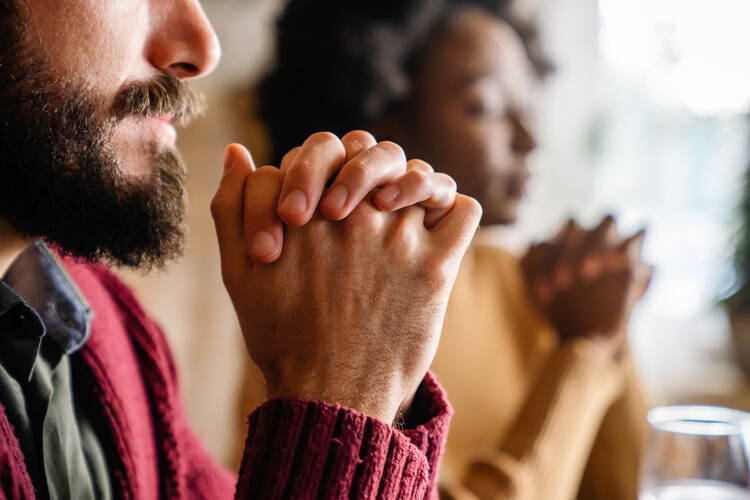 Nathan Schneider, in his article “Have Catholics been praying the Our Father all wrong?” (May 2022), examines the ways in which believers of all stripes—Catholics, Protestants, Christian Scientists and even deists—have re-examined and reinterpreted the language of the Lord’s Prayer for devotional purposes. Attempts to personalize the prayer’s text are not impious, Schneider writes; instead, these efforts should be recognized for the way they “represent a lineage and a genre, a longstanding urge.” America’s readers responded with their own thoughts about tailoring the prayer that Jesus taught us.

I have spent a lifetime rewording the lines of this “how-to” prayer, and finally realize that it is somewhat like a song-sheet: What you do with it is reproduce it in a living voice, with mind- and heart-grace notes and flat notes, aria-like and wordlessly.... It is “how to pray,” not “what to pray.” For years, it has been my bedtime falling-asleep prayer. I never get to the end any more.
Joris Heise

As a woman, I find the Our Father painful to say. I try to change the language as much as possible. Also, the words kingdom, power and glory represent, for me, masculine qualities that I’m not much interested in. I love that a kind man from my meditation group out of Ireland has changed that to “Yours is the kingdom of love, yours is a powerful love, yours is a glorious love.” God cannot be male only.
Kathleen Simar

Gender is a gift that language often bestows on inanimate objects and nouns of all types. Jesus was crucified for the “sacrilege” of being a child of God, and his human gender (unquestionably male) did not matter. No doubt Jesus wanted to encourage us to be brothers and sisters and was not limiting God to masculine qualities.
Eugene Devany

I feel no need to paraphrase. The meaning of each traditional phrase is clear. Every time I pray, I feel myself resisting what is asked of me. “Thy will be done....” No, I want my will to be done. “As we forgive....” No, there are some people I am not prepared to forgive. Yet I say the words. This ambiguity is where I live. I need to be reminded of that every day.
Arthur Menu

Several years ago, my wife and I attended a Mass at St. Francis on the White Mountain Apache reservation. It was there that I was first introduced to the idea of making the Our Father a personal communication. Instead of the Our Father, the priest began with the Apache word for “Our Father-Mother,” and so on. His sensitivity to the Apache congregation guided the way he helped them to pray in a way that was meaningful to them. I took that as permission to do the same.
Ray Miller

As a Jesuit educated person, the one line that always gave me a problem was “lead us not into temptation.” Well, duh! God would not lead us to temptation. I always felt it should be more like, “help us to avoid temptation.” And then, wouldn’t you know, along comes the first Jesuit pope, and he had similar thoughts.
Steve Janowski

Neil Douglas-Klotz has written books on how very different Aramaic is from the Greek that is used in the New Testament text, from which our English translations are made. For example, The Lord’s prayer begins with “Our Father,” a translation of the word abba. But the actual Aramaic transliteration is Abwoon which is a blending of abba (“father”) and woon (“womb”)—Jesus’ recognition of the masculine and feminine source of creation.
Sally Forth

My Protestant grandmother told me how the ending “For thine is the kingdom, the power and the glory forever” gave her great solace, and she’d say it over and over. The kingdom, including our wealth and glory, including our prestige and pride.... These are all God’s, so don’t put stock in them being ours.
Lynn Vincentnathan