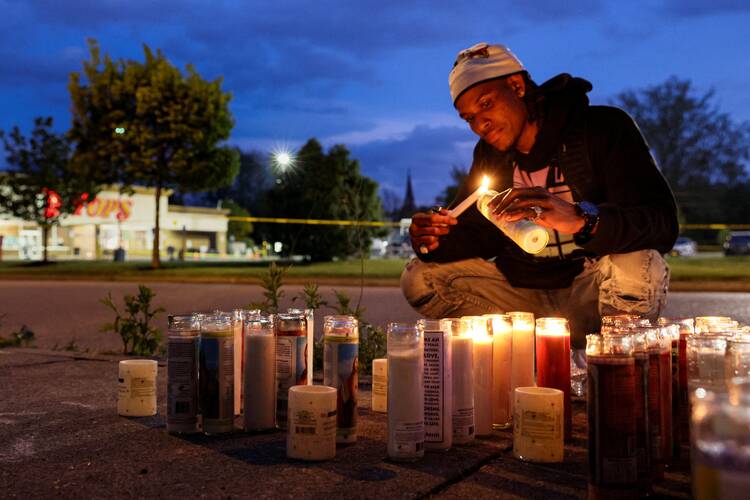 A man at a Tops supermarket in Buffalo, N.Y., lights a candle May 16, 2022, for the victims of a May 14 mass shooting that authorities said was motivated by racism. (CNS photo/Brendan McDermid, Reuters)

Last May, we moved a mile and a half into the heart of Milwaukee, Wis. My wife and I and our two girls arrived in the area four years earlier and bought a house one block north of the city line. At the time, we thought our older daughter, whom we had adopted only two months earlier, at the age of 15, needed to attend a particular high school in the suburbs. We may have been wrong about that. In any case, she graduated in May and we took the opportunity to move.

We bought what I describe as a big, ugly (the worst kind of aluminum siding) rectangle on a busy east-west street in the Riverwest neighborhood. There is a bar and a tattoo shop across from us. A great coffee shop is one block down. The neighborhood co-op is a block in the other direction. We live on the second floor. The first floor, a storefront, we are fixing up to be a meeting space.

We moved here because we wanted to be near the problems, rather than avoid them. Most days, I feel that way.

We have one child still at home, a fifth grader, and she now attends a city school. We live in a place where we encounter homeless people, noise at night, sirens sometimes and cars always moving too quickly. We work with Afghan refugee families, sponsoring them in an apartment not far from where we are. My wife, who is also a congregational rabbi, heads up a welcome circle. All of this often feels like good work to do in the world.

We moved here because we wanted to be near the problems, rather than avoid them.

But sometimes it feels futile. There is one homeless man, Adam, who I used to help but now I say no to when he seeks me out. There is no need to go into the reasons why. And it turns out that sometimes Afghan refugees are just like us, with prejudices, and days when they are not grateful. We have learned to keep the rose-colored glasses in a drawer.

The truth is, I feel helpless much of the time, as to how to make a difference, or even do good. Some people respond to problems by setting out immediately to solve them. My wife does this better than I. More often, I feel inept.

So when I started to pay attention to the murders happening near our home each week, sometimes every day, that is all I could do at first: Pay attention. I would read about them in my morning news feed as headlines.

I began to chart them on a map. There was, for instance, an incident at 79th and Capitol Drive, 5.7 miles from my house. Gregory Fabian was shot and killed on March 15 this year. A 28-year-old man is charged with his murder. From what I have read, it seems to have been a cocaine sale gone bad. The dead man was allegedly purchasing 3 grams of crack from the man who is accused of shooting him. I am told that a gram goes for about $100 in Milwaukee these days. So someone’s son killed someone else’s son over $300. Perhaps it is more complicated than that, but it does not make it less tragic. The alleged shooter was arrested by police in front of his home while holding a child and concealing a gun under his coat.

The opening lines of the “Serenity Prayer” of Reinhold Niebuhr have never really sat well with me. They especially do not when I feel confronted by a shooting such as this: “God, grant me the serenity to accept the things I cannot change; courage to change the things I can; and wisdom to know the difference.”

I want to pray differently. This is how I feel: “God, grant me unwillingness to accept what needs changing; wisdom to know what to do; and tell me what my serenity has to do with it.”

When a shooting took place on North Avenue, just west of Holton, only half a mile from my house, the shooter was in a passing car. A 31-year-old man died. It was 4 p.m. and the man who is now dead was coming out of a convenience store. Not knowing what else to do, I went to that corner on the morning after it happened.

I simply wanted to stand there and pray. I prayed: “God, our problems are so great. They seem unfixable. I don’t know what to do. But here I am. Somehow, I remain convinced that you are here. Somehow. Comfort them all in their suffering. The mothers of both the shot and the shooter, remind them of your love and show me, show all of us, how to remind them of the same. Amen.”

I want to pray differently: “God, grant me unwillingness to accept what needs changing; wisdom to know what to do; and tell me what my serenity has to do with it.”

Since that day, I have taken this simple practice to other suffering corners in our city.

I have been to 91st and Appleton, 7.9 miles from our house; to the Shake Shack in the Third Ward, 2.7 miles away; to 32nd and Oriole, 5.5 miles away; to North Avenue and Doctor MLK, Jr. Drive, less than a mile away; and to the front entrance of Rufus King High School, 2.4 miles from home, where a man shot four teenagers as they were leaving a Tuesday night basketball game.

Most recently, I was at the corner of Palmer and Chambers, where a 51-year-old man was shot and killed at about 7 p.m. I live half a mile away. Standing in our kitchen, I heard the shot so clearly that I thought it might have been across the street. The next morning, I stood at Palmer and Chambers—where there was no caution tape, no signs of an investigation—and said over and over, “Lord, have mercy.”

Am I doing any good at all? Does this make any difference whatsoever? I often doubt it. No one even knows I am there. I distribute no fliers. I speak to no one.

But I do think prayer is powerful, and I think it helps move us closer to the problems, if not the answers. And I believe that being a witness to suffering is crucial. Sometimes just standing in a spot and truly acknowledging pain, knowing we are helpless to relieve it, may be the best, or at least the only, thing we can do.

Jon M. Sweeney is an editor at Orbis Books and author of Feed the Wolf and Nicholas Black Elk.