Heaven, hell and a baptism in the NICU 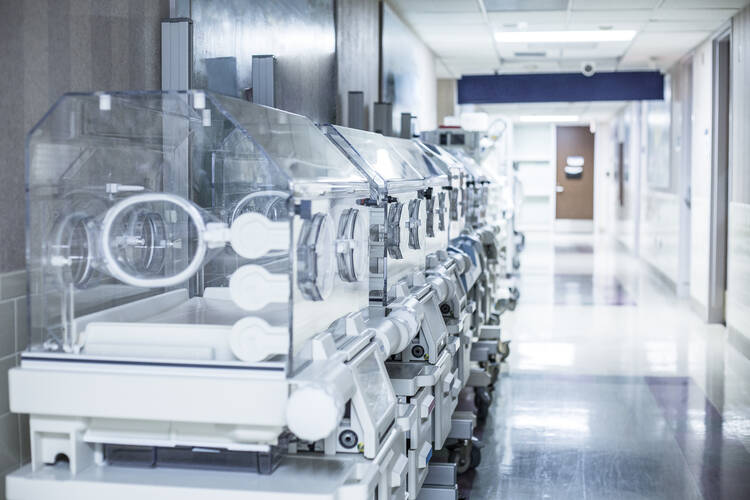 The room operated at a frantic pace, as it was. And then the baby was spontaneously delivered. A mother lay in bed wailing, her legs still hoisted. She kept screaming, “My baby.” A father sat in angry silence against the wall with his face in his hands. He would not answer any questions. Obstetric doctors and nurses shuffled utensils. And in the corner of the room, beneath a radiant warmer, I stood with another nurse holding the baby.

There was little forewarning how weighty the night or this child would be. A caution like the iconic epigraph Dante inscribed upon the gates of Hell would have been appropriate. “Abandon all hope ye who enter here,” was decidedly the sentiment in this labor and delivery room where I conducted my first baptism. I did not anticipate it. I naively thought I was going in to help the doctor intubate an infant who would grow to be another success story. I would have rather gone in ahead, knowing that the outcome was not going to be pretty. So, although the story herein ends in Heaven, be forewarned that, as the Supreme Poet also wrote, “the path to Paradise begins in Hell.”

It is not that I had imagined my first baptism many times. But as a young Jesuit studying for the Catholic priesthood, I suspected the first time I administered the sacrament would be, perhaps, for a newborn baby of one of my college friends. I suppose I pictured a white chasuble, the Paschal candle, and the grand baptismal font you see in the back of many parishes. I did not expect it would happen in such a traumatizing way at 2 a.m. in a hospital. And I would not have guessed it to have happened at the intersection of my vocations as both a Jesuit and a nurse.

There was no white chasuble and no white baptismal gown. I was not even in my comfy, ceil blue nursing scrubs; I had changed into sterilized, surgical scrubs for attending deliveries. Each shift, two nurses from the neonatal intensive care unit are designated as the high-risk delivery team, along with a respiratory therapist and a physician. The team often goes to labor and delivery to stabilize infants born prematurely. And frequently these infants are brought to the NICU for continued medical support in their development.

Attending deliveries is my favorite aspect of being a NICU nurse, for the obvious joy that it ordinarily occasions. The surgical scrubs for deliveries are a grim gray color called misty green. It is never a flattering look, and certainly not befitting garb for an extraordinary baptism. But the bleak color was befitting of the abysmal feeling that became tangible at this particular baby’s birth. If ever I contemplate Hell again, it will be in shades of misty green and gray.

The whole experience was hellacious, but most terribly so when the neonatal team concluded the cold truth that this baby was too severely immature to withstand our attempt at resuscitation. She was born on just the wrong side of the cusp of viability; a week or even just a few more days in the womb could have made a life-sustaining difference.

As the baby’s nurse, my first instinct was that the mother should hold her 11-ounce child in these final seconds. However, in such chaos even that comfort was unviable. It turns out Hell’s likeness is a good place to contemplate Heaven, for my very next thought was, This baby needs to be baptized. Baptism was the only act of healing I had left to offer my patient.

“I need water,” I said. “Could someone please bring me water?”

When the water for baptism was brought to the bedside, the next most difficult thing to find was the breath with which to speak.

It felt for a moment that we had entered another dimension. Maybe you have heard of the Celtic lore about thin places? The mythology goes that there are some locations or instances of life where the physical and metaphysical realities we straddle come close enough to eclipse each other. And one wonders there: On which side of the shroud lies our true reality? The atmosphere in the corner of the room where I stood by the baby was leery in the sort of way that the hereafter feels uncomfortably close upon the Cliffs of Moher.

When the water for baptism was brought to the bedside, the next most difficult thing to find was the breath with which to speak. Choking on grief, I could not breathe. I opened my mouth and soon shut it when I rapidly realized that the fragile facade my already cracking voice was unearthing would be all consumed by eruptive emotion.

It is a difficult thing to swallow when your own human capacities for healing have failed. I looked over to see the gentle and kind expression of the more experienced nurse across from me. I needed relief from the stifled sadness that hung like a boulder in my trachea. She looked at our patient with such tenderness. With heroic composure, her lips were pursed in an encouraging smile that fell on the languid infant cradled in the palm of her royal blue hospital glove.

I had to hurry.

Still in search of air, I tilted my head up in hope that it might be easier to breathe above the suffocating scene. But the truth is, the laws of atmospheric pressure hold even when the altitude difference is a few feet between you and the center of things. The space between me and the baby might as well have been the distance between the peaks of the cliffs and the sea. All the molecules and life around us were sinking toward the greatest force of gravity; the easiest place to breathe was nearest the baby.

Unsure of where the words would come from and with warm water dripping from the basin of my fingers, I baptized the baby girl in the name of the Father, the Son and the Holy Spirit.

In the aftermath of the six-minute life of this baby girl, I do believe I watched her be delivered twice, once from life in the womb and once unto One eternal.

I admit, the evangelical expression, “to be born again,” had never before resonated with me. But in the aftermath of the six-minute life of this baby girl, I do believe I watched her be delivered twice, once from life in the womb and once unto One eternal. This brief plunge into the Paschal Mystery was a baptism by fire for me, too.

And when it was all over, still in misty green scrubs, I stood facing a computer screen. I was trying to catch up on charting for another one of my patients back in the NICU when the charge nurse came up behind me. “Adam, are you O.K.?” she asked me. I could not turn to face her, for fear that the welling pressure would cause the fault lines of my eyes to fracture. Five hours of mourning this shift’s dark night remained before the morning. Without pivoting I nodded and continued charting. How would I have responded to her anyway? I think Dante explained Hell best when he said, “At grief so deep the tongue must wag in vain; the language of our sense and memory lacks the vocabulary for such pain.”

I never learned if the child’s parents gave her a name. But I do trust that an anonymous saint, crowned in the middle of that awful night, intercedes on our behalf now. May her brief life renew our belief that Paradise is indeed the end of this story. 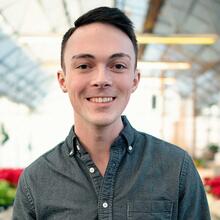 Adam Bohan, S.J., is a scholastic of the Midwest province and works as a registered nurse in Chicago.