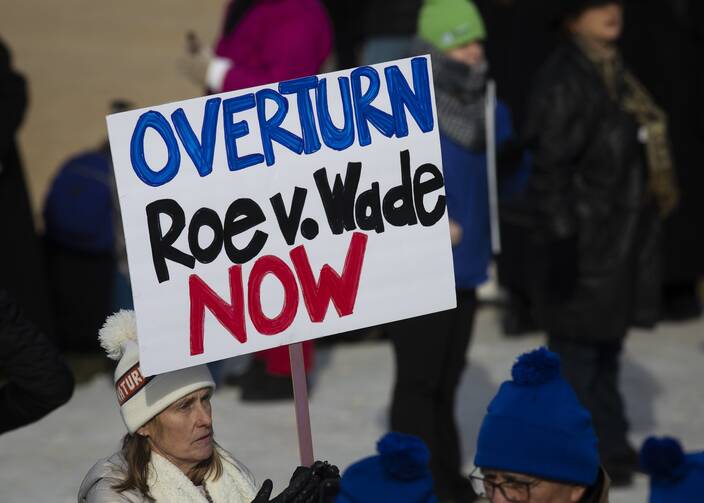 A pro-life sign is displayed Jan. 21, 2022, during the annual March for Life rally in Washington. (CNS photo/Tyler Orsburn)

It does not feel great to be a pro-lifer in general. That, at least, is nothing new. I remember an evening many years ago when the phone on the kitchen wall rang during dinner. My mother answered, and a girl’s voice said, loudly enough for everyone in the room to hear, “Is this the abortion clinic?” Then there was an explosion of giggles on the other end and the phone slammed down. It was almost 40 years ago, but I can still feel the crawlingly painful sensations of receiving that stupid prank call, which some teenager made to our house because we were known as those fanatics, those weird pro-lifers. I was angry and disgusted and most of all embarrassed. Because we were weird.

My parents, as enthusiastic converts, took us kids to a lot of pro-life rallies and prayer vigils. I remember one in particular, led by a group of evangelical prayer warriors who, after an emotional ad-libbed imprecation outside an abortion facility, unexpectedly brought out a large clay pot, held it dramatically overhead and then smashed it on the sidewalk. I am sure they explained what this was supposed to signify—something about Israel and broken covenants, I would guess. But I was in middle school, and all I knew was that, to my sorrow, the ground was not going to swallow me up. All my friends spent their weekends skiing and going to Bath & Body Works at the mall, and I was standing out on a sidewalk watching some weirdo sweep up pieces of a terra cotta flower pot because of dead babies.

Fortunately, my parents also gave me plenty of examples of what it means to actually live in a pro-life way. My mother was a magnet for vulnerable people, and she always cared for them and fought for their dignity, no matter who threatened it. My family cared not only for babies and their moms but for homeless people, the disabled and yes, the weirdos. When I sheepishly turned up pregnant myself, there was no question of being turned out of the house. My parents took care of me and my baby until I could more or less take care of myself. They were straight up pro-life for every life, no questions asked.

So I was well aware that the pro-life movement had its share of oddballs, but it always felt like something for me to get over. It was always very clear that the core principles were sound, and some people simply executed them in a cringey way. I remember thinking that I wasn’t likely to get tossed into an arena with a lion like one of the early Christian martyrs I adored, so instead I would prod myself to be more brave about being made fun of by my classmates.

And I wasn’t wrong. Sometimes that is what is called for, and embarrassment is a worthy suffering to offer up to the Lord, if that is what you have to give.

I was well aware that the pro-life movement had its share of oddballs, but it always felt like something for me to get over.

But the cause of my embarrassment has changed. You know what I mean. It is one thing to know that people think pro-lifers are dorky and uncool and to decide that you can live with that. It is quite another to know that people think pro-lifers are anti-woman and anti-immigrant and anti-poor people—and the reason they think so is because the most public faces of the pro-life party cannot seem to stop saying so.

Like many of my friends, I have backed away from identifying myself as pro-life in the last few years. I just don’t want to be associated with any of that. I stopped writing about it, stopped talking about it.

But the recent leak of the Supreme Court draft has made certain conversations unavoidable. It is a historic moment, and one that I welcome intellectually, if not emotionally, because I know it’s crucial if we’re to begin the work of building a world where abortion doesn’t seem necessary. I had to talk about it with my kids, and I have had to admit to myself that the reluctance I am feeling is not really anything more profound than embarrassment. It is nothing more complex than that same crawling sensation I felt as a child when I knew that the cool kids didn’t like me. I want to be motivated by something nobler than that, but I am not. I am just embarrassed. And I need to get over it because too much is at stake.

Don’t misunderstand me. As an adult, I understand so much more than I did as a child. It is no simple thing to oppose abortion. If it were merely a straightforward matter of good versus evil, weak versus strong, then I would feel no conflict. But in real life, abortion happens because there are victims on both sides and weakness everywhere, and the strong and the evil who caused so much pain and suffering are often nowhere in sight. Those with good intentions are left with a mop-up operation, trying to choose the least bad when there is nothing clearly good to choose from.

It is a terrible world, sometimes. Abortion makes it more terrible. But I understand why it can seem like the only solution.

That is what abortion often looks like in real life: not a rabid feminist rampaging against her defenseless fetus, but women being pushed into lives where they are punished endlessly for having bodies that are not like men’s. It is a terrible world, sometimes. Abortion makes it more terrible. But I understand why it can seem like the only solution, when problems are so deeply ingrained in the structure of society, and any hope or solace seems so far away.

All the same, there are pro-lifers who have managed to thread the needle. They have endured and have continued to hold the line. They have kept their eyes on that promise of hope and not allowed the worse-than-weirdos to wrench the work of being pro-life away from them. New Wave Feminists are one such group; Rehumanize International is another. And there are countless tiny organizations with boots on the ground that avoid politics altogether and simply, tirelessly help women, with food, shelter, money, housing, diapers, formula and kindness and care. I am sure they are embarrassed sometimes to be associated with what the pro-life movement has become. But they have not been overcome because the work is too important.