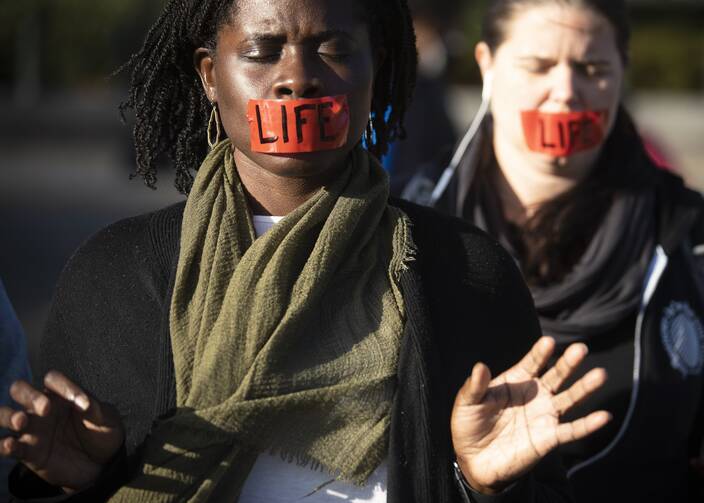 Pro-life advocates pray near the U.S. Supreme Court in Washington Nov. 1, 2021, during oral arguments in a challenge to a Texas law that bans abortion after six weeks. The high court sent the law back to the Texas Supreme Court, which ruled March 11, 2022, that abortion providers cannot challenge the state over enforcement of a law that allows private citizens to sue providers. (CNS photo/Tyler Orsburn)

The head of the U.S. bishops’ pro-life committee said a leaked draft of a possible Supreme Court opinion that could upend abortion laws “reminds us of the urgent need for prayer and action at this pivotal moment in our country” and called for intense prayer and fasting.

“As Catholics, we care about every unborn child and every mother,” Archbishop William Lori said in a statement on Wednesday. “Our Church has consistently witnessed in word and deed that life begins at the moment of conception.”

The archbishop pointed to ministries run by Catholics that seek to support pregnant women and young mothers.

“At the same time, as we await the Court’s decision, we urge everyone to intensify their prayer and fasting that the final decision of the Court will bring about the reversal of Roe and Casey,” he continued. “We hope and pray for a change in our laws and stand ready to help all pregnant women in need in each of our communities.”

The head of the U.S. bishops’ pro-life committee said a leaked draft of a possible Supreme Court opinion “reminds us of the urgent need for prayer and action at this pivotal moment in our country.”

Other bishops have commented publicly as well, with many expressing optimism that the court will rule against abortion rights while also calling for greater resources for people facing unplanned pregnancies.

“Tonight I am thinking of all the years of hard work by pro-life people of all faiths and none,” Archbishop Salvatore J. Cordileone of San Francisco posted on Twitter on May 2, hours after the draft of the court's opinion was published by Politico. “Years and years of patient advocacy, help for unwed moms, political engagement and more.”

The next day, Archbishop Bernard A. Hebda of St. Paul and Minneapolis said in a statement that he would “comment when the Supreme Court releases its official ruling.”

“No matter the court's decision, the Catholic Church will continue to work toward building a culture of life and supporting women and their children," he said.

“As Catholics, we care about every unborn child and every mother,” Archbishop William Lori said in a statement on Wednesday.

Bishop Mark Seitz, head of the Diocese of El Paso, wrote in a column that the draft gives him hope, but he also said that it is a call to Catholics to do more to support people facing unplanned pregnancies.

“It moves me to rededicate myself and the Church of El Paso to provide such dedicated care to mothers and fathers who find themselves facing an unexpected pregnancy that they would never feel pressure to seek to end that child’s life,” Bishop Seitz wrote.

Lay Catholics from across the ideological spectrum have also expressed opinions.

Catholics for Choice, an abortion rights advocacy organization with no ties to the institutional church, called the draft decision “unprecedented and shocking.”

“The alleged decision, decimating fifty years of the court’s own opinions, is an affront to our nation’s judicial process and devastating to the people whose lives are jeopardized by the court’s actions,” said the group’s leader, Jamie Manson, in a May 2 statement.

Another independent group, Catholic Vote, lauded the potential decision, stating that “it would mark the biggest victory in the history of the pro-life movement.”

“The pro-life movement has prayed and worked for decades for this,” said the head of Catholic Vote, Brian Burch, in the statement. And what happens next may be more important than any other event in the past four decades.”

A recent poll conducted by The Washington Post and ABC News found that a majority of Americans, 54 percent, want the court to uphold protections afforded by Roe vs. Wade. Among U.S. Catholics, more than half, 55 percent, express the same view.

Correction: An earlier version of this story misspelled the last name of Jamie Manson, the head of Catholics for Choice.