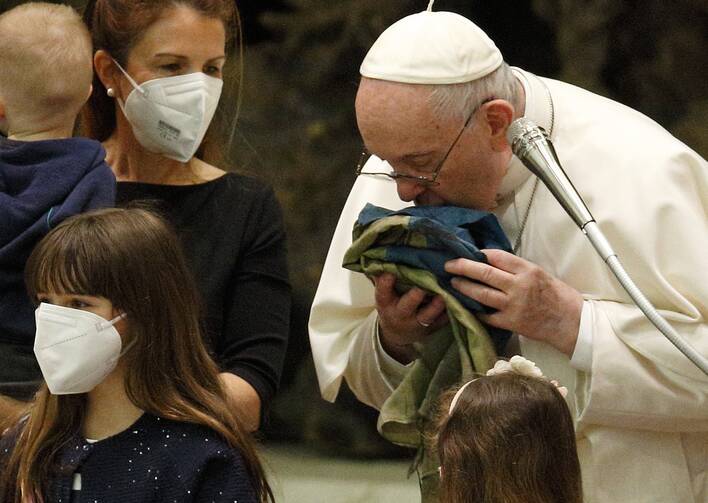 Pope Francis kisses a Ukrainian national flag from Bucha as he meets Ukrainian refugees during his general audience in the Paul VI hall at the Vatican April 6, 2022. The pope told the Argentine newspaper La Nación there will be no papal visit to Ukraine while war rages. (CNS photo/Paul Haring)

Catholics worldwide celebrated Holy Week as the latest Russian offensive began in Ukraine. In this episode of "Inside the Vatican," host Colleen Dulle and veteran Vatican correspondent Gerard O’Connell examine how the war was addressed in the Vatican’s Holy Week services.

Gerry and Colleen explain the controversy that led to one of the Stations of the Cross reflections, which was co-written by a Russian and Ukrainian woman, being changed before the service. They also review how the pope’s physical health looked, after the pope did not celebrate the Easter Vigil as was scheduled.

In the second half of the show, Colleen and Gerry turn to Vatican diplomacy, giving an overview of what diplomatic and religious relationships the Vatican has to keep in mind as it weighs its response to Russia’s invasion of Ukraine and the possibility of a papal visit to Kyiv.

A Ukrainian and a Russian were invited to lead the Vatican’s Via Crucis. Ukraine wants Pope Francis to reconsider.

Pope Francis calls for an Easter truce in Ukraine, leading to ‘peace through a true negotiation’

In Easter Message, Pope Francis calls for peace in Ukraine and world: ‘Peace is a duty; peace is everyone’s responsibility!’