Pope Francis calls for an Easter truce in Ukraine, leading to ‘peace through a true negotiation’ 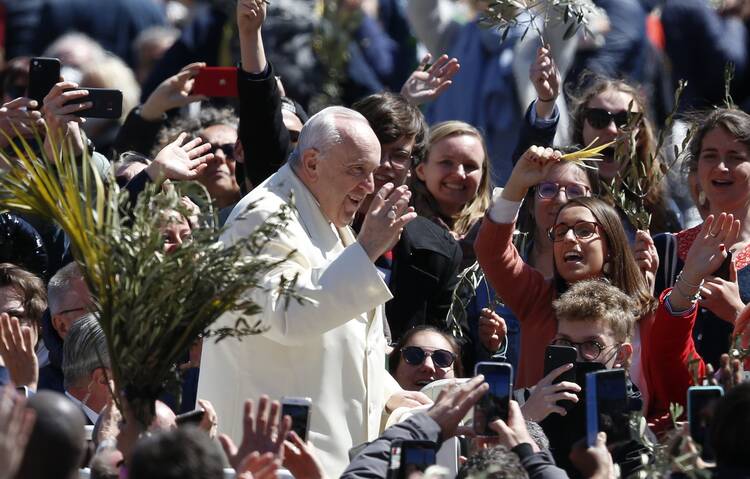 In a significant initiative, Pope Francis has called for a truce over Easter in the war in Ukraine, now in its 46th day. Specifically, he called for “a truce, not just to recharge the weapons and start fighting again. No! A truce to arrive at peace, through a true negotiation, and willingness also to make some sacrifice for the good of the people.”

Russian President Vladimir Putin ordered the invasion of Ukraine on Feb. 24. Since then, the attack, on this the second largest country in Europe after Russia, with a population of over 40 million people, has included terrible war crimes and the killing of countless civilians, including around 150 children. According to the United Nations, it has so far forced 4.5 million people to abandon their homes and become refugees in other countries. It has made another 6.6 million Ukrainians internally displaced.

“Nothing is impossible for God. He can even bring an end to a war whose end is not in sight.”

Speaking on the seventh Sunday of the war, Pope Francis told the 50,000 Romans and pilgrims attending the Palm Sunday celebration in St. Peter’s Square and a global audience of many millions following by television, radio and social media, that “Nothing is impossible for God. He can even bring an end to a war whose end is not in sight, a war that daily places before our eyes heinous massacres and atrocious cruelty committed against defenseless civilians.”

His remarks alluded to the war crimes that have been reported in the city of Bucha and at the train station in Kramatorsk, in eastern Ukraine, last Friday.

“Today there’s a war and they want to win it according to the way of the world. That way one only loses.”

Aware that the Russian Ministry of Defense has said that the first phase of the war had ended and the second phase will soon begin to gain total control of the Donbass region and the devastated city of Mariupol, Francis said, “Today there’s a war and they want to win it according to the way of the world.” But he commented, “That way one only loses.”

Instead, he asked, “Why don’t we let Christ win? He bore the cross to free us from the dominion of evil. He died so that life, love, and peace may reign.” In this context he made his appeal: “Lay down the arms, let a paschal truce begin, not just to recharge the weapons and start fighting again. No! A truce to arrive at peace, through a true negotiation, disposed also to make some sacrifice for the good of the people.”

Knowing that he was suggesting something that seems almost impossible today given that President Putin has given no indication of wanting to stop the war and clearly wants to win, Francis posed the question, “What kind of a victory would it be to plant a flag on a heap of ruins?”

As for stopping the war, Francis said, “Nothing is impossible to God!” He urged those present at the celebration and the global audience following it: “Let us entrust to him [this request] through the intercession of the Virgin Mary.”

Earlier at Mass, Francis delivered a profound homily on the theme of forgiveness and linked it to the war, as he recalled how Jesus on the cross said, “Father, forgive them for they know not what they do.” The pope added, “Jesus not only asked that they be forgiven, but also mentioned the reason why: for they know not what they do.” He said, “That is how Jesus acts in our regard: he makes himself our advocate. He does not set himself against us, but for us and against our sins.”

Then, clearly alluding to the war in the Ukraine, Francis said:

When we resort to violence, we show that we no longer know anything about God, who is our Father, or even about others, who are our brothers and sisters. We lose sight of why we are in the world and even end up committing senseless acts of cruelty. We see this in the folly of war, where Christ is crucified yet another time. Christ is once more nailed to the Cross in mothers who mourn the unjust death of husbands and sons. He is crucified in refugees who flee from bombs with children in their arms. He is crucified in the elderly left alone to die; in young people deprived of a future; in soldiers sent to kill their brothers and sisters.

His statement, in addition to his call for an Easter truce, could be interpreted in the context of the war in Ukraine and as a challenge to both President Putin and Patriarch Kirill, though he never mentioned either, since Mr. Putin professes to be a Russian Orthodox Christian and the patriarch of Moscow has effectively given his blessing to the war and the soldiers fighting in it.