In Easter Message, Pope Francis calls for peace in Ukraine and world: ‘Peace is a duty; peace is everyone’s responsibility!’ 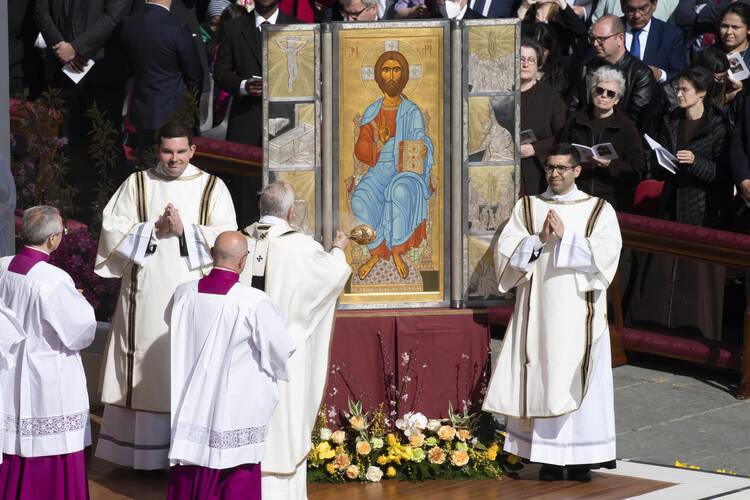 Pope Francis burns incense as he venerates an icon of the risen Jesus during Easter Mass in St. Peter's Square at the Vatican April 17, 2022. (CNS photo/Vatican Media)

Pope Francis made an impassioned plea for an end to the war in Ukraine in his Easter Message “Urbi et Orbi”—to the city of Rome and the world. He alluded to the risk that this conflict could descend into a nuclear war and insisted, “Peace is possible; peace is a duty; peace is everyone’s primary responsibility!”

He called for “a decision for peace” in that war now in its 53rd day and “an end to the flexing of muscles while people are suffering.”

He made his appeal after celebrating Mass in St. Peter’s Square and the Resurrection of Jesus from the dead, on Easter Sunday, April 17. He reminded the 100,000 people present—the largest gathering seen in that square and surrounding areas since the start of the pandemic two years ago—and a global audience of countless millions following by television, radio and social media that the first message of the Risen Jesus to “those who mourned him, locked behind closed doors and full of fear and anguish” was one of peace. “Peace be to you!”

Pope Francis: “We emerged from two years of pandemic... It was time to come out of the tunnel together, hand in hand... Instead, we are showing that we still have within us the spirit of Cain.”

Speaking on the eighth Sunday of the war in Ukraine, after driving in the popemobile among the crowd in the square, Francis said, “We emerged from two years of pandemic, which took a heavy toll. It was time to come out of the tunnel together, hand in hand, pooling our strengths and resources... Instead, we are showing that we still have within us the spirit of Cain, who saw Abel not as a brother, but as a rival, and thought about how to eliminate him. We need the crucified and risen Lord so that we can believe in the victory of love and hope for reconciliation. Today, more than ever, we need him to stand in our midst and repeat to us: ‘Peace be with you!’”

Pope Francis said this is the message of the Risen Jesus to us too on “the Easter of war,” a war in which “we have seen all too much blood, all too much violence” and “our hearts have been filled with fear and anguish, as so many of our brothers and sisters have had to lock themselves away in order to be safe from bombing.”

“Let us allow the peace of Christ to enter our lives, our homes, our countries!” he pleaded.

“May there be peace for war-torn Ukraine, so sorely tried by the violence and destruction of the cruel and senseless war into which it was dragged. In this terrible night of suffering and death, may a new dawn of hope soon appear!

“Let there be a decision for peace. May there be an end to the flexing of muscles while people are suffering,” he said. As he spoke, Russia was calling on the Ukrainian forces to surrender in the besieged and almost totally destroyed port city of Mariupol where over 100,000 people are living in fear in underground shelters lacking food, water and electricity.

“Please, let us not get used to war! Let us all commit ourselves to imploring peace, from our balconies and in our streets,” Pope Francis said.

He called on “the leaders of nations” to “hear people’s plea for peace” and to “listen to that troubling question posed by scientists almost 70 years ago: ‘Shall we put an end to the human race or shall mankind renounce war?’”

This question was first raised in the appeal against nuclear war made by two great European intellectuals of the 20th century, Bertrand Russell and Albert Einstein, in a peace manifesto issued on July 9, 1955, and Francis’ reference to it today reflects the danger he sees if the war continues in Ukraine.

Then, referring to the fact that 11 million Ukrainians out of a population of 44 million, have been forced to leave their homes—becoming either refugees or displaced persons since the war started on Feb. 24—the pope said, “I hold in my heart all the many Ukrainian victims, the millions of refugees and internally displaced persons, the divided families, the elderly left to themselves, the lives broken and the cities razed to the ground. I see the faces of the orphaned children fleeing from the war.

“As we look at them,” Francis said, “we cannot help but hear their cry of pain, along with that of all those other children who suffer throughout our world: those dying of hunger or lack of medical care, those who are victims of abuse and violence and those denied the right to be born.”

Pope Francis: “May there be peace for war-torn Ukraine, so sorely tried by the violence and destruction of the cruel and senseless war into which it was dragged. In this terrible night of suffering and death, may a new dawn of hope soon.”

Nevertheless, he said, “Amid the pain of the war, there are also encouraging signs, such as the open doors of all those families and communities that are welcoming migrants and refugees throughout Europe.” He prayed that “these numerous acts of charity” may “become a blessing for our societies, at times debased by selfishness and individualism, and help to make them welcoming to all.”

Then recalling the many conflicts in countries across the world, Pope Francis said, “May the conflict in Europe also make us more concerned about other situations of conflict, suffering and sorrow, situations that affect all too many areas of our world, situations that we cannot overlook and do not want to forget.”

He implored the Risen Christ to give peace to the Middle East, “racked by years of conflict and division.” He prayed especially for peace in Jerusalem where there have been violent clashes in recent days and for peace between Christians, Jews and Muslims alike and an end to the decades old conflict between Israelis and Palestinians.

He prayed for peace and reconciliation in Lebanon, Syria and Iraq, and “for all the Christian communities of the Middle East.” He prayed also for peace and stability in Libya and for Yemen, “which suffers from a conflict forgotten by all, with continuous victims” and expressed the hope that the truce signed in recent days may bring peace to its people.

Francis asked people to pray to the Risen Jesus “for the gift of reconciliation for Myanmar, where a dramatic scenario of hatred and violence persists, and for Afghanistan, where dangerous social tensions are not easing and a tragic humanitarian crisis is bringing great suffering to its people.”

Then turning to Africa, the pope prayed for peace in that continent, “so that the exploitation it suffers and the hemorrhaging caused by terrorist attacks—particularly in the Sahel region—may cease.” He prayed too for renewed “dialogue and reconciliation” in Ethiopia, “affected by a serious humanitarian crisis,” and “an end to violence” in the Democratic Republic of Congo. He called for solidarity with those living in the eastern part of South Africa, struck by devastating floods.

The first Latin American pope also prayed that the Risen Christ may “accompany and assist the people of Latin America, who in some cases have seen their social conditions worsen in these difficult times of pandemic, exacerbated as well by instances of crime, violence, corruption and drug trafficking.”

In March, Pope Francis met delegations from the indigenous peoples of Canada and promised to visit them in July. Today, he prayed that the Risen Lord “may accompany the journey of reconciliation that the Catholic Church in Canada is making with the indigenous peoples” and “may heal the wounds of the past and dispose hearts to seek truth and fraternity.”

Pope Francis concluded his Easter message to the world with these words: “Dear brothers and sisters, every war brings in its wake consequences that affect the entire human family: from grief and mourning to the drama of refugees, and to the economic and food crisis, the signs of which we are already seeing. Faced with the continuing signs of war, as well as the many painful setbacks to life, Jesus Christ, the victor over sin, fear and death, exhorts us not to surrender to evil and violence.

“May we be won over by the peace of Christ! Peace is possible; peace is a duty; peace is everyone’s primary responsibility!”