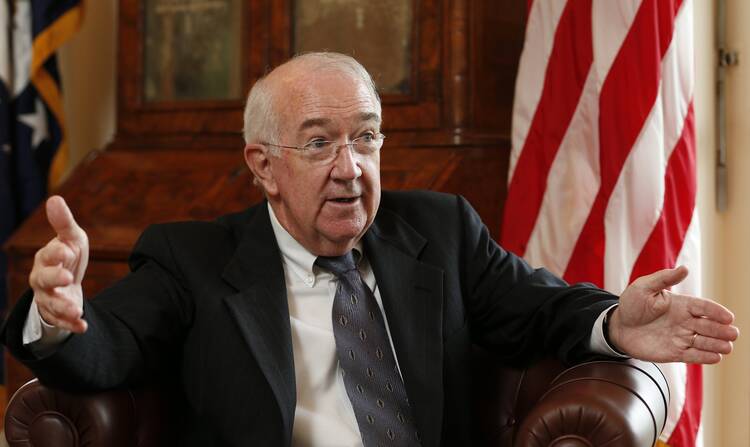 File photo: Ken Hackett, new U.S. ambassador to the Holy See, speaks during an interview with Catholic News Service at the U.S. Embassy to the Holy See in Rome Oct. 24, 2013. (CNS photo/Paul Haring)

Pope Francis has grown increasingly vocal against the war in Ukraine since Russian troops invaded on Feb. 24, although he has not specifically named Russia as the aggressor, seemingly in an effort to keep dialogue open between Russia and the Holy See. The pope has offered the Vatican as a mediator in the conflict, which Ukraine has welcomed and Russia has not. Ukrainian President Volodymyr Zelensky and Kyiv Mayor Vitali Klitschko have invited Pope Francis to visit Ukraine to deliver a message of peace and solidarity. Pope Francis has signaled his openness to visiting and admitted, in a recent mid-air press conference, the possibility “is on the table.”

But such a trip raises important questions for the Vatican and the pope: How would such a gesture affect Vatican-Russia and Catholic-Orthodox relations? Is a papal visit even possible or advisable given the pope’s recent knee problems? Above all, what would such a papal visit achieve?

Former U.S. Ambassador to the Holy See Ken Hackett, in an interview with America, shared his views on the possibility of a papal trip.

This interview has been edited for clarity, style and length.

Colleen Dulle: I am trying to get a sense of what diplomatic calculus the Holy See has to make around a possible papal trip to Ukraine. I have been really surprised by the pope continually saying he wants to go. So the first thing I wanted to ask you is where you stand on the possibility of a trip like this. What do you think? Do you think it is advisable?

Ken Hackett: Oh, I think it is advisable, for sure I think it has a tremendous symbolic impact if he is able to go.

The dynamics I see in this are—other than planning the trip and where he will go, what he will see, who he will meet, how he will meet them—there is this other dynamic in this case, and that is the relationship with the Moscow patriarch, Kirill. That is a serious dynamic in the sense that ever since Francis became pope, he has talked about a coming together of the Christian churches, particularly the Orthodox and the Catholics, and Kirill has not been very supportive of that effort. He sees Ecumenical Patriarch Bartholomew in Constantinople as leading a breakaway group. [Editor’s note: Patriarch Kirill accused Patriarch Bartholomew of schism last year.] And now, from what I read, there have been many Orthodox in Ukraine, who previously felt themselves associated with the Moscow patriarch, who have broken away and gone to this other [Ukrainian Orthodox] branch.

I do not believe his visit, in spite of what the new Ukrainian ambassador [to the Holy See] has said, is going to stop the war in any way. But it sends a very powerful message to the world Catholic community and the world community that is observing what is going on in Ukraine. As you well know, Pope Francis still carries a tremendous amount of public relations cachet. The three European prime ministers going to Ukraine was important, particularly in Europe, but did not get much play here [in the United States]. A visit from the pope will be globally symbolic, and CNN and MSNBC and everybody else will be covering it all over the place.

Ever since Francis became pope, he has talked about a coming together of the Christian churches, particularly the Orthodox and the Catholics, and Kirill has not been very supportive of that effort.

Do you think the pope could actually do this?

I think it is going to be really hard for him; from the physical and from the planning dynamic of it, it is enormous. I mean, you saw his sciatica was kicking up when he went to Malta, and these trips are grueling. I mean, really grueling. So there is that element.

And the preparations for such a visit are grueling. It is planned down to the minute, if it is anything like the one we put together for the United States in 2015. So he goes to Kyiv, how does he get in there? Where does he go in Kyiv? He probably stays at the nunciature. And when does he meet with Zelensky? Does he have a public Mass? There is a security dynamic in that—I mean, they are still bombing. So that all has to be considered, and it is a tremendous burden on the security apparatus in a country when he comes in. It was a national security event here in the United States; thus the same thing will be in play in Kyiv.

You brought up the comment of the new Ukrainian ambassador to the Holy See—that he thinks a papal visit could stop the war—and you said you disagreed with that. The ambassador also said this would be interpreted as the pope putting his finger on the scale on the side of Ukraine and would be read very negatively by Russia. I was curious if you could speak to that concern, and whether the pope’s words and actions represent a change in the Holy See’s relationship with Russia.

Yes, it does represent a change. The statement the pope made at the Angelus, the first week or second week after the invasion [when he declared Ash Wednesday a day of prayer and fasting for Ukraine] was kind of a little bit of a change. Many of my friends said, “Well, the pope did not criticize Russia.” And I said, “That is not what they do.” It is just never done that way. But look at what happened when he unfurled the Ukrainian flag from Bucha. That was a big symbolic gesture.

The dynamic with Patriarch Kirill—will he or his assistant say something criticizing the pope?—I do not think that will get much play. Maybe it will get play in Russia because Kirill still has an important role and people have great respect for him in Russia, particularly in the rural parts of Russia.

I do not think Putin cares. In my time there, I witnessed Putin visiting the pope and being 45 minutes late.

I doubt he will ever give up on them, but he may appreciate the realities much more now than he did six years ago [when he became the first pope in history to meet with a Russian Orthodox patriarch]. He has tried on many occasions to foster a deeper relationship with the Moscow patriarch: They have been invited numerous times to attend things at the Vatican. So, he has done, I think, as much as can be done in trying to foster positive relations with Patriarch Kirill—he is just getting nowhere.

I will bet people around the pope have convinced him that [attempts to dialogue with Russia are] not going to go anywhere with this patriarch, especially considering the relationship between Kirill and Putin. They are just intertwined: Putin uses Kirill, and Kirill probably uses Putin in a way too.

[Read next: Former Jesuit superior of Ukraine: ‘Putin is destroying the Russian Orthodox Church in Ukraine.’]

I wanted to ask you about the pope going to visit the Russian embassy and talking to the ambassador.

The Pope has done, I think, as much as can be done in trying to foster positive relations with Patriarch Kirill—he is just getting nowhere.

What was your reaction to that news?

Oh, I was shocked. That was just about the time people started asking me, “Is the pope not going to say anything?” I said, “Well, look what he did yesterday. He went to see the ambassador at the embassy!” That is so unprecedented. I do not think there has been a pope who has visited an embassy [to the Holy See] that I have ever read about.

And there is even significance in referring to it as a war and an invasion.

Back to the possibility of a papal visit: What are the pros here? What positives would the Holy See see in sending the pope to Ukraine?

Oh, it is quite simple. The action is the message, in my opinion. Going is the message. He does not have to say anything, just going and being there.

What is the message it sends?

The message of peace. It is like when he came to the United States, people from parts of the government wanted to know, “What can we agree on?” And I remember Archbishop Paul Gallagher [the Vatican’s secretary for relations with states] saying to them, “You do not have to agree on anything. He is there!” It is symbolism; it is important. And people read symbols. The fact the pope is in Ukraine or talks about Ukraine shows there is great concern. It is a peace message. That is what it is.

[Read next: Pope Francis is wise to not call out Putin directly. Here’s why.]