Why women can lead the church 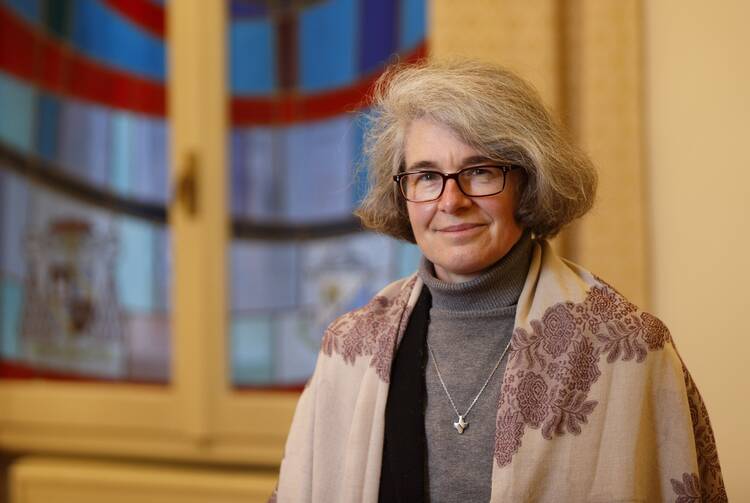 Xavière Missionary Sister Nathalie Becquart, undersecretary of the Synod of Bishops, is pictured in the chapel at her office at the Vatican Jan. 5, 2022. (CNS photo/Paul Haring)

In March, America Media rolled out its first-ever brand campaign, and it was organized around a theme: #OwnYourFaith. The campaign highlights America’s tradition of engaging in dialogue about topics that are not often discussed elsewhere in the church. To this end, Colleen Dulle, an associate editor of America, wrote about the future of women in the church in light of a new constitution for the Roman Curia. When it goes into effect in June, it will allow lay men and women to head Vatican dicasteries (“There Are Female Presidents and C.E.O.s. Why Are We Still Asking If Women Can Lead in the Church?” 3/28/22). Here is what readers had to say:

After reading your article, I said a prayer of thanks for you and for the Jesuits who have cleared a space for you and, thus, for women who do not in fact prefer to shout, for women who grieve the closed doors and closed ears which make some shouting necessary. Praise God for this day and your audible voice.
J. Jones

In an institution where the Blessed Mother is referred to by many as co-redemptrix, who has appeared to thousands for their spiritual benefit and consolation, whose intercession and promises are so greatly and often sought after—women are still considered lesser than men? The whole “separate but equal” argument is outdated and flawed. What would have become of the church without women’s support of every kind?
Juanita Menchaca

Your last paragraph is optimistic, and possible. I doubt it is realistic. Nothing, and I mean nothing, moves fast in the organization known as the Catholic Church. Two thousand-plus years support my observation. However, here’s hoping I’m totally wrong in my observation. Always remember: When the guys ran away, denied and hid during the crucifixion, the women were steadfast.
Stephen Healy

I am an older woman who is running out of time and patience while waiting for news of significant inclusion in the Catholic Church. Those in “positions of power” are denying a richness of thought, governance, competency, wisdom and both scientific and moral theology that women have to offer.
Mary O’Neil

The church needs confident and orthodox women in positions of real church leadership. Absolutely. But I think certain cohorts of the laity will only feel frustration and anger if they continue to pursue the topic of women’s ordination. The church needs to harness that healthy passion and energy and use it to address more pressing and real issues. And the church will be a much better institution because of their contributions.
George Barnidge

I am a life-long Catholic who loves my parish and my church. But as a senior citizen who faithfully attends Mass, I can honestly say I have never heard my experience preached about at Mass. The lack of feminine viewpoint is a loss to the entire church.
Mary Strickland

No laypeople of either sex are allowed to proclaim the Gospel at Mass. The “person of Christ” refers to being ordained first, then male second.
Bruce Ryman

When I attended Catholic schools in the 1950s and 60s, they were staffed by highly intelligent sisters who were teachers as well as administrators. Some of them were among the brightest people I have encountered in my life. However, they were not allowed to advance to positions of authority within the church. It had to be stifling for the best and the brightest of them to have their talents wasted in this manner.

Things have changed. In the 60s the feminist movement began to inform women that they were not second-class citizens, whose opportunities were limited. As a result, fewer women have found the church to be an attractive vocation.
L. Kenney

More: Women in the Church / Vatican