What if doubt is actually good for your faith? 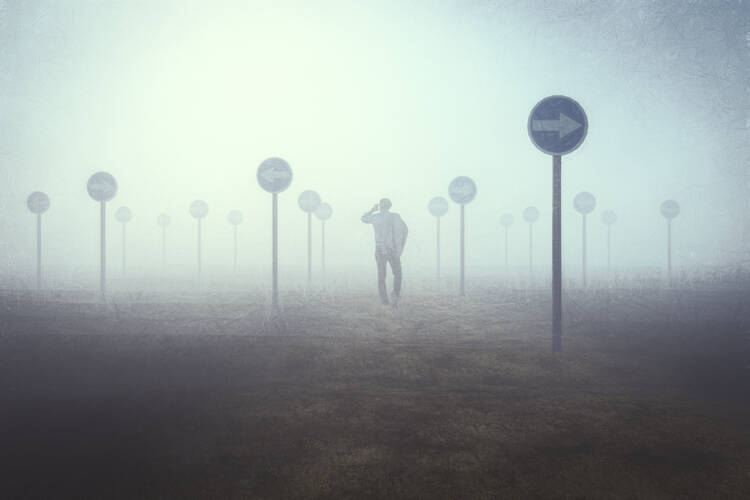 There is little point in seeking a faith free of doubts, Roger Haight, S.J., advises, describing doubt as “endemic.” (iStock)

St. Francis de Sales is the patron saint of journalists, and that’s fine. I have nothing against him. But I’ve always thought it should have been St. Thomas the Apostle.

I think of doubting Thomas as the world’s first journalist, determined to get confirmation for rumors he heard floating around the neighborhood about his former rabbi and a mysterious resurrection.

Thomas is considered something of a weak character because he had to see to believe, but I have a great deal of sympathy for him. I get it. He’s like me, looking for a reason to believe.

Once he touched the wounds and got the verification he was looking for, nothing held the no-longer-doubting Thomas back. He traveled the known and some parts of the barely known world, becoming one of the church’s finest good news reporters.

I was pretty much doomed to be a journalist. There is something deep in me that is most at ease with skepticism. My faith, too, resides anxiously in a muddle of doubt. Even as I write these words I feel it a faint, fleeting thing. So I go to Mass and I doubt; I pray and I doubt. I seek consolation in my doubt. I raise my children in the faith, and I frankly try most of the time to hide my doubt. Often I feel quite alone.

I shouldn’t, Shannon K. Evans tells me. “In my life and in the lives of people I love, I’ve noticed that doubt, as painful as it can be, really is an impetus to a more authentic, personal spiritual life,” she says by email. Ms. Evans is writer and speaker and, most recently, the author of Rewilding Motherhood: Your Path to an Empowered Feminine Spirituality.

“When we follow our curiosity and our questions, we often find ourselves in more honest dialogue with God and with ourselves,” she says. “Deconstruction is a buzz word for my generation, and it’s often treated like doubt, but in reality it is usually a sign of a maturing, critically-thinking faith.”

She suggests not hiding from doubt but rather normalizing it and even discussing it with a spiritual director, spouse or friends. And even, yes, talking about doubt with the children you hope to be raising in the faith—but perhaps only when you discern they are ready for it, and on a level they can understand, she says.

Before hosting these conversations myself, I have realized I might want to get my thoughts straight about what it is I am doubting.

“Experiencing doubt can mean a lot of things to different people or in different seasons of the same person’s life,” Ms. Evans says. “Doubting whether God exists and doubting the Catholic Church’s teachings might overlap, but they also might be entirely different experiences.”

There is little point in seeking a faith free of doubts, Roger Haight, S.J., advises, describing doubt as “endemic.” But he also argues that it can be a positive tool: “Always asking new questions and getting new answers is good.”

Father Haight, a theologian, author and visiting professor at Union Theological Seminary in New York, tries to make distinctions not only about different degrees and “sharpness” of doubt, but also between belief and faith.

Pope Francis, in 2013: “If one has the answers to all the questions—that is the proof that God is not with him.”

“Faith, it seems to me, does not reside in the mind. It resides in the whole person,” he says, noting how many individuals are moved to faith in ways that are often hard to articulate, including “affections and emotion, being drawn to liturgy and worship and music and bells and ritual.”

Because “if you knew it, you wouldn’t need faith,” he adds with a chuckle.

Distinguished from faith is belief, “formulas and propositions and statements that try to define the object of faith.” That’s a feat that can’t be achieved, he says, because “that which [we] are talking about is really not available to our comprehension.”

And because of that very human inarticulateness, “doubt becomes the most normal thing imaginable, because our beliefs can never catch up with the object of our faith.”

That means in the end an individual can be filled with doubts “about all the teachings of all the doctrines of every given religion” and continue to have faith even if they can’t quite define it.

“The words might be the same, but they don’t make the same sense.”

Even after years of formation, Stephen Molvarec, a Jesuit deacon who will be ordained a priest in June, remains in cordial tension with doubt. Giving himself “permission to doubt,” he explains, has provided valuable room for the growth of his faith.

Deacon Molverac is a regular contributor to The Jesuit Post and a chaplain at Boston University. The 20-year-old students at B.U. may believe that at 42 he has all the answers, but Deacon Molvarec says doubt has become “something that I’ve just come to accept as part of my life in the church.”

“Allowing a space for what we’re grappling with, what’s uncomfortable, what’s not working is a way through,” he says. “Doubt is often an intellectual thing,” he adds, “sometimes it can be a matter of the heart…. Sometimes I think doubt can be more experiential [after] we encounter great evil or suffering or hardship.”

Deacon Molvarec says that even after suffering that results in a profound sense of being abandoned by God, there is still often in that experience an irresistible desire “to cry out to God.”

“How can I cry out to a God that I think might not exist?” he wonders. “I think that tension or dynamic might eventually overcome the intellectual question of doubt.”

He notes the suffering of the people in Ukraine, marveling at their will to resist and their ability amid the struggle to find “something that’s good somewhere in life,” and he notes that such willingness to hope might itself be evidence of the presence of God.

Deacon Molvarec admits that the question of why a merciful God would permit such suffering cannot be answered, but adds, “If we’re going to ask a question about why evil exists in the world and why suffering exists in the world, I think we also have to be prepared to ask, ‘Well, why is there good in the world?’ Those questions can exist in tension with one another.”

The Problem With Certitude

Pope Francis has been a consistent supporter of embracing doubt in your faith life. In the historic interview published by America in 2013, Pope Francis said, “In this quest to seek and find God in all things there is still an area of uncertainty. There must be.

“If a person says that he met God with total certainty and is not touched by a margin of uncertainty, then this is not good.... If one has the answers to all the questions—that is the proof that God is not with him.”

Ms. Evans shares those misgivings. “When we’re talking about the divine, I think leaving room for a lot of mystery is the best practice. Certitude can make us rigid and uncompromising, putting us at odds with the Spirit’s desire to do new things," she says. "Also, I think it just sucks the fun out of spirituality.”

Doubters in pursuit of a firmer faith have plenty of models to connect with in the church, beginning with Thomas through a long list of saints like St. Thérèse of Lisieux and figures of spiritual inspiration and guidance like Thomas Merton. Mother Teresa may be the most notable candidate for a patron saint of doubters following a revelation that in her letters to friends and spiritual mentors she had recorded decades of struggle with doubt.

But Deacon Molvarec also suggests another candidate: Walter Ciszek, S.J. Many people know the historical narrative of Father Ciszek’s improbable escape from Soviet imprisonment through his autobiography With God in Russia, but Deacon Molvarec also recommends reading Father Ciszek’s He Leadeth Me to learn more about the Jesuit’s “internal narrative” during this bruising, precarious time in his life.

Deacon Molvarec adds a suggestion for doubters who hope to remain in pursuit of faith: “Fake it till you make it.”

“If you read it closely, Walter went through an immense period of darkness while he was in Lubyanka prison, held by Soviets and interrogated repeatedly and then working in the labor camps,” Deacon Molvarec says. His struggle with doubt is evident in the text, he says, but it also reveals his persistence in faith and trust in God.

For Ciszek the faith that overcomes doubt hinged on reciting a traditional prayer each day, Deacon Molvarec says, The Morning Offering, “in which everything is offered to God in kind of the way that Ignatius wants to do with the Suscipe, the prayer that closes the spiritual exercises.”

Deacon Molvarec adds a suggestion for doubters who hope to remain in pursuit of faith, taken from Pascal’s Pensées: Basically, it’s “fake it til you make it.”

“Go through the motions, go to Mass; try and pray and see what comes along,” he says. “I think there’s a certain wisdom in trying to overcome doubt by not just sitting and pondering and intellectualizing but actually doing something active.”

Father Haight also recommends examining your actions to find out what it is that you truly believe in. Is it God or is it just getting ahead?

Now that may prove an examination of facts and moral figuring that will require all my journalistic integrity to conclude. In the meantime, I may be ready to share my doubting faith with the children I hope to raise in this church, that it may be a light to them. And I’m prepared to soldier on at Mass in prayer and trembling, but perhaps also in consolation among the other faithful, joining with me each week in doubt and hope.