Good Friday: When we love selfishly, we kill the thing we love. 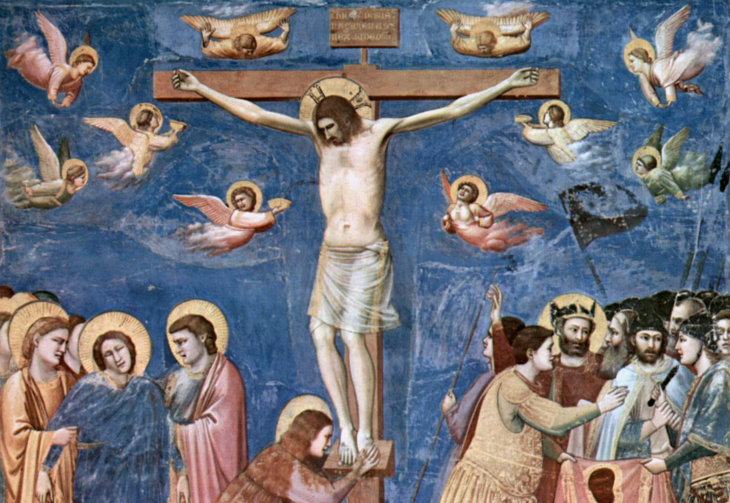 A Homily for Good Friday

The world dies today. In the death of Jesus, it passes away. And like many a death, despite all the struggle, the end comes quietly.

Jesus said, “I thirst.”
There was a vessel filled with common wine.
So they put a sponge soaked in wine on a sprig of hyssop
and put it up to his mouth.
When Jesus had taken the wine, he said,
“It is finished.”
And bowing his head, he handed over the spirit (Jn 19:28-30).

The death of someone whom we dearly love is unlike other deaths because the loved one takes the world away with them. There is nothing left for us. Only an emptiness and pain that congeals into something we learn to call our hearts.

But if the world dies today on the cross of Christ, why does so much of the world not take notice, why is it not moved to tears? I would answer: A heart cannot break if it has never loved, and a heart congealed is constant but cold.

But if the world dies today on the cross of Christ, why does so much of the world not take notice, why is it not moved to tears?

The church has known this from the start. The act of revelation entrusted to her is single, indivisible. Until the savior appears, we do not see the need for our salvation. Only when his heart is pierced—when we know who he is and why he has died—do our hearts begin again to bleed and to beat. Until then they are congealed and cold. We stew in a simmering sadness, and we think that this is the way of the world.

Emerging from a two-year prison sentence of hard labor, in a manner only the 19th century could devise, Oscar Wilde wrote a poem called “The Ballad of Reading Gaol.” A man murders the woman he loves.

The man had killed the thing he loved
And so he had to die.
He will be hung, for that is the way of the world.

Some will find what follows in the poem entirely too dark, too damning. Others see the poet indicting us, our way of living in the world. The poem is not Gospel, yet it seems so accurately to speak of Judas, of Peter, of Pilate and, of course, of us.

Yet each man kills the thing he loves
By each let this be heard,
Some do it with a bitter look,
Some with a flattering word,
The coward does it with a kiss,
The brave man with a sword!

Some love too little, some too long,
Some sell, and others buy;
Some do the deed with many tears,
And some without a sigh:
For each man kills the thing he loves,
Yet each man does not die.

In preaching Christ crucified, the church reveals both our guilt and our redemption. A love that cannot step free of self eventually kills what it loves. When we love selfishly, we kill the thing we love, but we do not die. We congeal into something hard and lifeless. This is the very sign of our sin, the stain the savior soaks and shrives in blood.

Today, the church proclaims the death of the world. It passes away in the death of Jesus, but only for hearts that can still be broken.

Today, the church proclaims the death of the world. It passes away in the death of Jesus, but only for hearts that can still be broken. There is God’s great irony! It is only the utter misery of the God-made-man that reveals the misery of our world, of men and women without God.

Each man kills the thing he loves.
And we have killed our Christ.
His blood now betrays our guilt
As it washes way the stain.