Pope Francis: A second meeting with the Russian Orthodox patriarch is ‘on the not-distant horizon’ 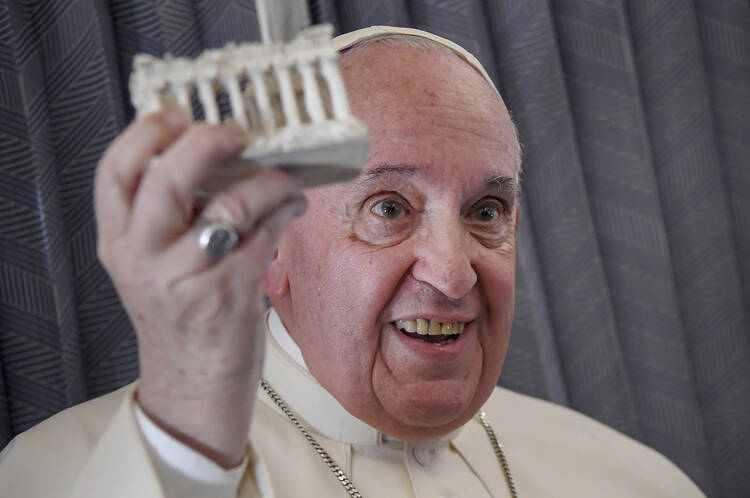 Pope Francis greets the journalists onboard the papal plane on the occasion of his five-day pastoral visit to Cyprus and Greece, Monday, Dec. 6, 2021. (Alessandro Di Meo/Pool photo via AP)

Pope Francis revealed that a second meeting between him and the Russian Orthodox Patriarch of Moscow is under consideration. “It’s on the not-distant horizon,” he said.

He said that Metropolitan Hilarion Alfeyev, the foreign envoy for the Patriarchate of Moscow and a permanent member of its synod, “will come to me next week to reach agreement on a possible meeting.”

A pope and Moscow patriarch met for the first time since the 1,000-year-old schism between the Catholic Church and Eastern Orthodox Church when Pope Francis and Patriarch Kirill met at José Martí International Airport near Havana, Cuba., on Feb. 12, 2016.

Pope Francis revealed that a second meeting between him and the Russian Orthodox Patriarch of Moscow is under consideration. “It’s on the not-distant horizon,” he said.

Francis broke the news of a possible second visit in answer to a question from Vera Shcherbakova, the Itar-Tass correspondent in Rome, during a press conference on the flight back from Athens to Rome, Dec. 6. She noted that Francis had visited the Orthodox leaders in both Cyprus and Greece “and had said most beautiful words on communion and reunification.” She asked, “When will you meet Kirill, what common projects do you have, and what difficulties are you encountering on this journey?”

“An encounter with Patriarch Kirill is on the not-distant horizon,” Pope Francis replied. “I believe that Hilarion will come to me next week to agree a possible encounter.” He said that he is “always ready to go to Moscow to dialogue with a brother,” even if diplomatic protocols are not yet in place.

“Because talking with a brother, there are no protocols,” Francis told reporters. “We are brothers. We say things to each other’s face like brothers.”

Pope Francis said that he is “always ready to go to Moscow to dialogue with a brother,” even if diplomatic protocols are not yet in place.

“It is good to see brothers arguing,” he said, “because we belong to the same mother, mother church. But we’re a little divided…. But we must seek to move forward together, to work and to walk in unity and for unity.”

“I am grateful to Hieronymous, Chrysostomos and to all the patriarchs that have this desire to walk together,” Francis said.

He recalled that “the great Orthodox theologian is studying eschatology and, joking, once said, ‘We will find unity in the escathon! There will be unity there!’”

“But it is just a way of saying: We should not remain firm (unmoved), waiting until theologians reach agreement. It’s like what [Ecumenical Patriarch] Athenagoras is said to have said to Paul VI: Let us put all the theologians on an island to discuss, and we will go together on another side.”

“But this was a joke,” Francis said. “Let the theologians continue to study because this does us good, and it will bring us to understand well how to find unity.”

“In the meantime, however, let us go forward together, praying together, doing charity together,” he said. “In Sweden, I think, the Lutherans and Catholics do charity work together. They work together and pray together. We can do this also; the theologians can do the rest, which we do not know how to do.”