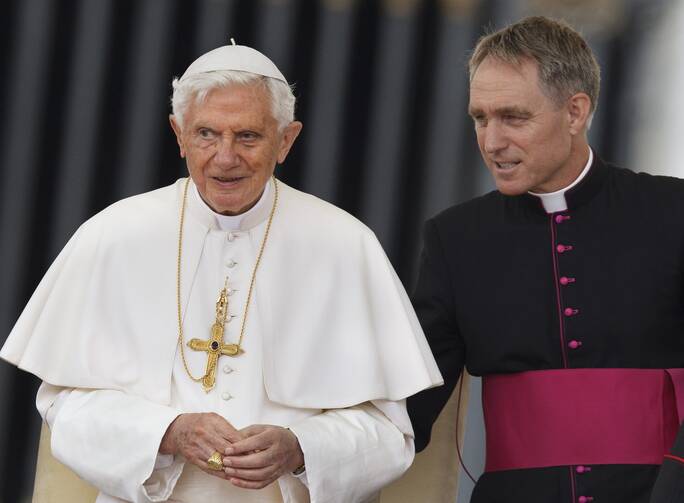 Pope Benedict XVI and his personal secretary, then-Msgr. Georg Gänswein, are seen at the pope's general audience in St. Peter's Square at the Vatican in this Sept. 26, 2012, file photo. (CNS photo/Paul Haring)

Hamburg (KNA) The private secretary of Benedict XVI, Archbishop Georg Gaenswein, has defended the former pope and criticised the Munich abuse report which made international headlines when it was released in January.

The report alleges misconduct by Benedict in dealing with four abusers during his time as Munich Archbishop Joseph Ratzinger from 1977 to 1982. “Not one of the allegations stood up to scrutiny of the files,” Gaenswein said in an interview with the newspaper Die Zeit due to be published on Thursday. The report was “in reality an indictment.” The former pope had nevertheless been right to provide testimony for it. “What a storm would have broken over him if he had refused!”

Gaenswein said Benedict had committed a “serious oversight” with his statement about a meeting on January 15, 1980, in which a decision was taken about a priest who was an abuser. At first, Benedict XVI denied taking part in the meeting, but he later corrected this. That is why some people had accused him of lying. This accusation “hurt” the 94-year-old, said Gaenswein.

He said the pope’s participation in the report had been demanding. In order to answer the catalogue of questions, 8,000 pages of archives had to be sifted through, and many of the questions had been “uncleanly and downright suggestively formulated.”

Gaenswein also commented on his relationship with Francis. Regarding his continuing “leave of absence” ordered by the pope in 2020, he said: “That hurt me (...). In the end I could only say: I don’t understand this decision, but if that is your last word, then I accept it in obedience.”

Regarding Benedict’s statements since his resignation in 2013, Gaenswein said: “What the emeritus publishes under his name, he writes only himself, not me.” He also denied that Benedict had resigned over the abuse scandal. Nor had he taken a vow of silence, said Gaenswein. Regarding the claim that there have been two popes since then, Gaenswein remarked: “There is only one pope, and his name is Francis; and there is only one papal magisterium, and that is exercised by Francis.”
More: Pope Benedict XVI / Vatican / Sexual Abuse