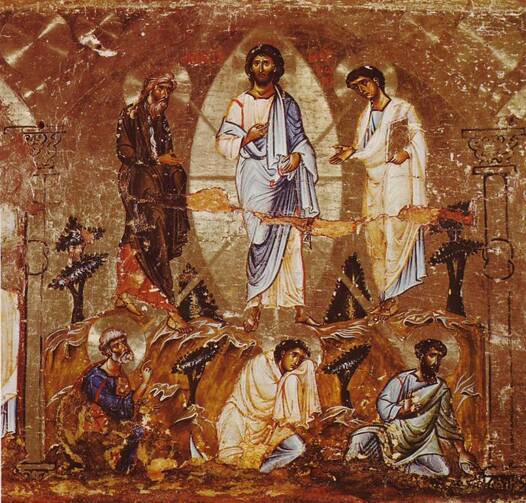 A Homily for the Second Sunday of Lent

“Hey mister. You got a bathroom in there?” I had come out the back door of our former convent, which is now used as parish offices. It is adjacent to our school playgrounds. The secretary needed something, which I had forgotten to bring with me. I had promised to make a trip to the rectory and be right back with it.

“You got a bathroom in there?” The boy was 6 or 7 years old, but he was not a student at our parochial school. The youngest students there, if they don’t address me as “Father,” use my other appellations, Jesus or God. He was clearly in some distress; his hands were folded over his groin.

After hesitating a moment, I said, “Sure, there’s one right inside the backdoor.” Sister Margaret Mary, in full habit, had pushed me into that small space to wash my chin of blood and sand when I was, now that I think about it, his age. As I headed to the rectory, I heard, “You do the watering around here. Huh?” I had just returned from the gym, and I had indeed been moving lawn hoses.

As I returned, he had just exited the back door of the former convent. “You sure got a nice house, mister.”

“Lordy,” I thought. “If he thinks the old convent is nice, he should see the rectory.”

“No. That’s offices. I live over there.” I pointed, rather proudly, toward my temporary home. Not bad for a lawn care worker.

In his commentary on the Book of Job, St. Thomas Aquinas rejects the notion that our lives are governed by chance, insisting that they stand under the continual providence of God. Yet even if we grant that God allows suffering as a punishment for our sins or as a means of strengthening us, we are still left with a terrible imbalance. The good should be blessed and the evil punished. They should not suffer the same fates. One need only think of the people of Ukraine to see Thomas’ point.

That is why, Aquinas insists, this life cannot be all there is. There must be something after death, something that vindicates the goodness of God and his saints. In one of his loveliest passages, St. Thomas conjectures that God must see a great beauty and dignity in us, hints of a life to which we are destined, a life that is revealed in the Transfiguration of the Christ.

For if man is considered only as he appears exteriorly, he seems small, fragile and perishable. So, it would be astonishing for God to have such great care for man unless he should have something hidden, which makes him capable of perpetual existence…. [I]f there were no other life for man except life on earth, man would seem not worth such great care God has for him. Therefore the very care which God has especially for man demonstrates that there is another life of man after the death of the body (Commentary on the Book of Job, c. 7, lect. 4).

St. Thomas understood that suffering suffuses creation. Yet the world of nature, as it stands, makes sense. One animal kills another, yet both species survive. For Thomas, the issue was the evil, which God permits us to inflict upon each other. The saint insists that, if God is just, there must be a resurrection of the dead, either to righteousness or to punishment.

God’s moral creation, though it suffers the assaults of evil, will not be shaken nor become unbalanced. The good will prevail.

Jesus of Nazareth had them as well, dreams and destinies. Therefore, in his Transfiguration, those who will soon see him suffer are given a glimpse of his fully divine and fully human life that is yet to come. The prophets stand on either side of Christ because God’s providence is in play. The suffering to come on Calvary is not capricious; it does not stand apart from God’s care and concern.

This is not a conflict between species that nature ultimately, if left alone, balances. This is a human being. So, even before he freely goes to his death, something of his life to come is revealed. We are given a glimpse of God’s multi-storied, two-dimensional design.

When he had finished instructing his little community in Philippi, St. Paul admonished them:

Our citizenship is in heaven,
and from it we also await a savior, the Lord Jesus Christ.
He will change our lowly body
to conform with his glorified body
by the power that enables him also
to bring all things into subjection to himself (Phil 3:20-21).

For St. Thomas, as for St. Paul, it was clear. God is all powerful, yet God permits human suffering. Even so, God’s moral creation, though it suffers the assaults of evil, will not be shaken nor become unbalanced. The good will prevail; the evil will be punished. On Mount Tabor, in the transfigured flesh of Christ, God reveals our human dignity and the glory yet to come. On the mount of Calvary, when that flesh is pierced for our sins, we clearly see that God is not unmoved by human suffering.

Confession: The Act of Contrition and words of absolution to get a new translations starting this Lent
The experience of the sacrament of penance in the Roman rite will be slightly different this Lent, thanks to approved changes in the English translation set to take effect in a few weeks.
Gina Christian – OSV NewsJanuary 31, 2023