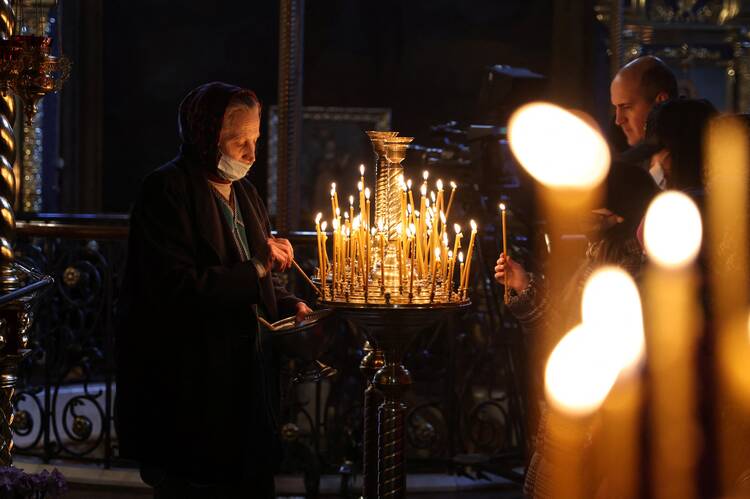 Worshippers light candles as they attend a prayer service at St. Michael's Cathedral of the Orthodox Church of Ukraine in Kyiv Feb. 20, 2022. (CNS photo/Umit Bektas, Reuters)

Pope Francis made a heartfelt appeal for peace in Ukraine at his public audience in the Vatican on Feb. 23 as the situation continued to deteriorate between Russia and Ukraine. He appealed to the consciences of “those with political responsibility” and “all the parties involved” to “refrain from any action that would cause even more suffering to the people, destabilizing coexistence between nations and bringing international law into disrepute.”

He also appealed “to everyone, believers and nonbelievers alike” to make March 2—Ash Wednesday—“a day of prayer and fasting for peace.”

Francis looked distressed, his voice betraying emotion, as he addressed hundreds of pilgrims from around the world in the Vatican’s Paul VI Audience Hall this morning. He had been briefed on the alarming crisis and the threat that Russia would invade Ukraine, a nation of 44 million people that gained its independence in 1991 following the collapse of the Soviet Union. Ukraine is the second-largest country in Europe by area, after Russia.

On Monday, Feb. 21, Vladimir Putin, the president of the Russian Federation, announced that his country was recognizing two breakaway republics—Donetsk and Lukarsk—in the Donbas region in the southeastern part of Ukraine that shares a border with Russia. The two republics have a predominantly ethnically Russian population. President Putin’s decision, in violation of international law, drew widespread condemnation from most countries in the world and risked sparking a war if, as he promised, he were to send Russian troops into the two republics “to protect the peace.” Already more than 150,000 Russian troops, aircraft and naval vessels are amassed around Ukraine, including 30,000 in Belarus in what is now the largest gathering of the military forces in Europe since World War II.

Francis looked distressed, his voice betraying emotion, as he addressed hundreds of pilgrims from around the world in the Vatican’s Paul VI Audience Hall this morning.

The Russian president wants Ukraine to formally agree not to join NATO nor host weapons that could be a threat to his country. He also wants Ukraine and the international community to accept that the two breakaway republics are no longer part of Ukraine.

Mr. Putin’s decision has already caused the United States, the United Kingdom and the 27 countries of the European Union to impose a first round of economic sanctions on Russia, with the promise of even stronger sanctions if Russia invades Ukraine. The crisis has caused turbulence in international markets and is provoking a rise in the price of gas, oil and other commodities.

“My heart aches greatly at the worsening situation in Ukraine,” Pope Francis remarked today. “Despite the diplomatic efforts of the last few weeks, increasingly alarming scenarios are opening up,” he said, “and like me, many people all over the world are feeling anguish and concern. Once again the peace of all is threatened by partisan interests.”

[Related: 10 ways to avoid a devastating war in Ukraine]

For weeks now, diplomatic efforts involving European leaders from Germany, France and Britain, as well as from the United States, have failed to work out a diplomatic solution to the crisis. Yesterday, diplomatic efforts seemed to collapse with the decision of U.S. Secretary of State Antony Blinken and President Joe Biden not to meet with their Russian counterparts.

Today, Pope Francis made a personal plea to political leaders, saying, “I would like to appeal to those with political responsibility to examine their consciences seriously before God, who is the God of peace and not of war; who is the Father of all, not just of some, who wants us to be brothers and not enemies.”

“Jesus taught us that the diabolical senselessness of violence is answered with God's weapons, with prayer and fasting,” the pope said

Pope Francis called on all people, “believers and nonbelievers alike,” to pray and fast for peace next Wednesday, March 2, which for most Christians is also Ash Wednesday and the beginning of Lent. “Jesus taught us that the diabolical senselessness of violence is answered with God's weapons, with prayer and fasting,” the pope said. “I encourage believers in a special way to dedicate themselves intensely to prayer and fasting on that day.”

He concluded with a prayer: “May the Queen of Peace preserve the world from the madness of war.”

Meanwhile in Kyiv, the capital of Ukraine, a city of 2.8 million people, the Major Archbishop of the country’s Greek-Catholic Church, His Beatitude Sviatoslav Shevchuk, in a message made public today, denounced Russia’s violation of international law by recognizing the two breakaway republics and called on his fellow Ukrainian citizens to defend their country. He said: “To defend our fatherland is our natural right and our civic duty. We are strong when we stand together. The moment has now arrived to unite our forces to defend the independence, the territorial integrity and the sovereignty of the [Ukrainian] state. It is the duty and responsibility of all humanity to commit itself today to prevent the war and [to] protect a just peace.”

The president of the German bishops’ conference, Bishop Georg Baetzing, also expressed today the German bishops’ solidarity with Ukraine and criticized the “aggression” by Russia, “which wants to expand its sphere of rule,” KNA, the German Catholic news agency, reported. Bishop Baetzing called for prayers for peace and for all people suffering the consequences of this aggression.

The president of the Polish bishops’ conference, Archbishop Stanislaw Gadeckis, sent a letter to Christian leaders in Russia and Ukraine calling on them to join in prayer for peace. He recalled that Poland, Russia and Ukraine have “a common history and Christian faith” and should “tend not to hatred, but to mutual respect and friendship.”

Read more from America on the conflict in Ukraine: