I’m a ‘traditional’ Catholic. That’s exactly why I love Pope Francis (and am baffled by his critics) 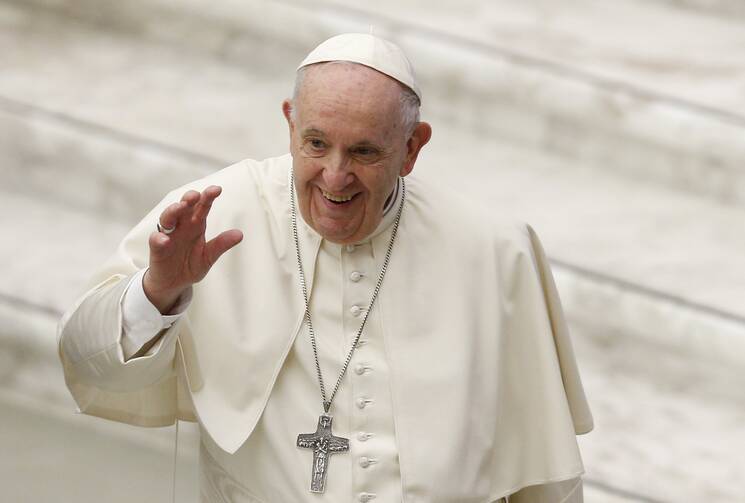 Pope Francis greets the crowd during his general audience in the Paul VI hall at the Vatican Jan. 26, 2022. (CNS photo/Paul Haring)

In March 2013, I watched on television as a man few of us had heard of asked us to do something for him. He asked for our prayers and bowed his head. In March 2020, this same man walked into an empty St. Peter’s Square, flanked by an icon of Mary and the Cross of the Lord. In a world beset with troubles, isolation and sickness, he offered us his prayers.

Much has taken place in the papacy of Pope Francis—moments of joy and dismay—but we should remember these images. They are a key to his papacy and to the renewal of the church. He was a pope asking for prayer; a pope offering prayer.

I am the kind of Catholic who is supposed to be a Pope Francis foe. I think the felt-banner Catholicism of the 1970s was a disaster, discarding much of the patrimony of the church while ignoring the letter and the spirit of the Second Vatican Council. I do not think the church should “get with the times”; the church is the expert in humanity and divinity. I firmly believe that we are not to conform to the times but to renew the church by returning to the sources of our faith: the tradition as transmitted by the magisterium and the whole people of God.

And for these reasons, I support Pope Francis.

We are not to conform to the times but to renew the church by returning to the sources of our faith: the tradition as transmitted by the magisterium and the whole people of God.

Pope Francis confounds our expectations because our expectations tend to be shaped by the world. For many on the political left, his papacy is the time to create a new church conformed to the times as a spiritual non-profit agency. Rather than seeing the lines Francis draws, many proclaim his initiatives to be “steps” in the right direction, steps toward crossing the lines of Catholic teaching.

Far more painful for me has been the response to Francis from many of my fellow traditionally minded Catholics. A theologian described “Traditionis Custodes,” the pope’s recent motu proprio restricting the use of the extraordinary form of the Latin Mass, to me as a bad-faith reaction to “three people on Twitter.” The good news, according to them, was that Pope Francis will die soon enough.

This fits a pattern of discussion by Francis’ critics expressed in the snide use of the name “Bergoglio,” the negative hermeneutic applied to what Pope Francis says, and the disregard of papal initiatives that would in other circumstances make traditionalists cheer—the celebration of Dante, the elevation of St. Irenaeus as a doctor of the church, the institution of the Year of St. Joseph. Having myself learned how important it is to be committed to the papacy from Catholic traditionalists, I find it dizzying and dispiriting to hear the vitriol launched at our current pontiff.

The pope is praying for us; let us pray for him. Let us share his confidence in Christ.

Both critics and supporters fail to see the traditionalism of Francis. Let me highlight three forms of his traditionalism. First, to actually be a traditional Catholic means supporting and carrying out the reforms of Vatican II. Francis guards this tradition from those of us who think Vatican II is optional or regrettable. It is neither; it is an essential guide to being Catholic in the modern world and a hermeneutical key to understanding the fullness of our 2,000-year tradition.

Second, one of the tasks of the pope is to send missionaries out to the world. Gregory sent Augustine to England, Honorius sent Dominicans to Poland, Paul III sent missionaries to the Americas and Francis sends us out “to reach the fringes of humanity.” Many of us at the center of the church are reluctant to do this. We can be too keen on closed doors, national identities or a Donatist vision of a smaller, purer church. But the essence of the Gospel is spreading the Gospel. For Francis, the inner life of the church is going to those outside of the church. What are we to do? Invite them into the church, for it is within that we fully encounter Christ. This might not sound all that new, but then Francis is pretty traditional.

Third, at the heart of Francis’ traditionalism are the images I used in opening this essay: a pope asking for prayer, a pope offering prayer. This is the lex orandi of Francis’ papacy, the law of prayer that shapes his ministry and teaching. In his annual “Urbi et Orbi” address, Francis calls us to “prayer and quiet service.” He reminds us to be confident in these, “our victorious weapons.” In the face of a global pandemic, Francis has the confidence that prayer and works of mercy are the paths to victory.

Just as Peter relied on Jesus, the pope teaches us that we must rely on the Lord.

This confidence is essential to the Petrine office. Just as Peter relied on Jesus, the pope teaches us that we must rely on the Lord. Francis teaches that “by ourselves we flounder: We need the Lord, like ancient navigators needed the stars.”

Yes, I worry about the Synod on Synodality. I am concerned that too many see it as a chance to radically change the church (as in the disastrous German synod), and that the synod will diffuse ecclesial authority in ways that undermine doctrinal unity. What we need is not a different church but the church more fully actualized. And yes, I struggle with what seems like a lack of priority on liturgical reverence and doctrinal clarity. But when I pay attention to his teaching, I find time and again his message: “Embrace the Lord in order to embrace hope.”

The pope is praying for us; let us pray for him. Let us share his confidence in Christ. Let us join him in guarding the tradition and preaching the good news. 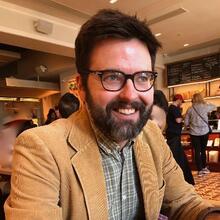 Terence Sweeney is an adjunct professor of philosophy at Villanova University and Theologian-in-Residence at the Collegium Institute at the University of Pennsylvania.

@TerenceJSweeney
Show Comments ()
Join the conversation: Login or create an account
Before you can comment, you need to update your profile to include your first and last name, as required in our comments policy. Then reload this page and you'll be set up for commenting. Update your profile