Pope Francis: God is not frightened by our sins 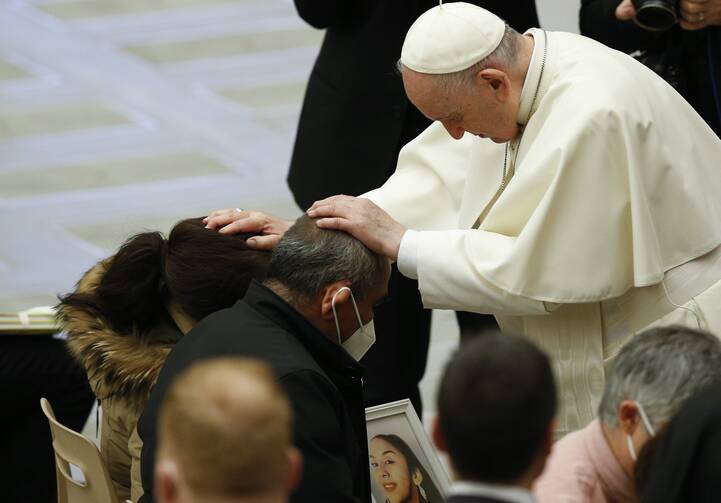 Pope Francis blesses people during his general audience in the Paul VI hall at the Vatican on Jan. 19, 2022. (CNS photo/Paul Haring)

Below is the text of Pope Francis’ weekly Wednesday audience, delivered on Jan. 19, 2022.

Today, I would like to explore the figure of St. Joseph as a father in tenderness.

In my Apostolic Letter “Patris corde” (8 December 2020), I had the opportunity to reflect on this aspect of tenderness, an aspect of St. Joseph’s personality. In fact, although the Gospels do not give us any details about how he exercised his paternity, we can be sure that his being a “just” man also translated into the education he gave to Jesus. “Joseph saw Jesus grow day by day ‘in wisdom and age and favor before God and man’” (Lk 2:52): so the Gospel says. As the Lord had done with Israel, so Joseph did with Jesus: “he taught him to walk, taking him by the hand; he was for him like a father who raises an infant to his cheeks, bending down to him and feeding him (cf. Hos 11:3-4).” (Patris corde, 2). It is beautiful, this definition in the Bible, that shows God’s relationship with the people of Israel. It is the same relationship, we think, that there was between St. Joseph and Jesus.

The Gospels attest that Jesus always used the word “father” to speak of God and his love. Many parables have as their protagonist the figure of a father. One of the most famous is certainly that of the merciful Father, recounted by Luke the Evangelist (cf. Lk 15:11-32). This parable emphasizes not only the experience of sin and forgiveness, but also the way in which forgiveness reaches the person who has done wrong. The text says: “While he was still a long way off, his father caught sight of him, and was filled with compassion. He ran to his son, embraced him and kissed him” (v. 20). The son was expecting a punishment, a justice that at most could have given him the place of one of the servants, but he finds himself wrapped in his father’s embrace.

Tenderness is something greater than the logic of the world. It is an unexpected way of doing justice. That is why we must never forget that God is not frightened by our sins.

And it is beautiful to think that the first person to transmit this reality to Jesus was Joseph himself. For the things of God always come to us through the mediation of human experiences.

Long ago—I don’t know if I have already told this story—a group of young people who did theatrical drama, a pop theater group, ahead of the curve, was struck by this parable of the merciful father and decided to create a pop theater production on this matter, with this story. And they did it well. And the story is that, at the end, a friend listens to a son who is estranged from his father, who wanted to return home but was afraid that his father would kick him out and punish him.

Tenderness is not primarily an emotional or sentimental matter: It is the experience of feeling loved and welcomed precisely in our poverty and misery, and thus transformed by God’s love.

And the friend said, “Send a messenger to say that you want to return home, and if your father will receive you, to put a handkerchief in the window, the one you can see as soon as you take the last part of the path home.” And this was done. And the work, with singing and dancing, continues until the moment that the son turns onto the last stretch of the road and sees the house. And when he looks up, he sees the house full of white handkerchiefs: full of them. Not one, but three or four in every window. This is God’s mercy. He is not deterred by our past, by the bad things we have done; settling the accounts with God is a beautiful thing, because we begin to talk, and he embraces us. Tenderness!

So, we can ask ourselves if we ourselves have experienced this tenderness, and if we in turn have become its witnesses. For tenderness is not primarily an emotional or sentimental matter: It is the experience of feeling loved and welcomed precisely in our poverty and misery, and thus transformed by God’s love.

God does not rely only on our talents, but also on our redeemed weakness. This, for example, makes St. Paul say that there is also a plan for one’s fragility. In fact, he wrote to the community of Corinth: “And to keep me from being too elated by the abundance of revelations, a thorn was given me in the flesh, a messenger of Satan, to harass me.... Three times I besought the Lord about this, that it should leave me; but he said to me, ‘My grace is sufficient for you, for my power is made perfect in weakness.’” (2 Cor 12:7-9). The Lord does not take away all our weaknesses, but helps us to walk on with our weaknesses, taking us by the hand. He takes our weaknesses by the hand and places himself by our side. And this is tenderness.

It does us good...to mirror ourselves in Joseph’s fatherhood, which is a mirror of God’s fatherhood, and to ask ourselves whether we allow the Lord to love us with his tenderness.

The experience of tenderness consists in seeing God’s power pass through precisely that which makes us most fragile; on condition, however, that we are converted from the gaze of the Evil One who “makes us see and condemn our frailty,” while the Holy Spirit “brings it to light with tender love.” (“Patris corde,” 2).

“Tenderness is the best way to touch the frailty within us.... Look how nurses touch the wounds of the sick: with tenderness, so as not to hurt the further. And this is how the Lord touches our wounds, with the same tenderness. That is why it is so important to encounter God’s mercy, especially in the Sacrament of Reconciliation, in personal prayer with God, where we experience his truth and tenderness. Paradoxically, the evil one can also speak the truth to us: he is a liar, but he can arrange things so that he tells us the truth in order to tell us a lie, yet he does so only to condemn us. Instead, the Lord tells us the truth and reaches out his hand to save us. We know that God’s truth does not condemn, but instead welcomes, embraces, sustains and forgives us.” (“Patris corde,” 2).

Today I want to remember in a special way our brothers and sisters who are in prison.... Those who have done wrong should be able to redeem themselves from their mistake.

It does us good, then, to mirror ourselves in Joseph’s fatherhood, which is a mirror of God’s fatherhood, and to ask ourselves whether we allow the Lord to love us with his tenderness, transforming each one of us into men and women capable of loving in this way. Without this “revolution of tenderness”—there is a need for a revolution of tenderness!—we risk remaining imprisoned in a justice that does not allow us to rise easily and that confuses redemption with punishment.

For this reason, today I want to remember in a special way our brothers and sisters who are in prison. It is right that those who have done wrong should pay for their mistake, but it is equally right that those who have done wrong should be able to redeem themselves from their mistake. They cannot be sentences without a window of hope. Any sentence must always have a window of hope. Let us think of our brothers and sisters in prison, and think of God’s tenderness for them, and let us pray for them, so they might find in that window of hope a way out towards a better life.

And we conclude with this prayer:

teach us to accept that we are loved precisely in that which is weakest in us.

Grant that we may place no obstacle

between our poverty and the greatness of God’s love.

Stir in us the desire to approach the Sacrament of Reconciliation,

our brothers and sisters in their poverty.

Be close to those who have done wrong and are paying the price for it;

Help them to find not only justice but also tenderness so that they can start again.

And teach them that the first way to begin again

is to sincerely ask for forgiveness, to feel the Father’s caress.