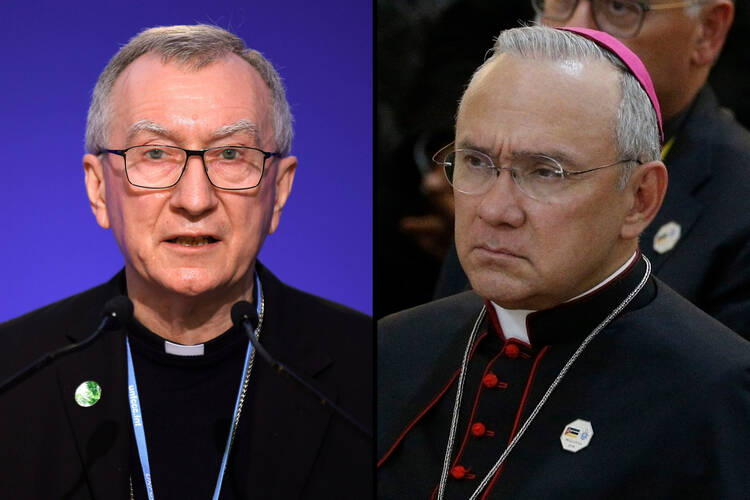 Cardinal Pietro Parolin, the secretary of State at the Vatican (CNS photo/Daniel Leal-Olivas, Reuters pool) and Archbishop Edgar Peña Parra, the substitute in the Secretariat of State. (CNS photo/Paul Haring)

Cardinal Pietro Parolin and Archbishop Edgar Peña Parra, the two most senior advisors to Pope Francis, have tested positive for Covid-19 and are in quarantine.

Matteo Bruni, the director of the Holy See Press Office, told journalists after midday, Rome time today, Jan. 18. He said Cardinal Parolin was experiencing “light symptoms,” while the archbishop is “asymptomatic.” The story was first broken on Twitter last night by British journalist Edward Pentin, a correspondent for the National Catholic Register.

Cardinal Parolin is the pope’s right-hand man and the second-highest ranking official in the Vatican after the pope, an office he has held since Francis appointed him Secretary of State in August 2013. The Italian cardinal celebrated his 67th birthday yesterday, Monday, Jan. 17, but did so while in isolation at his apartment in the Vatican, after he had tested positive for Covid-19 and was experiencing symptoms.

Archbishop Peña Parra, 61, is the substitute in the Secretariat of State, a post equivalent to that of chief of staff, which puts him as the third-highest ranking official at the Roman Curia. The Venezuelan-born archbishop was due to travel this week to Abu Dhabi for the opening of the new nunciature, which was given to the Holy See by the government of the United Arab Emirates. He is asymptomatic but also in isolation in his apartment in the Vatican.

Both the cardinal and the archbishop had received the first, second and booster doses of the Pfizer vaccine—as have almost all officials in Vatican City State, including Pope Francis—sources at the Vatican, speaking on condition of anonymity because they were not authorized to speak, told America. Cardinal Parolin meets privately with the pope, as a matter of course, at least once a week—usually on Mondays—while the archbishop also meets with the pope frequently during the week. It is not known when either was last with Francis.

America has learned that other Vatican officials are also in isolation at the present time, including at least one who tested positive for Covid-19 and a number who have been in direct contact with persons who have tested positive for the virus and so must, by law, be in quarantine. Their names, however, have not been made public.

Both the cardinal and the archbishop had received the first, second and booster doses of the Pfizer vaccine—as have almost all officials in Vatican City State, including Pope Francis.

The Vatican has recently introduced new norms, in line with Italian legislation, restricting unnecessary travel and limiting by one-third the number of persons that can participate in meetings, in an all-out effort to try to prevent the further spread of variants of the Covid-19 virus, especially to shield against the omicron variant, which in some cases has proven vaccine-resistant. In Italy—which has a population of roughly 59 million people—there are currently more than 2.5 million cases of Covid-19; most are caused by the omicron variant, and the number of cases is expected to increase, including in the Vatican.

Worldwide, more than 25 cardinals have contracted Covid-19; three have died of causes related to the virus. At the Roman Curia, a number of cardinals have also been infected with the virus, including Giuseppe Bertello, who at the time was president of the governorate of Vatican City State; Konrad Krajewski, the papal almoner; and Luis Antonio Tagle, the prefect of the Congregation for the Evangelization of Peoples. Several other Vatican officials have contracted the virus over the past two years, as well as dozens of members of the Swiss Guard and Gendarmerie Corps of the Vatican City State.