What did Pope Francis actually say about having pets or kids? 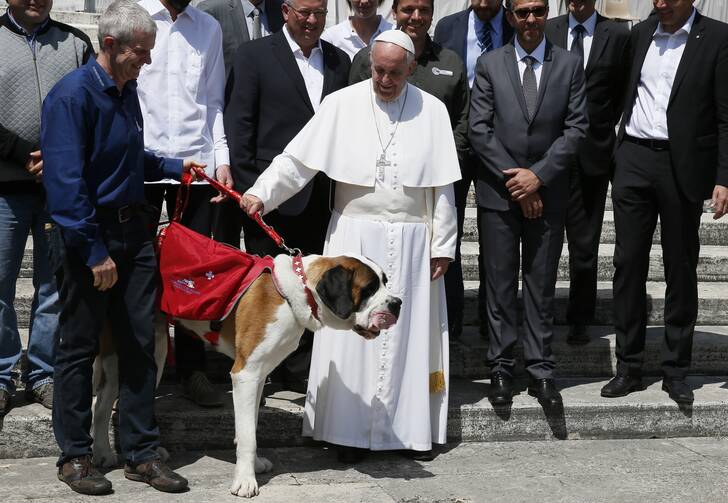 Pope Francis holds the leash of a St. Bernard during his general audience in St. Peter's Square at the Vatican May 18, 2016 (CNS photo/Paul Haring)

The following is an edited transcript of a podcast conversation between hosts Zac Davis and Ashley McKinless posted on Jan. 6 to Jesuitical’s Patreon community. For more exclusive episodes, you can support Jesuitical on Patreon here.

The story is everywhere, so we wanted to give a little context and some thoughts.

Ashley McKinless: Every Wednesday, Pope Francis gives a general audience in which he does some catechesis. He’s currently in a series of catechesis on St. Joseph. This Wednesday’s audience was mostly about the role of St. Joseph as an adoptive father. It was a celebration of adoption as “among the highest forms of love.”

And then, in an offhand comment, he talks about how some people choose to have pets instead of kids.

This Wednesday’s audience was mostly about the role of St. Joseph as an adoptive father. It was a celebration of adoption as “among the highest forms of love.”

He’s also not saying that people need to have as many children as possible, regardless of their ability to care for them. There was a time where he’s also said that Catholics don’t need to “breed like rabbits.”

So let’s get into what he’s actually saying here. He’s made this point before, right?

AM: Right. In 2014, he had an interview where he spoke about the state of civilization in Europe. He says that after food, clothes and medicines, people spend the most money on cosmetics and pets. The interviewer asked: “Do animals count more than children?” And Pope Francis called people opting for pets instead of kids a phenomenon of cultural degradation. He said: “This is because the emotional relationship with animals is easier, more programmable. An animal is not free, while having a child is a complex thing.”

So it’s not news that the pope thinks it’s good for married couples to have children.

ZD: And we should say that he’s not making this phenomenon up. Birth rates are down and pet ownership is up. He is talking about what’s called Europe’s demographic winter.

[Pope Francis: Countries with declining birthrates are ‘rich in resources but poor in hope’]

AM: And [he’s speaking] in the context of high-income countries with robust social safety nets. I think he really is addressing people who are in the position where they could opt to have children and instead are spending a lot of money on pets.

ZD: And outside of Europe, there’s a Latin American context here. Sam Rocha tweeted something I thought was smart. He says, quote, “When you come from a place where people live like dogs, it is scandalous to see dogs live like people.” I feel like that has been left out of the conversation a bit.

He really is addressing people who are in the position where they could opt to have children and instead are spending a lot of money on pets.

But we should ask: Why are people upset about this? Because it seems people are really mad. And I think there’s some genuine reason for that. Issues over childbearing are deeply personal and deeply fraught. Right? They’re complicated, they’re messy. They involve lots of sacrifice and discernment.

AM: I’m a little nervous to comment on this as someone who is not married, doesn’t have kids and does not currently have pets. So I don’t experience that same visceral reaction.

But a segment of the population that I think kind of felt this as a personal attack—understandably given the way it was presented in mainstream media—are people who struggle with infertility and would like to have kids and have not been able to. So to see a headline that suggests that not having kids is in some way selfish would be painful. And I don’t want to minimize that.

To see a headline that suggests that not having kids is in some way selfish would be painful. And I don’t want to minimize that.

ZD: And it’s unfortunate, too, because I thought the general theme of his address about the spiritual value of adoption and different types of parenthood was a really good one. And something that a lot of people would benefit from hearing. A lot of people have messy families or different families and having some validation that familial love can come from different places is a message worth getting out there.

AM: Another response was that adoption is really hard and sometimes it is expensive and sometimes you have a child who comes from a very troubled background and it’s a difficult thing to do. [But] the pope doesn’t ignore that. He does say that adoption is a risk and a sacrifice. But for the Catholic Church to call people to extraordinary acts of love and sacrifice is to be expected.

ZD: I think another reason people are upset is because anyone who’s ever owned a pet and loved a pet knows that they are legitimate sources of joy and God’s grace in the world. We do treat them and love them like they’re part of our families. And I think that they can teach us things about how to be better humans. And people are feeling like this is “crotchety old man Francis” railing against a good thing that they have in their lives.

Whether you like it or not, the church is probably always going to have an opinion about your personal life and your family. It’s kind of how we do things.

ZD: He is. He might be the vicar of Christ on earth, but he is sometimes also a grumpy old man.

So to sum up, there is more to the pope’s comments than what you read in the headline. It was an offhand comment, but it also does reflect something he actually believes. And whether you like it or not, the church is probably always going to have an opinion about your personal life and your family. It’s kind of how we do things. And it’s O.K. to wrestle with that and engage with that. That’s all part of the fun.

I’m a vegetarian and a dog dad. I’m all for animal liberation and animal rescue efforts. But, I wouldn’t say that this was meant to be the overriding point of the homily. At some level, you could also see this as a beautiful homily that stresses the dignity of adoptive parenthood.

I’ve never read a statement that does that from any pope or saint or major church leader of any kind. As someone who was raised by a stepdad, it validated my relationship with my stepfather. I doubt I am the only one who has always wanted someone to say something similar.

I’m just providing the counterpoint. [Others’] perspective is still valid. I understand that it feels hurtful, especially coming from a pope you might feel is “on your team.”

Perhaps a positive spin about how much of a good thing it is to have children and how valuable it is would have been better? After having two kids and being pregnant with my third, I am aware of how much work and how life-changing it is. I am also aware of how much it is not valued and even diminished as a non valuable thing by society generally. It helps to have motherhood and parenthood affirmed as a valuable thing, but this statement appears to be saying people who choose not to have children are selfish rather than honoring those who have had children.

I think almost anything would have been better. I chose not to have children for various reasons, but I also take that free time to support my friends and family with children. I think all in all, his entire observation comes from a care for orphaned children (good!), but the solution of “everybody just adopt” comes across as overly simplistic.