Pope Francis: Adoption is among the highest forms of love. St. Joseph knew this. 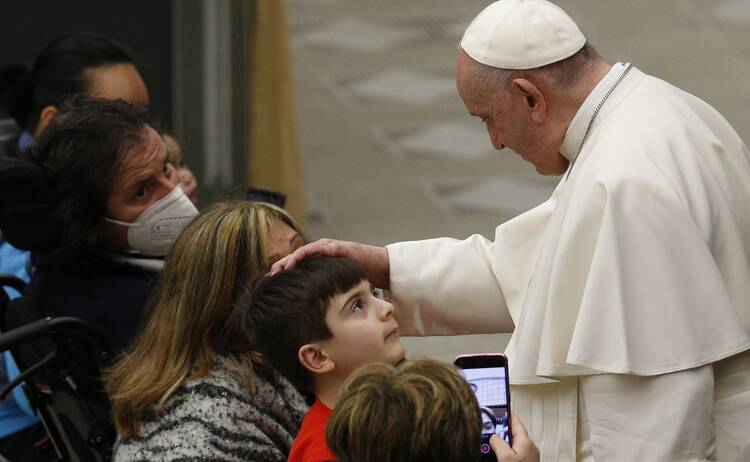 Pope Francis greets a boy during his general audience in the Paul VI hall at the Vatican Jan. 5, 2022. (CNS photo/Paul Haring)

Below is the text of Pope Francis’ weekly Wednesday audience, delivered on Jan. 5, 2022.

Today we will reflect on Saint Joseph as the father of Jesus. The evangelists Matthew and Luke present him as the foster father of Jesus, and not as his biological father. Matthew specifies this, avoiding the formula “the father of,” used in the genealogy for all the ancestors of Jesus; instead, he defines Joseph as the “husband of Mary, of whom Jesus was born, who is called Christ” (1:16). Luke, on the other hand, affirms it by saying that he was Jesus’ “supposed” father (3:23), that is, he appeared as His father.

To understand the alleged or legal paternity of Joseph, it is necessary to bear in mind that in ancient times in the East the institution of adoption was very common, more so than today. One thinks of the common case in Israel of the “levirate,” as formulated in Deuteronomy:

“If brothers dwell together, and one of them dies and has no son, the wife of the dead shall not be married outside the family to a stranger; her husband’s brother shall go in to her, and take her as his wife, and perform the duty of a husband’s brother to her. And the first son whom she bears shall succeed to the name of his brother who is dead, that his name may not be blotted out of Israel” (25:5-6).

In other words, the parent of this child is the brother-in-law, but the legal father remains the deceased, who gives the newborn child all hereditary rights. The purpose of this law was twofold: to ensure the descendants of the deceased and the preservation of the estate.

As the official father of Jesus, Joseph exercises the right to impose a name on his son, legally recognising him. Legally he is the father, but not generatively; he did not beget Him.

In ancient times, the name was the compendium of a person’s identity. Changing one’s name meant changing oneself, as in the case of Abraham, whose name God changed to “Abraham,” which means “father of many,” “for,” says the Book of Genesis, he will be “the father of a multitude of nations” (17:5). The same goes for Jacob, who would be called “Israel,” which means “he who struggles with God,” because he struggled with God to compel Him to give him the blessing (cf. Gen 32:29; 35:10).

But above all, naming someone or something meant asserting one’s authority over what was named, as Adam did when he conferred a name on all the animals (cf. Gen 2:19-20).

Joseph already knows that, for Mary’s son, a name had already been prepared by God—Jesus’ name is given to him by his true father, God—“Jesus,” which means “the Lord saves”; as the Angel explains, “He will save his people from their sins” (Mt 1:21).

We live in an age of notorious orphanhood, don’t we? It is curious: our civilization is something of an orphan, and this orphanhood can be felt.

This particular aspect of Joseph now enables us to reflect on fatherhood and motherhood. And this, I believe, is very important: thinking about fatherhood today. Because we live in an age of notorious orphanhood, don’t we? It is curious: our civilization is something of an orphan, and this orphanhood can be felt. May Saint Joseph, who took the place of the real father, God, help us to understand how to resolve this sense of orphanhood that is so harmful to us today.

It is not enough to bring a child into the world to also be the child’s father or mother. “Fathers are not born, but made. A man does not become a father simply by bringing a child into the world, but by taking up the responsibility to care for that child. Whenever a man accepts responsibility for the life of another, in some way he becomes a father to that person” (Apostolic Letter Patris corde). I think in a particular way of all those who are open to welcome life by way of adoption, which is such a generous and beautiful, good attitude.

Joseph shows us that this type of bond is not secondary; it is not an afterthought, no. This kind of choice is among the highest forms of love, and of fatherhood and motherhood. How many children in the world are waiting for someone to take care of them! And how many married couples want to be fathers and mothers but are unable to do so for biological reasons; or, although they already have children, they want to share their family’s affection with those who do not have it. We should not be afraid to choose the path of adoption, to take the “risk” of welcoming children. And today, with orphanhood, there is a certain selfishness.

We should not be afraid to choose the path of adoption, to take the “risk” of welcoming children. And today, with orphanhood, there is a certain selfishness.

The other day, I spoke about the demographic winter there is nowadays, in which we see that people do not want to have children, or just one and no more. And many, many couples do not have children because they do not want to, or they have just one—but they have two dogs, two cats... Yes, dogs and cats take the place of children. Yes, it’s funny, I understand, but it is the reality.

And this denial of fatherhood or motherhood diminishes us, it takes away our humanity. And in this way civilization becomes aged and without humanity, because it loses the richness of fatherhood and motherhood. And our homeland suffers, as it does not have children, and, as it has been said somewhat humorously, “and now who will pay the taxes for my pension, if there are no children?”: with laughter, but it is the truth. Who will take care of me?

I ask of Saint Joseph the grace to awaken consciences and to think about this: about having children. Fatherhood and motherhood are the fullness of the life of a person. Think about this. It is true, there is the spiritual fatherhood of those who consecrated themselves to God, and spiritual motherhood; but those who live in the world and get married, think about having children, of giving life, which they will take from you for the future. And also, if you cannot have children, think about adoption.

It is a risk, yes: having a child is always a risk, either naturally or by adoption. But it is riskier not to have them.

It is a risk, yes: having a child is always a risk, either naturally or by adoption. But it is riskier not to have them. It is riskier to deny fatherhood, or to deny motherhood, be it real or spiritual. But denial, a man or woman who do not develop the sense of fatherhood or motherhood, they are lacking something, something fundamental, something important. Think about this, please. I hope that the institutions will always be ready to help regarding adoption, by seriously monitoring but also simplifying the necessary procedure so that the dream of so many children who need a family, and of so many couples who wish to give themselves in love, can come true.

Some time ago I heard the testimony of a person, a doctor—an important profession—who did not have children, and he and his wife decided to adopt one. And when the time came, they were offered a child, and they were told, “But we do not know how this child’s health is. Perhaps he has an illness.” And he said—I saw him—he said, “If you had asked me about this before coming, perhaps I would have said no. But I have seen the child: I will take him with me.” This is the longing to be an adoptive father, to be an adoptive mother too. Do not be afraid of this.

I pray that no one feel deprived of the bond of paternal love. And those who are afflicted with orphanhood, may they go forward without this unpleasant feeling. May Saint Joseph protect, and give his help to orphans; and may he intercede for couples who wish to have a child. Let us pray for this together:

Saint Joseph,
you who loved Jesus with fatherly love,
be close to the many children who have no family
and who long for a daddy and mommy.
Support the couples who are unable to have children,
help them to discover, through this suffering, a greater plan.
Make sure that no one lacks a home, a bond,
a person to take care of him or her;
and heal the selfishness of those who close themselves off from life,
that they may open their hearts to love.