Podcast: Pope Francis is not planning to slow down in 2022 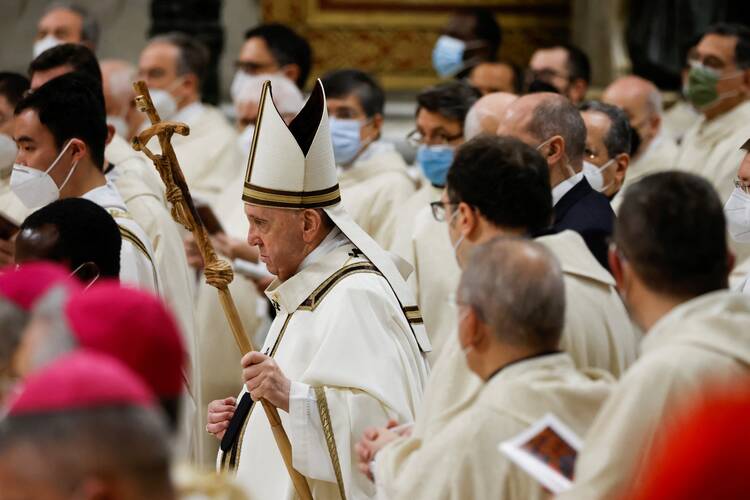 Pope Francis arrives to celebrate Mass for the feast of Epiphany in St. Peter's Basilica at the Vatican Jan. 6, 2022. (CNS photo/Yara Nardi, Reuters)

This week on “Inside the Vatican,” host Ricardo da Silva, S.J.—standing in for Colleen Dulle —and Vatican correspondent Gerard O’Connell survey the pope’s plans for the new year.

Pope Francis has an “action-packed” agenda this year, but the relentless spread of Covid-19 worldwide could complicate his plans to visit countries in Africa, Asia, Europe and the Middle East.

But whether or not the pope is able to travel internationally this year, Gerry says he “is clearly not planning to slow down,” and has much work to do from his desk at the Vatican. Chief among the pope’s tasks this year is the completion of the reform of the Roman Curia which will culminate with the issuing of “Praedicate Evangelium,” a document that will serve as a blueprint for not only a revamp of some of the more dated structures at the Vatican but also intends to usher a change in culture within the Roman Curia.

This year is also expected to bring other significant changes at the Vatican including the appointment of several new high-ranking officers, as some cardinals reach the age of retirement and those over 80 become ineligible to vote in the next papal conclave.

This year, “Francis will really leave his mark on the church in a big way,” Gerry tells Ricardo. “These will be men chosen by him alone, not inherited from a previous pontificate.”

The Election of Pope Francis: An Inside Account of the Conclave That Changed History

Pope Francis on New Year’s Day: “To hurt a woman is to insult God.”

Pope Francis at Midnight Mass: God comes into the world in littleness.